Bohat ALA
Home Projects/Reports The Good, Bad and the Ugly

The Good, Bad and the Ugly

Experience, they say is the best teacher. The experience of working with different organization had exposed me to 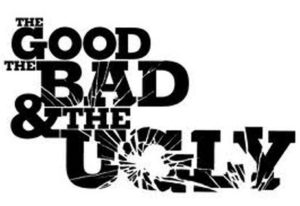 different types of bosses, their attitudes, behaviors, simplicity, weirdness, kindness, and charismatic ability. I have worked with different bosses, employees and customers. I have worked at one of the smaller stores of Wal-Mart, Super K-mart, and The Food Emporium. I did learn a lot during my days working in these organizations. I was exposed to business administration, food technology, processing and packaging and most importantly to boss-employee relationship which was the greatest experience I’ve got so far working at these places. I have learned the classification of bosses based on how respectful and supportive they are to their employees, how they listen to them and understand their needs and problems. Thus far, I have met three species of bosses which I call the good, bad and the ugly.

The good boss is one who is respectful, one who is ready to listen to one’s plight, problems, complaints and situations at any particular point in time. The good boss shows great concern for their employees; they know how to manage the way they get angry at issues relating to their employees. While I was working at The Food Emporium about a year ago, I had this kind of boss who always showed me respect, his pleasantries were excellent and he’s placed himself as a unique boss amidst the bosses I was made to serve and report to. Despite any poor issues or circumstances, he still talked gently to me. There was a time I had issues relating to my register, he just helped to solve the problem without getting infuriated or frustrated. He also takes time to help solve every issues relating to my scheduling. He was really so concerned with my life during my period at this organization as though we were family. He was always bothered about my needs, lacks, and he’s always willing to be adaptive to my calls and sighs.

There was also a time I needed to be off from work, he allowed me without complains. Even whenever I needed any off or needed to leave work early, he would also let me go but I ensured never to take advantage of it. Other times, he always had to give me extra hours of work most especially during summer holidays and when I needed more money for pressing needs. Before I started working, I made up my mind I was going to give in my best for this job and so I did sacrifice all my time and energy carrying out all assigned tasks. When I got started, I submitted my schedule so that he could prepare my work schedule, but after two weeks I changed my schedule because it wasn’t favorable to my present condition as at that time. I thought he would flare up but he just changed it without any grudge or hesitation. He always never stopped praising my good works and for the time I did little bad, he would still encourage me and helped me move on with life. Each time I come to work, he would always welcome me warmly with a lovely smile. I loved working there so much. My days working there was with great ease because of my nice boss.

The bad boss is one who is just that so-so boss, he considers his personal interests than that of his employees. He is not so nice and he is actually not so wicked. But all he considers is how he would satisfy himself and his comfort, thus demonstrating little or no concern for his employees, and most of the time expresses anger. The bad boss also talks too much; operating process is built basically on commands and controls. They make so much noise over little employees’ mistakes, waste excess energy on employees’ makeovers. I was somehow unfortunate to work under a bad boss during my days in one of the chain stores of Wal-Mart, she was so full of herself, and never too soft neither was she nice to be with to share one’s problems. I was always considering leaving every day I spent here. I spent only two months working there, and those months were like hell let loosed. My boss would always insist on resuming duty as early as possible and she was never ready to listen to any excuses. She wasn’t approachable; hence, it was so impossible to trust her for any reason. There was a time I was given a task to clear off some dishes off the display shelf, while I was working, a dish slipped off and got broken. I received words I’ve never heard all my life; she spanked me so badly and killed my morale to continue the tasks and many others that day. However, I lost interest in the job and stopped performing my duties as required. Though she had some better days, but I never had good and better experience with her for the few months I spent working there. In a short while, I considered leaving to get a better place.

The horrible boss is the one I call the ugly boss. His mode of control is disrespectful; he doesn’t know how to take time to motivate people, hence a controlling delegator. He focuses on assigning tasks to his employees without even explaining the reasons why he should. He is indecisive, stubborn, visionless, and arrogant. He is one who shifts blames on his employees when there is a mistake on his part but quite associated to an employee. Sometimes, when I remember my days at Super K Mart, I just wished I had the power to fire my immediate boss. He wasn’t a mentor, neither was he a leader. He often makes life uncomfortable for me and many other co-workers. The worst part of him was that, he gives favoritism to other employees that he makes friend with. I went to meet him to get a day off, as soon as I told him, he just said it wouldn’t be possible because we had an agreement when I submitted my schedules that I wouldn’t request for absent days. I pleaded I needed to attend to some unexpected functions. He insisted strongly. I felt so bad to miss the program.

Another very annoying day was when the CEO was around for a board meeting, we had to remit all balances and my immediate boss was with us and he actually performed a larger part of the calculations. He went for the board meeting to deliver the report, it was observed to contain some errors. The CEO was so infuriated at those little errors because he had told my boss to prepare the report error free a week before then. He immediately shifted the blames to his employees. I like simple economics calculations, however, I did take part in the calculations but my boss took his time to scrutinize the analysis and he thought it was perfect. He mentioned my name at the meeting that I would have been the one who made the error in some particular aspect in the report. I was sad the CEO felt bad about us but that day passed peacefully. My boss was a thorn in my flesh and that made my experience at Super K Mart horrible.

I have basically understood different types of bosses at the growing stage of my life and I have thought to myself better measures to take to manage these kinds of people in order to retain the better paid job without considering the bad and ugly bosses. We live in a world where everyone can’t be a perfect being. Definitely, I must learn to accommodate different people with their individual differences. The good boss is always impressive to work with and makes the work place a memorable one, the bad boss makes life unbearable and the ugly boss makes work place like a den to live in and uncomfortably. However, it is my duties and responsibility to manage the angels and monsters with a perfect task to retain my dignity, integrity and personality.