To determine the properties of tensile test, Aluminum alloy, A6061 is used. In the figure you can see the Baldwin, the universal testing machine, through which tensile test is performed. Tensile test has the four properties, the YS that is the yield test, MOE, it is the modules of elasticity, UTS, it is the ultimate strength of tensile and RS, the rupture stress. These all four categories are created or determined throughout or during the lab period, by using the plot.

Figure (1) the universal testing machine “Baldwin” is shown in the image.

The whole experiment of Aluminum alloy A6061 is showed in the graph. In the following plot, the values of MOE, YS, UTS are written, which are defined as graphically and numerically. 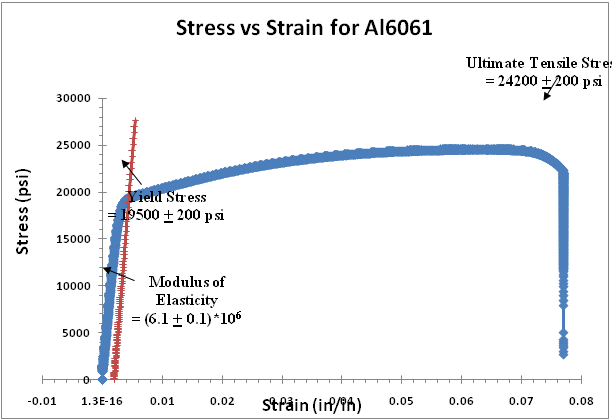 The values that are given theoretically have the big difference between the text book values and the values that have obtained by the experiment. In the textbook the value given is 10 x 10^6, but through the experiment the value get is (6.1 + 0.1) x 106. The YS also have the different value, in the text book it 47,000 psi, however, the value get is 19500 + 200 psi. The values are slightly different from the value of the book. There is also difference in the UTS; the textbook value is 45,500 psi while the value determined is 24200 + 200 psi.