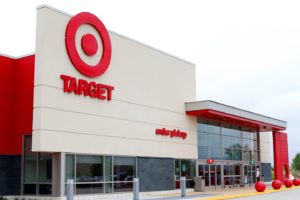 Target Corporation, popularly known as Target, is an American retailing company whose headquarters are in Minneapolis, Minnesota. It was established in 1962 as Dayton Dry Goods Company (later converted to Dayton Hudson Corporation), with the first Target discount store opening the same year. Target experienced phenomenal growth and ultimately became Dayton Hudson Corporation’s largest division, which consequently led the renaming of the company as Target Corporation in 1990 (Pederson, 2004). In a ranking for largest discount retailers, Target Corporation was ranked the second largest in the entire United States in 2009 and number 30 in 2010 on the Fortune 500 ranking (Burritt, 2009). The corporation has also made it as part of the Standard & Poor’s 500 index (Pederson, 2004). This corporation deals in general merchandise stores including apparel, fashion clothing, as well as foodstuffs home furnishings and décor, hardlines (toys, music, electronics, sporting goods, books), food and pet supplies, and home goods.

One of the key strengths pertaining to the apparel products offered by the company is the recognized status of the company. Target Corporation comes as an extremely strong brand with 97% of the entire population in the United States recognizing the color red and bull’s eye logo (Community Grand Forks, 2007). The brand has over the years grown into an icon for everything that can be considered cool, stylish and hip in the retail world. On the same note, the brand has a close relationship with young consumers thanks to its adverts, as well as the fact that it has partnered with recognized designers including Michael Graves, Liz Lange, Mosssimo and Amy Coe among others. In addition, the company is made up of over 1700 stores in the country, situated in almost all states (USSEC, 2011). This may have been as a result of its advertising campaigns, as well as distinctive marketing tactics that have made it the epitome of everything that is considered cool. The company has ridden well on its capacity to make accurate predictions on the customers’ demands, which they satisfy with creative and high-quality products thereby cementing the loyalty of the customers in the company.

The key weakness of Target Corporation revolves around the fact that its current locations are only in the U.S. with only Vermont, Hawaii and Alaska states lacking a Target discount store as at 2011 (USSEC, 2011). This underlines the fact that the corporation has no presence in the international market. The company has also suffered numerous lawsuits in the recent times that have disengaged it from business focus to the lawsuits. On the same note, researchers have noted that the corporation tends to overemphasize on quality, which drives its costs extremely high unlike those of its close competitor Wal-Mart. (See also Walmart SWOT Analysis.)

Nevertheless, the corporation has an immense opportunity for expanding in the international markets. It can have an immense share of the expanding markets in countries such as India and China. This would not only increase its competitiveness against Wal-Mart but also lower its vulnerability to slowdown of the United States economy. On the same note, t could examine ways of improving and strengthening its brand without increasing the cost of its products.

Target Corporation has its biggest threat as the competition in the national and local markets both from national and international companies. A large number of its competitors have incredible presence in the local and international markets, thereby offering cutthroat competition in its markets. On the same note, a large number of these companies have undergone mergers thereby increasing their sizes and customer bases as is the case for Sears and K-Mart retail companies.  In addition, the company has been facing an immense threat from the slowdown in the United States’ economy, which would undoubtedly affect the revenue growth of the corporation, which has already been affected by the numerous lawsuits. The crisis in the housing market, coupled with the increasing cost of foods and utility has left consumers with little disposable income. This threatens the company’s competitiveness in times of crises as it does not have the capacity to fall back on its international or foreign markets.

Needless to say, there are varied aspects on which the corporation should focus on in order to enhance its sustainability, profitability and competitiveness in the short-term and long-term. First, it should increase its business operations and presence in other parts of the globe especially the developing international markets such as India and China. The fact that the business operations of Target Corporation are primarily concentrated in the United States puts the company at an immense risk in cases of slowdown of the economy, not to mention the fact that it limits it capacity to grow. In essence, it should expand its business perspectives, as well as come up with an expanded sense f carrying out its operations. In this case, it should consider international markets such as India, Japan and China among other markets that exhibit incredible potential for profitability, expansion and sustainability in the long-term. These markets have potential customers running into millions, in which case they have incredible opportunities for growth.

In addition, it is imperative that the corporation lessens its obsession with quality. Of course, quality plays an immense role in strengthening a brand and sustaining customer loyalty on a product. However, being overly obsessed with the same would be likely to jeopardize its capabilities in the long-term especially considering that it results in the increased cost of its products compared to the goods offered by its competitors especially Wal-Mart. In essence, it is imperative that the corporation comes up with strategies that will sustain its high quality without compromising on the cost of its products. This will enhance its competitiveness in the local and international markets.

In addition, the numerous lawsuits that Target Corporation has been facing in the recent times have had an immensely negative impact on its image. Even in instances where it may win the lawsuits, the reputation of the corporation remains at stake. This is especially considering that the lawsuits involve touchy and controversial topics such as racial discrimination, not to mention the suits by the blind community, as well as the boycotts by the gay and lesbian community (National Federation of Blind, 2008). These do not auger well with the company’s profitability and sustainability in the short-term and long-term especially considering its impact on the corporation’s image and reputation. In essence, it is imperative that the company comes up with effective corporate social responsibility strategies that will reassure the general public (and customer base) that the company cares about their welfare, the environment, as well as the health of the economy. This will go a long way in the restoration of the public trust in the company, which will enhance its position.