A blue colored fruity soda (described as a “Berry Cola Fusion”). Given a huge marketing push, often considered a major flop on the order of New Coke. No longer produced. In Iceland, Pepsi Blue was sold for a brief period of time during the winter of 2003/2004, and in India during the 2003 Cricket World Cup. It was sold for a longer period in Austria, and is still available in some parts of Mexico. It is also still available in Indonesia. It was also sold in the Philippines for a limited time only, usually it appears during Christmas season. Likewise, it was sold for a limited time in Australia, Bulgaria, Poland, Finland and Romania. 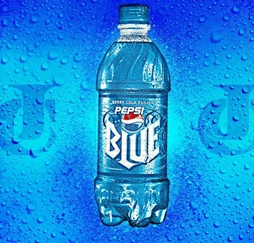 Pepsi Blue was a berry-flavored soft drink produced by PepsiCo.

Pepsi Blue was launched in mid-2002 and discontinued in Canada and the United States in 2004, although it remains available in Indonesia and in the Philippines. Its flavor was the result of taste-testing over 100 flavors over a 9-month period. It was designed to compete with Vanilla Coke, which was produced by The Coca-Cola Company of Atlanta, Georgia. The flavor of Pepsi Blue was described by Pepsi only as “berry” and described by drinkers as like blueberries or raspberries, or similar to cotton candy with a berry-like after taste and much more sugary and syrupy than regular cola. It was tinted using Blue a highly controversial coloring agent banned in numerous countries at the time. The move to make a brightly colored version of the flagship Pepsi brand was spurred by 2001’s introduction of Mountain Dew Code Red, which had bumped PepsiCo’s Mountain Dew division sales up 6% 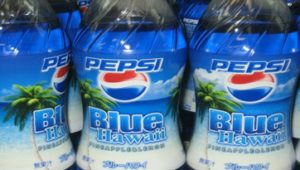 Although heavily promoted by PepsiCo, including advertisements by the pop singer Britney Spears and the bands Sev and Papa Roach, as well as in the movies The Italian Job and Garfield: The Movie, it is widely seen as a commercial flop as sales remained low. Even with the failure of Pepsi Blue, PepsiCo still managed to post double-digit growth.

Pepsi Blue was promoted after New York Mets games during the summer of 2002, where the color blue was one of the symbolic colors of the ball club. Other promotions included handing out free bottles from a Pepsi Blue themed VW New Beetle at popular shopping centers around the country. Jolt Cola makes a similar beverage called Jolt Blue CX2; a blue raspberry soda in a battery shaped metal can with a flavor often described as like that of cotton candy. Pepsi Blue was also endorsed by Adam Vinatieri, the then New England Patriots kicker.

In Manila, Philippines, Pepsi Blue was sold for a limited time in late 2002 to commemorate the championship of the Ateneo Blue Eagles in the UAAP. In 2011, Pepsi released Pepsi Blue in Metro Manila, Philippines as Pepsi Pinas. After the Pepsi Pinas was successful, it became a permanent product and renamed as Pepsi Blue. It is rare in bottles and cans but common as a fountain drink at Philippine 7-Eleven outlets. In India, Pepsi Blue was sold during the 2003 Cricket World Cup as a gesture of support to the Indian cricket team, the cricketers of which wear blue jerseys.