Meaning, Concept and Features of Globalisation

The first application of the term globalisation was on world economy with Columbus and da Gama’s so-called circumnavigation of the world in the fifteenth century. Globalization emerged and evolved as man began to see the world as a large product manufacturing plant. Products of any kind and products that threatened world extinction started to dominate the quest for progress and development of man. That is materialism at its worst, or at its best.

Recent authors and commentators assert that globalisation began at the end of the Cold War which was in the period 1989-1991. The Cold War was characterised by the two-block system, the East and the West, or the opposition between the United States and the Soviet Union, with their supporter countries. And when this was dissolved, with the collapse of the Berlin Wall known as the Iron Curtain, the world seemed dominated with a one-bloc system with a single marketplace. (Eriksen 2007, p. 4) 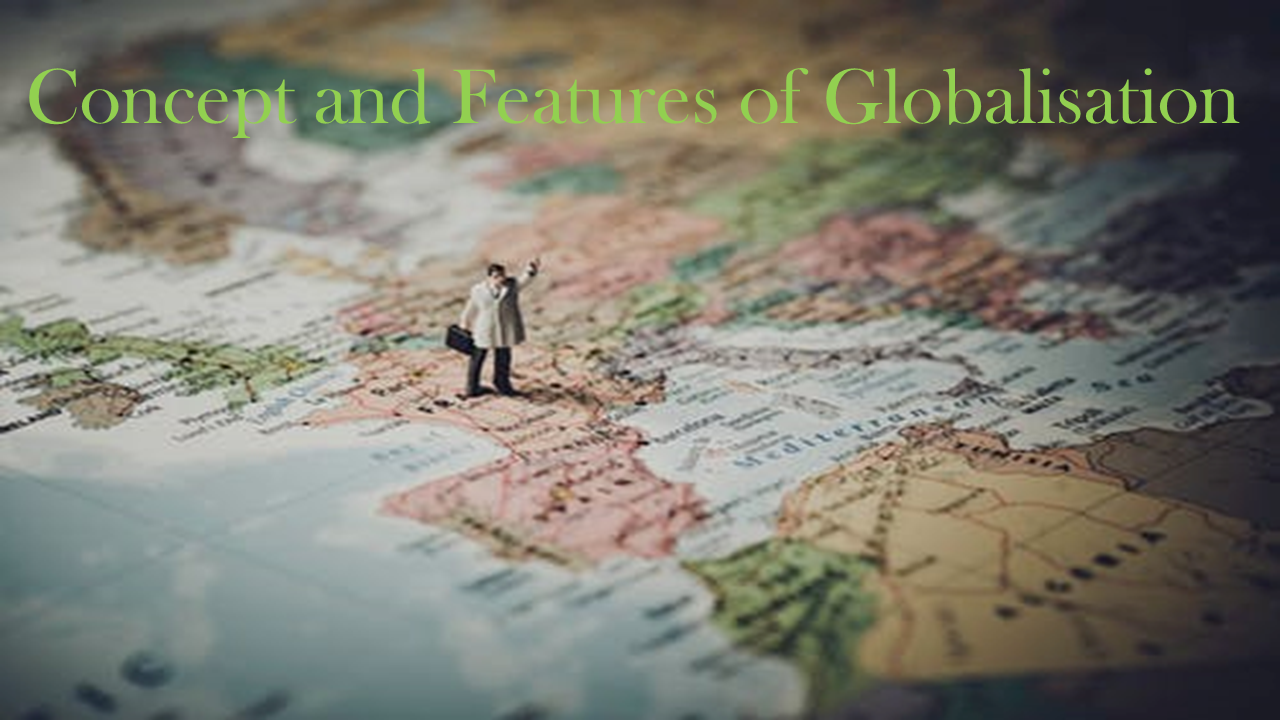 Meaning and Concept of Globalization

Globalisation refers to economic consolidation through liberalisation of policies leading to an open economy (Van Der Bly 2005, p. 875). An important characteristic is the interconnectedness of people and openness of nation states. This is enhanced by technology and the Internet, with emails and websites becoming so popular, and everyone can connect and communicate with anyone in any part of the world for as long as there is a computer and an Internet connection. Mobile technology also has become popular and impacted on business and human transactions. Technology and the Internet are referred to as ‘a world of signs’, ‘the age of digitisation’, or the global village where nation states have fewer roles (Bairoch 2000).

Some other important aspects include internationalisation, protectionism, liberalisation, and improved competitiveness in world commerce. Mooney and Evans (2007, p. 11) indicated that the beginning of globalisation was the ‘rise of capitalism’. But the question of chronology of globalisation has never been agreed upon by authors.

Our primary aim here is to define first what globalisation is and to have a full understanding of its meanings, concept and features. Globalisation encompasses many subjects or disciplines. There are scholars in various fields that can be called globalisation scholars, such as those pursuing interesting studies in culture, sociology, economics, international studies, politics, language and the arts, and much more. Globalization is covered in many subjects and it is one of the much researched fields in man’s pursuit for knowledge (Ampuja 2012, p. 17). This is one of the main features of globalisation – its being cross-disciplinary, which allows it to borrow terms and concepts from those discipline’s own lexicon. (Mooney & Evans 2007, p. ix)

Scholte (2005) asserts that globalisation is closely linked to the concept of internalisation, which means the word ‘global’ is a word that describes cross-border interactions or transactions between nation states, and globalisation pertains to an increasing international relations and interdependence of countries. Another important word that we can add to the meaning is liberalisation. This word pertains to a process where there are no restrictions or hindrances during economic transactions between countries. Economists also call it ‘international economic integration’. Liberalisation refers to removal of trade regulations and barriers, foreign-exchange laws and other related laws, and even visa restrictions (Sander cited in Scholte 2005, p. 31).

Scholte (2005) adds the word ‘universalisation’ to the concept of globalisation. He theorised that when Oliver Reiser and Blodwen Davies first introduce the word ‘globalize’ in the 1940s, they meant it was about ‘universalising’ or a unity of cultures, or the global village. Thus, Scholte defined globalisation as the way of distributing objects or products and experiences or services to people in many parts of the world.

Globalisation can be applied to production of all kinds of products and services, including cars, fashion accessories, beverages, restaurants, agricultural products, and services. With the introduction of high technology, jets travelling faster than the speed of sound, and various ways of multimodal transportation (containerisation, etc.), products can be delivered at a speed that cannot be imagined. (Scholte 2005, p. 32)

Another definition added by Scholte is the concept of westernisation, referring to American products and services (Spybey; Taylor as cited in Scholte, 2005, p. 33). Social structures in the modern world are distributed to almost all parts of the world. These structures are linked to capitalism or industrialism, and other similar words and concepts. We hear that McDonald’s is now in China (some commentators call it the “hamburgerisation” of the world) and in India (hamburgers without the beef). CNN can be heard even in the remotest part of Asia or Africa. Globalisation is regarded the quickest and simplest way of colonisation without the use of arms and troops (Khor; Biel; Ling as cited in Scholte, 2005, p. 41).

A theory expounded by Held and associates (as cited in Raab et al. 2008, p. 597) states that globalisation involves changes in the spatial organisation of business and social transactions which create global flows and network of action and interactions with the use of authority and power.

In the new global setting, states are influenced by international and regional groupings. Internal and external sovereignty of the state has been reduced. Nation states consult and ask financial aid and help in whatever form from these regional groupings; for example in Europe we have the European Union (EU) and in Asia they have the Association of Southeast Asian Nations (ASEAN). The World Trade Organization (WTO) has influenced nation states’ regulations and trade barriers. Poorer nations, or countries that belong to what they call the Third World, are under the dictates of the International Monetary Fund (IMF) and the World Bank (Randeria 2007, p. 1). Big businesses are also merging; there is the growth of mergers and acquisitions and joint ventures of giant firms that has led to an increase in the multinational companies’ leadership in the international business arena.

Having a standard product means having the same product marketed throughout the world (Herbig, 1998, p. 47). This has many benefits for business but also disadvantages for nation states. A major advantage is that products are cheaper but a primary disadvantage is that consumers have to accept the product the way it is even if it was manufactured in China. Quality comes secondary.

Another concept of standardisation as an outcome of globalisation is the institutionalising of standards which is a means of ‘soft regulation’ by nation states and the formation of International Organization of Standardization which is seen as a practice of ‘government at a distance’ (Higgins & Hallström 2007, p. 685).

Companies or businesses applying measures to reduce costs have resorted to outsourcing. By means of outsourcing, a firm acquires the services of another firm to perform some functions for the organisation. Companies outsource manufacturing and other functions like payroll system and human resource management. Outsourcing is made easy by technology. Most businesses and organisations in the world outsource products manufactured in China. There is however one disadvantage in outsourcing and that is manpower is reduced when the company outsources most of its functions, for example manufacturing. In the United States, many companies did outsourcing to reduce their operational costs. What happened was that some companies closed shop because of competition from cheap made-in-China products. With the present economic downturn in the United States and all throughout the world, unemployment is aggravated by this process of outsourcing, although this refers only to buyer countries. This is therefore no answer to mass layoff of employees of many businesses. (Eltschinger 2007)

Contrary to the proponents’ views of IMF and World Bank policies that the state has no capability anymore to impose its authority because of globalisation, Randeria (2007, p. 2) argues that it is imperative upon the state to formulate and implement the laws and policies governing neoliberal issues that are applied to the national and local programs. Further, the state promotes and benefits from globalisation, and proponents expect economic growth and decrease injustice and poverty amongst countries in the world. This will reduce differences and eliminate xenophobia across nations.

With intense globalisation, multinational corporations have multiplied. This is the result of policies favouring removal of tariffs and other trade barriers (Buzzell as cited in Vrontis et al. 2009). Interdependence of countries has significantly grown. Organisations have become multi-cultured, with managers and employees coming from different nationalities. Problems and complications have emerged, like the marketing strategies that managers have to implement in a subsidiary with different culture and tradition. Products are also affected because there are people who don’t accept products without international appeal. (Briscoe & Schuler 2004, p. 12)

There are those who oppose globalisation for ideological reasons, stating that globalisation is a tool of capitalism, a political vehicle of American imperialism and multinational companies. They also argue that the socioeconomic costs are too high and the benefits are not distributed equally (Giusta et al. 2006, p. xiii).

Sceptics come from various sectors. Some commentators regard globalisation as an outcome of plans implemented by capitalist forces pursuing selfish motives. Communists view it as formulated by modern media, which is ambiguous and can lead to the downfall of poorer countries (Rozanova 2003, p. 51). Sceptics also say that the concept of the global economy is only a myth, i.e. it was invented in the company’s home country (Scholte 2005, p. 32).

How do Researchers Measure the Impact of Globalisation?

Effects of globalisation, and how it can be measured, are to be sourced from the economic literature. Economic globalisation utilises macroeconomic indicators which is about financial facts and figures, international trade of products and capital from foreign investors (Sutcliffe & Glyn as cited in Raab et al. 2008, p. 597). From these measures, Raab and associates provided a new GlobalIndex which provided measurement for globalisation, including non-economic dimensions such as what they called ‘sociotechnological interconnectedness’ which can be considered a central aspect of globalisation. Added to this part of the measurement is the cultural context which includes measurement of the ways of consumption, and these indices can be incorporated into the economic indicators. Trade barriers and indicators should also be considered in the measurement process.

From the information collected on globalisation, including the advantages and disadvantages, we can state here that globalisation is a significant contribution to the world economy and an important part of contemporary world history. But the consequences have to be carefully weighed down and qualified. Scholte asserts that globalisation is not the most important trend in the world this present time. (2005) But it provides a link with other major social interactions, like the changes in the processes of production, management, and other forms of knowledge and disciplines.

Reasons Why Did the American Revolution Took Place Summary