Learning to Lead at Toyota

Learning to Lead at Toyota – Summary:

The purpose of this article is to explain about the company Toyota, that what have makes the Toyota a successful 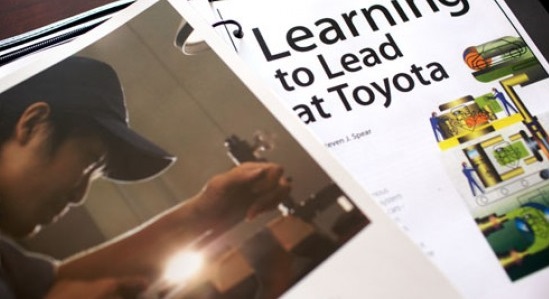 company in the world, the company has focused on its objectives and make the strategies so the objectives could be attained. The company is successful because the customers and employees are satisfied, many of the companies across the world have learned and studied about the Toyota’s management principle (TPS), in order to gain the advantages like Toyota, however, the companies failed to approach the targets but few of them become able to match the performance like Toyota. In the article, the hard work and management decisions of the Toyota are being considered that company success is possible as they have made and followed the tools and tactics. The company has best managers as they are focused on learning and continuous improving; they have learned from the experiences and did continuous experiments for the success.

The company is focused on the production system, Toyota is considered best as it has maintained the quality, productivity reliability, sales, cost or price reduction, market share growth etc. Toyota has loyal customers and it has overtaken Ford. Toyota becomes able to manage or ensure the better work, as they have done improvement in the safety, efficiency, profitability etc. They have the best practices, they have full knowledge about their product; the product is designed to satisfy the customers, the operations are well managed by the employees and managers of the company. Toyota has understood the importance of the managers and their decisions, they have trained their managers, they recruit talented and young professionals, the Toyota employees are encouraged so their performance can be effective, the company is fully aware or have the necessary knowledge that how the company should be managed.

Toyota has great managers and generating the superb cars, the manager Bob Dallis’s focused on the labor productivity; that how it could be improved, in the process the focus was on the safety and productivity. It was being noticed that working in the team or group could give benefits to the company; the problems were observed and then evaluated. Dallis while working in the company has noticed that what are the problems and the causes of the failures effective steps were taken by him for the improvement of the product or services. The workers were given attention, as for the effectiveness the workload was reduced.

Experiments were frequently done because the importance of experiment was known, to improve the productivity managers have made and apply various problem-solving techniques. The statement “Manager should coach not fix” in the article has told about the efforts of the managers that they did for Toyota. Managers play a role of teachers, enablers, and coaches, they have trained the employees and did specific improvements at different levels. The managers have done struggles so the goals of the company can attain, various experiments were done by the managers and they have learned that how to deal with the actual production.