The Indian classical music is an art based on different concepts. The music is also referred to as Raga Sangeeth. It relies on two concepts known as Tala and Raga. The music originated from the Hindu scriptures which were considered as sacred. The Holy Scripture was known as Veda or Vedas. It was an improvised spiritual, traditional music. Veda is a traditional system of music that has developed gradually into the modern Indian music (Daniélou and Alain, 2007). The music is predominantly based on the rhythm an 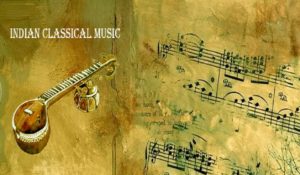 d melody. It is different from the European music such as jazz which relies on harmony, modulation, and counterpoint.

Raga refers to a tonal idiom that has been improvised into a melody. It is a modal structure that acquires its musical identity from a range of factors that are considered to be complex. These factors include the Indian tonal system, inflections, subtle nuances, ornamentations, and individual notes. The tonal system consists of 22 microtonal separations which are also known as Sruti. The ornamentations are usually associated with specific Ragas. Besides, the ornamentations emphasize on different notes known as Vadi Samavadi. The notes are based on specific Arohana and Avarohana movements which match the particular Ragas used. The Arohana and Avarohana are also referred to as ascending and descending movements respectively. Most Ragas are performed during specific times of the day such as in the morning, evening or night. However, there are those which are carried out during special occasions, particular seasons or festivals. Their rhythm and melodies of the Ragas played during various seasons or festivals are consistent with the philosophical and aesthetic ideas of the Indian people. Besides, it expresses one dominant mood usually known as Rasa. There are nine different Rasa(s) which are associated with the Indian classical music.  They represent the dominant mood of the society at that particular time such as anger, wonderment, and disgust among others.

Another important improvised Indian classical music is known as Tala. It is a conceptual rhythm of the music that relies on different beats played in cycles that range from 3 beat cycles to around 108 beat cycles. There are also complex improvisations beat cycles represented in fractions such as 111/2, 41/2, and 61/2 among others. For the Indian classical music to be accomplished, it must demonstrate a complete facility and mastery of both Tala and Raga. The mastery and facility of both types of classical music will enable the performer to have total freedom to improvise the different complex constraints of both Tala and Raga.

There are various instruments which are used to perform the Indian classical music. The tools describe the typical performance of the music. Such instruments include Jhala, Alap, and Jor. Jhala is used in unison with other solo instruments such as Sarod and Sitar among others. The Alap is usually slow and spiritual. The Sitar is a stringed musical instrument which is used in several parts of India. It is a popular instrument made up 20 strings. The seven strings are considered to be the major playing strings while the rest are known as the sympathetic strings (Prajnanananda, 1980). They respond to the sympathy of the main playing strings to produce the rhythm and melody of the music. The Tabla is a drum which is usually tuned to the tone of the performer. It generates a particular pitch that matches the tonic note of the musician or the artist. The Bayan refers to a bass drum which is used to produces a variety of sounds that forms a rhythm that is tuned to the tonic note of the performer.

The Indian classical music is liked by many. However, the performers have not been able to develop and shape their music to meet the musical edifice. Besides, they have failed to express the excitement required of the Raga music despite several pieces of training.