Religious belief and practices are depending on human nature and culture, origin of religion help men to understand the world or the universe. The man react in his life according to the culture he/she following or according to the religion, he believes on. However, the views about religion or nature are incorrect sometimes. Recent finding have said that acquiring the religious concepts is one own choice. It is also the mental stability or psychology of any person that how he behave in any situation believing on his religion.

There are many theories about human nature in non-western culture, they define human being as a different 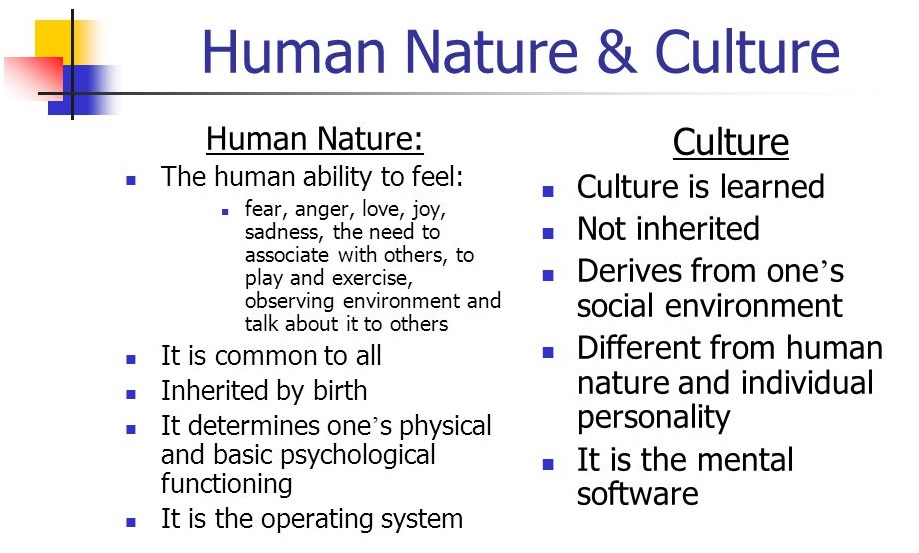 compared to other living things. There are different aspects and issues of people who had better understand their place in nature, most of them have their own point of view, but they see things from naturalistic or humanistic view, they believe on human destiny other than anything (DAILY MAIL REPORTER, 2011). There is variety of religions like Hinduism, Buddhism, and Brahman etc. Every religion has its own sense about human nature. Both Buddhism and Hinduism one aim is realized after death and human nature is related to the divine nature. However, religion like Islam and Judaism has different concepts about death and human nature. Islam and Judaism say, God is the creator of World, human nature for them is independence and they want to live life accordingly as God’s will. According to Islam, sin is not rooted in human nature, human force his/her self to do sin, and they believe all humans are understood to born as a Muslim. In the case of Christianity, human nature is dominant tradition The bible says about human nature that human beings as created as in the image of God, there were different interpretations in the history about this, that whoever is in the image of God is given a task to take care of God creation. Every human being have his/her own sense of religion and nature. Christianity, also say all human are unique than other spices on earth. Human are placed between God and angels and have high ranks than other creations.

Christianity teaches the world that love, intelligence and power are in human nature. God made the creation for some purpose, everything in the world is valuable and creature should enjoy the perfect love and justice in life, Human purpose is to serve God and human being are God’s glorious plan for creation.

For every religion, there is different meaning of human nature that for what purpose they are created? Moreover, what is the purpose of their existence? Mostly religions talk about love, respect and care when their talks about human nature. Human are in the world to fulfill some goal, God knows the purpose of the creation. For the Christians, humans are to accomplish one divine plan of God and God have given them favor and love, human nature is being misused sometimes, people may be selfish and may perform sins sometimes (Hallowell, 2011).

What is Business Intelligence