Organization operating in today’s rapidly changing business environment requires an executive and management staff capable of inspiring and managing its human resources to achieve optimal performance from its employees. In order for a company to achieve this goal it must adapt a leadership style that is flexible and adaptive to changes in the environment. A leadership theory that can allow companies to achieve their long term goals is Hersey and Blanchard’s situational leadership model. The purpose of this review is to discuss and analyze the leadership model of Hersey and Blanchard.

Situational contingency theories have are organizational development application that are effective at applying leadership concepts that are adaptive to the situation at hand. There are three major situation contingency models. The three models are Fielder’s leadership model, House’s path – goal theory of leadership, and Hersey and Blanchard’s situational leadership model. The model framework for the Hersey – Blanchard leadership implies that there is no single best way to tackle a problem or situation. According to Hersey and Blanchard situational leadership requires adjusting the leader’s emphasis on task behaviors such as giving guidance and direction, relationship behaviors, and providing socio-emotional support (Schermerhorn, J., Hunt, J., Osborn, R., 2003). The leadership style application has become very popular in the 21st century due to the fact that business changes are occurring faster than ever and manager have to be adapt the business strategy of the company and the vision of its human resources to meet the market demands and requirements.

The model of Blanchard and Hersey can be defined by how much guidance and encouragement the leader provides to his followers (12manage, 2009). Appendix A illustrates a matrix that explains the functionality of the model. The four factors illustrated in each quadrant of the matrix are S1, S2, S3, S4. The S1 variable which is located in the bottom left quadrant represents the telling style. In this style the manager provides a high task low relationship work output. This means that manager provides specific instructions and closely supervises the performance of the subordinate. This style is most effective when the leader is dealing with employees that are unable to take responsibility for themselves. An example of an employee that needs his supervisor to apply a telling style is a new employee in a firm. This person needs more attention and close supervision until the individual feels comfortable, learns the basic, and blends in into the corporate culture of the enterprise.

The second quadrant (S2) represents the selling style. In this form, the director performs a high-level mission with his / her subordinate. When this style is utilized the manager has an open communication with the employee in which he explains and discusses the decisions and the leader provides an opportunity to the worker to openly discuss the issues in order to receive valuable feedback from the staff. The method involves combining a directive approach with explanation and reinforcement in order to maintain enthusiasm among the staff of workers (Schermerhorn, et. al. 2003).

The third quadrant (S3) located in the left upper side of the matrix represents the participating style. The participating style involves a high relationship low task behavioral pattern. The leader has to put forward an extra effort in order to attend the emotional needs of a group of employees that lack motivation. The subordinates or followers under this leadership style application actively participate in the decision making process of the firm. There is open communication and ideas are shared among the staff. In such a setting the synergy of the group is high which allows for human interaction and communication to run smoothly. An example of type of business in which a participative style would an effective managerial tool is in a consulting firm.

The fourth variable (S4) of the matrix represents the delegating leadership style. This specific style provides little in terms of direction and support for the task and at hand; it allows able and willing followers to take responsibility for the activities that need to be done within the organization (Schermerhorn, et. al.,  2003). The manager ends up turning over the responsibility to the subordinates for the decisions of the daily activities associated with their job task. This form of leadership applies the business concept knows as empowering employees. Empowerment can be described as the practice of sharing information, incentives and power with employees to take initiative and take decisions to solve problems and improve service and quality (Businessdictionary, 2009). This leadership style can be effective in business projects since it these types of work setting having a streamlined decision making system accelerates the implementation process and reduces the duration for completion, a variable that lower the cost of the project and increase the profitability of the company.

The follower’s of the leader must undergo a development process. It must be noted also that the leader has to be able to utilize all four styles which changes depending on the situation.

The four development levels have the codes D1, D2, D3, D4. D4 represents the most experience and competent workers, while D1 refers the rookies who are starting out or any other employee that requires special attention for whatever reason. The management template of Blanchard and Hersey has both benefits and disadvantages. The following table contrasts the benefits and disadvantages of the leadership system;

Since the beginning of the current economic era known as the broadband age which commence at the turn of the century the business world has become more complex than ever because of the vast amounts of information that have to be considered in the decision making process. It is important for the leaders of companies to be flexible people that are able to adapt to the changes in the environment. The leadership model that provides manager with the tools needed to lead an organization into the future is Blanchard and Hersey situational leadership model. 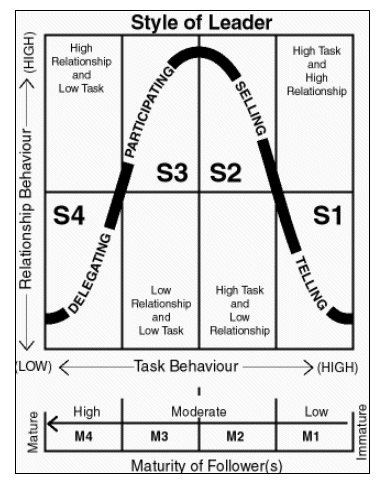