Globalization refers to the worldwide economical, political and cultural exchange of ideas among the states in the modern world. It is used to describe how world is becoming economically and politically one. The economic aspects of globalization include trade, investment and migration across the countries. Globalization believes that human being should have greater access to vast number of goods ranging from cheap labor in third world countries to bigger overseas investments.

The two decades of 180s and 1990s the liberalization swept the world economy. The 1980s democratization changed the landscape of the business and trade and industry, connecting every country in the world through globalization. The decentralization of economies and goods allowed trade, commerce and services to be transferred to other countries, regardless of distance. Globalization is not only confined to economic sectors, but it has also given rise to the adaptation of   social, political and administrative aspects of other countries (Maharjan, 2006). For example the integration of EU made the region competitive by following the common EU foreign policy. EU remains an example where balance is maintained by social solidarity, allowing freedom of movement and establishment across different states (Steinmeier, 2006). 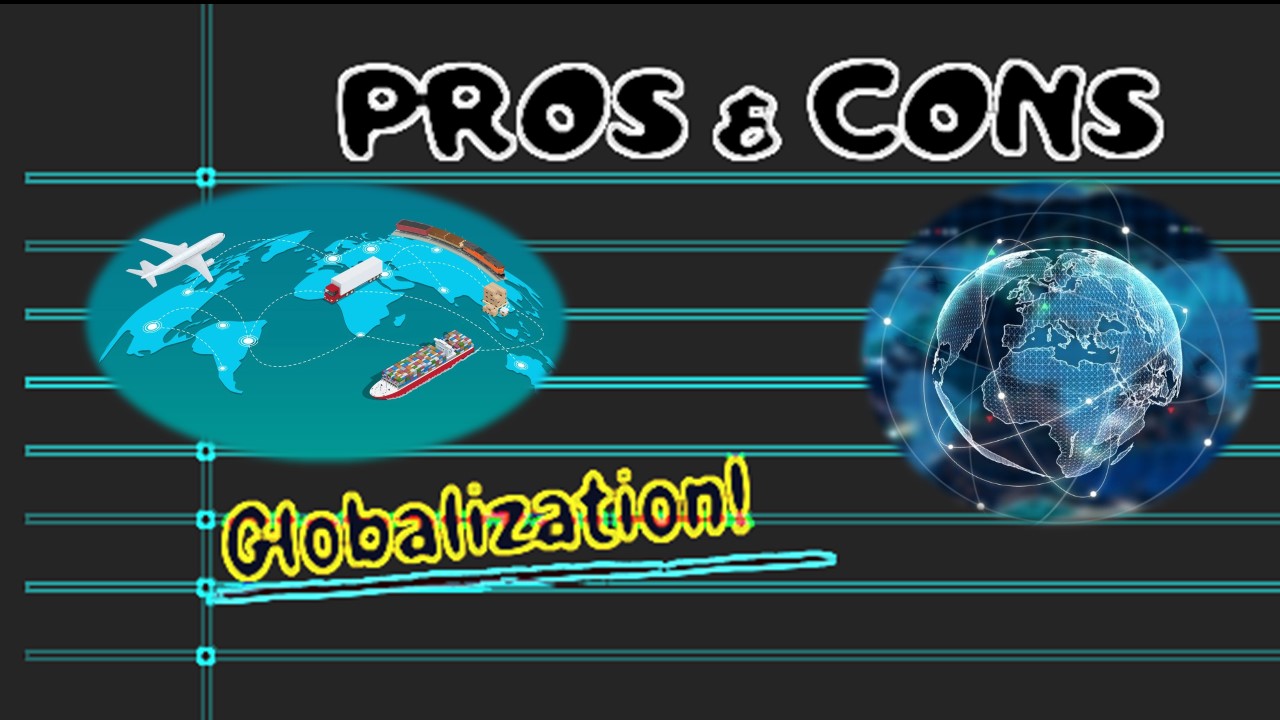 The anti-globlist view globalization as a negative phenomenon that has is making rich more richer and poor more poorer. They argue that globalization has increased poverty and diluted responsibility to the capital owners, slashed down the jobs and increased threats to resources in poor countries with no solution in place. While others mention that positive impact of globalization has removed barriers across the states, accelerating the growth of reforms and allowed greater information access to all parts of the world. (Kennedy, 2001). Globalization has pros and cons and has different interpretations in different continents, which will be discussed further in this essay.

Pros or Benefits of Globalization

The arrival of global market has allowed the aspiration of big players to expand their niche and derive maximum profit in the global market made possible through geo-economic expansion. Globalization guarantees this sustainable competitiveness through a steady leadership of technological networks, generating added value and production facilities with unlimited human capability. It contributes more to the global development producing greater scientific and technological resources. Even the countries that do not have such vast resources still play essential role in over all global development (Nikolayev, 2004). One of the most important roles of globalization is its economic role in international trade and economy.

According to Visto (2002) globalization is competition and reorganization, attracting countries that were in need of investment and such investment improved their economic condition. One such example is Mauritius, where per head income has increased from $500 to 1600 due to foreign investment. The foreign direct investment involves a long reflects a lasting interest in the host country. It implies that the investors have enormous control in another country’s economy due to its own interest, which ultimately leads to economic development. Thus any increase in FDI flow is directly associated with increase in GDP. FDI is undertaken by large and technologically advanced firm, which accelerate the speed of economic pace on one sided and also helps in transfer of technology in the host country with heavy return for the firms and provides more jobs in the countries where jobs are scarce.

For example when Toyota setup car plants in countries outside Japan, it requires higher level of standard to maintain the quality of it products, which means training the local workers. Thus if Toyota gets the competitive advantage, the host countries gets the skills and jobs. The recent joint ventures of China with Japanese companies are also such move by the Chinese entrepreneurs to get skill directly by working with Japanese. A few successful examples are the Asian Tigers; Singapore, Korea and Taiwan which have gained from such experince. The economies of these countries prospered through export led strategies with the use of cheap labour becoming skillful and creative. Korean Samsung, Kia and Hyundai and Singapore’s Creative are few examples of successful MNCs  that were born due to transfer of technology from foreign firms (Korth, 2005).

Similar policy has been adopted by China, which has attracted huge amount of FDI at the cost of cheap labour. While the Asean economies such as Malaysia, Thailand, Indonesia and the Philippines are moving towards the status of new industrlized countries and following the path of Singapore and Korea (Urakami, 2006).

Globalization has allowed even the fishing industry to grow beyond its home market and has given it access to overseas market with increased income in fisheries and intra regional trade. It has resulted in increased demand for fish products helping in increasing the GDP and foreign currency earnings for the developing countries. The fishery industry has also become more organized and a production has become more systematic leading to increase in wealth distribution in poor countries (UN Atlas of Ocean, 2006).

Globolisation helps in creating new ideas and fashion through media at a very swift speed and helps in developing a global culture. For example consumer all over the world can have access to similar products or same information, regardless of place and location. The other aspects of globalization include revolution in information technology and transportation, which has given rise to the concept of global village, where information travels across the globe at lightening speed. For example email, chat and cheap telephone calls have allowed human being in 21st century to connect with other people across the continents easily. Cheaper transportation and low fare have also created an environment, where going overseas is no longer an expensive deal, Now more people can go overseas on cheaper airfare which was unthinkable a few decades ago. This phenomenon has given rise to cultural globloization where people associate themselves through world culture becoming part of a global village. The formation of global village has created greater possibilities of increased understanding and friendship across the world between the citizens of the world in a global civilization (Kennedy, 2001).


Despite all the benefits of globalization a large number of developing countries have not made much progress as anticipated. For example other than few Asian countries majority of African countries have made little progress or in some cases have even lost the track becoming poorer. In Asia other than China and India, such as Maldives, Philippines, Indonesia, Burma, and Nepal and many other countries are becoming much poorer than they were which shows that the gap between the rich and poor countries is increasing as shown in the figure below.

Critics of the economic aspects mention that globolisation is an expensive social process. The increased demand of skilled and unskilled labour has negative effects on the world, as it is increasing the nature of capitalism booming inequality and poverty across the globe. Even the development of countries will continue forever. For example China has completive advantage of cheap labour, but as the skill of workers increase, wages will also rise and the capitalist will move to another destination in search of cheaper destination. Thus it is not certain that in the next ten year, the developing countries like China will continue its economic growth (Nikolayev, 2004).

There are other argue who argue that globalization has created credit-based economics, which creates unsustainable growth and debt crises. The global finance in developing countries is not really stable to support the   elaborate structures of globalization and the hope of prosperity is no thing more than a wishful thinking. Instead globalization for them is nothing more than global capitalism, where rich countries are freely exploiting poor countries on the basis of their wealth in the garb of globalization and free trade. The Southeast Asian crisis that started in Thailand spread in no time throughout the region created a huge calamity. Such kinds of crisis demonstrate the inherent weakness and risk in rapidly changing globalized economies that can arise anytime putting the whole region at risk. Even though IMF rescued these nations, but at certain conditions, crtics mention that such bailout put national sovereignty at risk (Korth, 2005).

Also Study: Advantages and Disadvantages of Globalization for Business

The greatest concern is that government in the developing countries often makes deals with foreign companies, which affect millions of people without giving any substitute to these people. Critics mentions that the dangers of globalized economy is that investors come into a particular country, present certain conditions and government often accept them without asking the people who will be affected, which is a violation of workers rights. It often happens under such deals when state companies are bought over by foreign companies, thousands of workers are laid off under so called structural adjustment program to cut the cost, while workers are pushed for longer hours and prohibited from labour unions. The whole purpose behind this way of working is exploitation of the foreign market to gain greater profit. Globalization is part of the changing world, but the way it is coming in developing countries, analysts say, lacks humanity (Taylor, 2002).

Globalization is leading to unheeded industrlization especially in the developing countries, which have become dumping ground for factory wastes and chemical. Such wastes are putting toll on environment accelerating the pollution and diseases in these countries. These factories also emit poisonous gases which increases the process of global warming, adding up to the depletion in forest and fisheries and water shortages which are adverse effects on environment  (Jordan, 2005).

It is often mentioned that the globalization will lead to homogenous culture and people around the world will copy Hollywood movies and popular American culture, which is far from true. Even though there are multinational companies overseas who thrive in different cultures and may have similar ways of working, yet they are still subordinate to the host culture.  The research has shown that treating world as place for similar thoughts and an idea is far from good; it will instead erode the world diversity (Globloization issues, 2006).

Like every other phenomenon globalization has its pros and cons, few of which have been discussed above, while much more can be explored. Today mankind is part of this process and little can be understood, when globalization is still in the process. Perhaps when mankind look back somewhere in the future at the globalization the true cost can be known by estimating gain and loss.

Pros and Cons of Globalization