This week’s readings and viewings are focused on the Gangsta Rap and its impact on the music and rap industry. 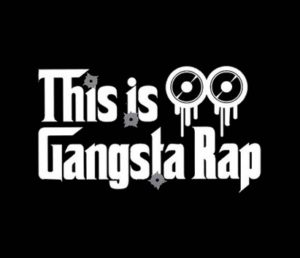 Additionally, it focuses on how much the blacks are more involved than the white, and more concentration on Dr. Tucker’s crusade against Gangsta rap in the music/recording industry, as seen in the article by Kierna Mayo (1994). Additionally, Gangsta rap is seen to be popular among the blacks and also have a huge role played in the development of the music industry, but still showcasing a level of misdemeanor (drugs and obscene views) in the industry. Gangsta rap remains popular within mainstream culture because of the reality the music portrays. We live in a community where reality tops everything, and gangsta rap depicts the relationship of the things that happen around us. Particularly, the showcase of lyrics that expresses the glory in drugs, misogyny, violence,  extravagant spending, display of obscenity with ladies with “big ass,” and more still make gangsta rap popular. In addition to this, the beats, groove, and excitement that fills the air when the music is played keep young people glued to the strength in the music. Now, the suburban hipsters will not stop buying the music, and more concentration is placed on it keeps it more important to the mainstream culture. This week’s examples of gangsta’ rap clearly connects to the Rodney King video, trial, and response to the verdict based on the content of the lyrics. As clearly seen, the artistes have a way of protecting themselves from police torture – through hiding, running away from them, and totally avoiding having any trauma with the cops. The examples show that since most of the gangsta rappers are black, they could be victimized haphazardly, and thus, have to be loyal to their deeds. Apparently, many of them have been stubbornly unyielding to the cops, and based on the fact they don’t wan to be victimized, they portray a level of radicality and still remain hold on to their fate.