Food Marketing to Children discusses that Children have been considered as one of the major final consumers in the market industry, and the market 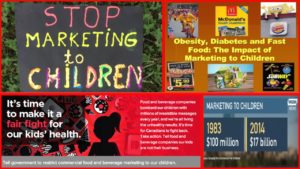 fully designed a means by which it could focus on their desires and interests in order to attract them. Over time, food marketing to kids has been identified playing a major role in the national obesity crisis towards the American children. According to the Institute of Medicine, television advertisements is influencing unhealthy food and beverage preferences, diets, and needs. (“Public health law center, 2015”) Most of the foods marketed to children are made of energy-dense fast foods, sugary breakfast cereals, sugars and salt, carbonated soft drinks, salty snacks, baked goods, which have more tendency to be of high fat and are poor in a nutrient. Generally, food marketing is the process of advertising consumable products throughout the world to encourage potential buyers. (“HBO, 2012”)

Different organizations follow several approaches to marketing food to children, these advertisements are not only done on the television, but on the radio, magazines, Internet, product placement in video games and movies, on product packages, in schools, on clothing, as toys, and almost anywhere a product image or logo can be displayed. Many of the techniques utilized follow the use of celebrities, spokes-characters, collectible, games, cartoons, contests, premiums, kids’ clubs, and many others. These effects have led to controversial issues that portray the ethical issues relating to food marketing to children. Therefore, led to over $10 billion spends on food marketing to children in a year. (“CSPI”) Because food marketing follows different tremendous approaches to attracting children, children are therefore enticed to embrace various kinds of food which pose a threat to their health.

Children are facilitated with food marketing strategy with the use of toys. While there are many approaches to food marketing to children, the giveaway of toys to children when they purchase fast food at various restaurants had become a bait for attracting children to get caught into the detrimental factors food marketing. According to Otten, et al., 2012, the use of toy and incentive distributions is becoming pervasive and increasingly popular in many restaurants in the country. A survey from the Federal Trade Commission showed a 2006 estimation that about ten restaurant chains expand up to $360 million to purchase toys that would be used and distributed with meals taken by children and also sold more than 1.2 billion meals with toys to children in the age bracket less than 12 years.

These analysis attribute to the fact that the meals sold to children are energy-dense meals, with poor nutrition, thereby contributing to obesity. (Otten et al., 2012) and this is common amongst these types of fast-food restaurants that pairs toys with their meals. With the raging detriments these meals were posing to children’s health, health authorities had to look into the advertising and marketing strategy used to bait children and observed the contribution to the development of food sales was of unhealthy eating patterns and behaviors and was leading to obesity in these children. This development led to the prohibition of the distribution of toys and incentives with foods or beverages sold to children on August 9, 2010 by the Santa Clara County CA. being the first United States jurisdiction to implement this ordinance. (Ken, 2010)

The use of television and other visual techniques of food marketing is another fascination to children. According to a research from Linn 2004, children with the ages of z and 18 spend about forty hours a week glued to different media devices such as the television, video, computer games, print media, and radio. These are devices that are commercially driven and greatly have an impact on the children. Despite the fact that there is a developing popularity of the computer games and the internet, children still engage in watching television, which is the primary electronic medium they are directly exposed to. Most of the time, they are alone watching the television, which implies there is no adult present to make them understand the messages passed across from the advertisements permeating from the medium. According to Rideout et al.,  about thirty-two percent of children within the age bracket of two to seven are provided with a television in their rooms, and about 65% of those within eight to eighteen, and only 26% of children under two years of age. (Rideout, et al., 2003)

With children spending more hours watching television and other media devices, they are exposed to several kinds of food advertisements that are eye-catchy and fascinating to them. According to Linn 2004, she stresses that when a two hour program is held on the Cartoon Network or even Nickelodeon, there are about twenty to forty food commercials within these hours, or one every minute. These food commercials advertise foods that contain a very high percentage of calories, sugar, salt, and fat. (Kotz, et al., 1994) The effectiveness of television advertising on infants and growing kids can be very overwhelming. Children always love to eat what they see in advertisements and they tend to buy these things when they are with their parents. It is generally noted that parents spend more during shopping when they are with their kids, compared to when they are not with them. During such shoppings, children manifest the wrong misconceptions they see on the television to requesting for food products and take food with increased calories.

Conclusively, this research has been able to show that food marketing is immeasurably pervasive in the lives of children, and it is a great detriment to their health status. Considering studies that have shown that about 40% of children’s diet is based on unhealthy fats and added sugar. (“Prevention Institute”) It is also seen that this great impact begins from the home, school or their immediate community through peers. It is great news to see that there are policies rising up to advocate for this children’s health status and fight to ensure there’s a reduction in the fascination of these foods. The policies are limiting the giveaway of toys with unhealthy meals to children in restaurants, utilizing license laws to ensure healthy preparation of food, and other strategies to ensure retailers create good and healthy food for consumption. The policies have also helped by inflating taxes on sugary carbonated drinks to make it more expensive for children and adolescent to easily afford, and also developing media messages to enlighten consumers and children about sound nutrition and fitness through awareness. (“Public Health Law, 2015”)