Effects and Control of Global Warming

Global warming, a recent warming of the Earth’s surface and lower atmosphere, is believed to be the result of a strengthening of the greenhouse effect mostly due to human-produced increases in atmospheric greenhouse gases. 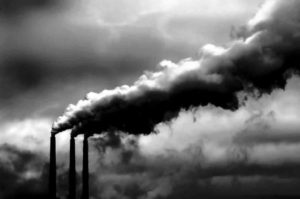 The greenhouse effect is a process by which radioactive energy leaving a planetary surface is absorbed by some atmospheric gases, called greenhouse gases. They transfer this energy to other components of the atmosphere, and it is re-radiated in all directions, including back down towards the surface. This transfers energy to the surface and lower atmosphere, so the temperature there is higher than it would be if direct heating by solar radiation were the only warming mechanism.

This mechanism is fundamentally different from that of an actual greenhouse, which works by isolating warm air inside the structure so that heat is not lost by convection.

The greenhouse effect was discovered by Joseph Fourier in 1824, first reliably experimented on by John Tyndall in 1858, and first reported quantitatively by Svante Arrhenius in 1896.

The contribution to the greenhouse effect by a gas is affected by both the characteristics of the gas and its abundance. The phenomenon that worries the environmental scientists is that due to anthropogenic activities there is an increase in the concentration of the greenhouse gases in the air that absorb infrared light containing heat and results in the re-radiation of even more of the outgoing thermal infrared energy, thereby increasing the average surface temperature beyond 15°C.

The phenomenon is referred to as the enhanced greenhouse effect to distinguish its effect from the one that has been operating naturally for millennia. The greenhouse gases present in the troposphere and resulting in an increase in the temperature of air and the earth are discussed here:

It contributes about 55% to global warming from greenhouse gases produced by human activity. Industrial countries account for about 76% of annual emissions. The main sources are fossil fuel burning (67%) and deforestation, other forms of land clearing and burning (33%). CO2 stays in the atmosphere for about 500 years. CO2 concentration in the atmosphere was 355 ppm in 1990 that is increasing at a rate of 1.5 ppm every year.

These are believed to be responsible for 24% of the human contribution to greenhouse gases. They also deplete ozone in the stratosphere. The main sources of CFCs include leaking air conditioners and refrigerators, evaporation of industrial solvents, production of plastic foams, aerosols, propellants etc.

CFCs take 10-15 years to reach the stratosphere and generally trap 1500 to 7000 times more heat per molecule than C02 while they are in the troposphere. This heating effect in the troposphere may be partially offset by the cooling caused when CFCs deplete ozone during their 65 to 110 years stay in the stratosphere. Atmospheric concentration of CFC is 0.00225 ppm that is increasing at a rate of 0.5% annually.

It accounts for 18% of the increased greenhouse gases. Methane is produced when bacteria break down dead organic matter in moist places that lack oxygen such as swamps, natural wetlands, paddy fields, landfills and digestive tracts of cattle, sheep and termites.

Production and use of oil and natural gas and incomplete burning of organic material are also significant sources of methane. Methane stays in the atmosphere for 7-10 years. Each methane molecule traps about 25 times as much heat as a C02 molecule. Atmospheric concentration of methane is 1.675 ppm and it is increasing at a rate of 1% annually.

It is responsible for 6% of the human input of greenhouse gases. Besides trapping heat in the troposphere it also depletes ozone in the stratosphere. It is released from nylon products, from burning of biomass and nitrogen rich fuels (especially coal) and from the breakdown of nitrogen fertilizers in soil, livestock wastes and nitrate contaminated groundwater. Its life span in the troposphere is 140-190 years and it traps about 230 times as much heat per molecule as CO2. The atmospheric concentration of N20 is 0.3 ppm and is increasing at a rate of 0.2% annually.

The incoming radiation from the Sun is mostly in the form of visible light and nearby wavelengths, largely in the range 0.2 – 4 1m, corresponding to the Sun’s radiative temperature of 6,000 K. Almost half the radiation is in the form of “visible” light, which our eyes are adapted to use.

About 50% of the Sun’s energy is absorbed at the earth’s surface and the rest is reflected or absorbed by the atmosphere. The reflection of light back into space – largely by clouds – does not much affect the basic mechanism; this light, effectively, is lost to the system.

Radiative energy losses become increasingly important higher in the atmosphere largely because of the decreasing concentration of water vapour, an important greenhouse gas. It is more realistic to think of the greenhouse effect as applying to a “surface” in the mid-troposphere, which is effectively coupled to the surface by a lapse rate.

It is estimated that the earth’s mean temperature will rise between 1.5 to 5.5°C by 2050 if input of greenhouse gases continues to rise at the present rate. Even at the lower value, earth would be warmer than it has been for 10,000 years.

With the increase in global temperature sea water will expand. Heating will melt the polar ice sheets and glaciers resulting in further rise in sea level. Current models indicate that an increase in the average atmospheric temperature of 3°C would raise the average global sea level by 0.2-1.5 meters over the next 50-100 years.

One meter rise in sea level will inundate low lying areas of cities like Shanghai, Cairo, Bangkok, Sydney, Hamburg and Venice as well as agricultural lowlands and deltas in Egypt, Bangladesh, India, China and will affect rice productivity.

This will also disturb many commercially important spawning grounds, and would probably increase the frequency of storm damage to lagoons, estuaries and coral reefs. In India, the Lakshadweep Islands with a maximum height of 4 meters above the sea level may be vulnerable.

Some of the most beautiful cities like Mumbai may be saved by heavy investment on embankment to prevent inundation. Life of millions of people will be affected by the sea level rises who have built homes in the deltas of the Ganges, the Nile, the Mekong, the Yangtze and the Mississippi rivers.

The global warming will lead to changes in the rainfall pattern in many areas, thereby affecting the distribution of vector-borne diseases like malaria, filariasis, elephantiasis etc. Areas which are presently free from diseases like malaria; schistosomiasis etc. may become the breeding grounds for the vectors of such diseases.

The areas likely to be affected in this manner are Ethiopia, Kenya and Indonesia. Warmer temperature and more water stagnation would favor the breeding of mosquitoes, snails and some insects, which are the vectors of such diseases. Higher temperature and humidity will increase/aggravate respiratory and skin diseases.

There are different views regarding the effect of global warming on agriculture. It may show positive or negative effects on various types of crops in different regions of the world. Tropical and subtropical regions will be more affected since the average temperature in these regions is already on the higher side.

Even a rise of 2°C may be quite harmful to crops. Soil moisture will decrease and evapotranspiration will increase, which may drastically affect wheat and maize production. Increase in temperature and humidity will increase pest growth like the growth of vectors for various diseases. Pests will adapt to such changes better than the crops. To cope up with the changing situation, drought resistant, heat resistant and pest resistant varieties of crops have to be developed.

There are numerous ways to stop global warming:

Reusing and recycling various products which we use in our day to day life can also help you in doing your bit to stop global warming. For instance, recycling paper will make sure that the large scale felling of trees to produce paper is stopped, and these trees will in turn absorb the carbon dioxide in the atmosphere and reduce global warming.

Unplugging appliances to save energy is yet another effective way to address the problems of global warming. Simply unplugging all the electronic devices which are not in use can help in saving 20 per cent energy. More importantly, it will also help in reducing your electricity bill by 10 per cent every month.

Similarly, keeping electronic appliances on standby also contributes to loss of energy and global warming, and therefore is best avoided. One may feel that keeping a single computer on standby won’t make a big difference, but when millions of people think in this manner it does make a drastic difference.

6. Use a Programmable Thermostat:

7. Promote the use of organic products:

Promoting the use of organic foods is also one of the effective ways to prevent global warming. The tendency of organic soils to capture carbon dioxide far exceeds that of the soil used in conventional farming. Estimates suggest that we can get rid of 580 billion lbs of carbon dioxide if we resort to organic farming for food production.

One of the leading causes of pollution, vehicles dump a great amount of carbon dioxide in the atmosphere. If we stop using vehicle we can cut down of great amount of pollution. If you can’t resist vehicle, you can opt to efficient driving tips, such as turning the engine off at red lights and driving at moderate speeds, and contribute in curbing global warming. Ideally though, you should opt for public transport or other environment friendly modes of transportation such as cycling.

9. Resort to Alternative Sources of Energy:

One of the most talked about global warming solution is to switch to alternative energy sources such as solar power and wind power. You can easily harness these sources of nature to generate power, and replace fossil fuels with it. Doing away with fossil fuels alone will help in reducing the huge amount of carbon dioxide in the atmosphere every day.