7 Things You Should Know About the Eco-Friendly Bags

Environmental degradation has soared since the turn of the twentieth century. This can be attributed partly to increased knowledge and technological advancements that have churned out a myriad of products that facilitate comfortable living. The problem arises when these products outlive their usefulness and have to be disposed of without causing harm to the environment. Producers and consumers alike contribute to environmental pollution in their efforts to respond to their needs and wants. Some efforts to stem degradation have had insignificant results, some, like the adoption of eco-friendly bags, are making strides in the right direction.

These are packaging bags with minimal or no harm to the environment; they are conventionally made of biodegradable material such as natural fibres as opposed to synthetic fabrics such as polypropylene. The materials decompose when exposed to the elements. The whole idea behind eco-friendly packaging is based on the use of organic materials to construct most or all the parts of the packaging. Innovation has led to the addition of chemical compounds to plastic bags during manufacture to make them biodegradable and hence eco-friendly. Re-usable and recyclable bags also qualify as eco-friendly (Davis 2008). 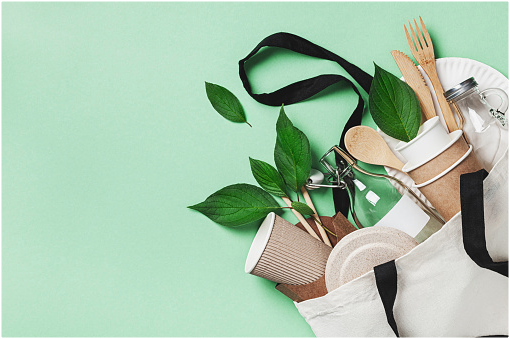 The packaging industry stands at the centre of this critical innovation. It is responding to an aggressive campaign by policymakers as well as consumers towards the consumption of environmentally-friendly products. Major retail chains such as Wal-Mart and Starbucks have their initiatives for ‘green’ packaging (Stern and Ander 2008). The realization of driving this innovation is that the responsibility of conserving the environment needs to be taken up by everyone.

The biodegradable concept makes use of fabrics such as hemp, vegetable-tanned leather, and organic cotton. The main push behind their use is informed by their property to decompose upon disposal, helping to solve the problem of blight caused by plastic bags. Reusing bags (e.g., bags used for shopping purposes) reduces waste arising from their disposal as fewer are used, and fewer are manufactured (Vasil 2009). This effects a percentage reduction in the level of land pollution. Recycling is majorly done on plastic bags to reduce the volume of this material that finds its way into bins and landfills. Some stakeholders have been known to push for policies and legislation which require that manufactures include recycled material in all plastic bags they produce (Hill 2010).

Environmentally-friendly packaging plays a significant role in efforts geared towards making the world a safer place to live in. Their use significantly helps in mitigating the soaring levels of pollution caused by the disposal of materials that do not decompose. The durability of reusable bags has the secondary effect of reducing the cost of packaging for both shoppers and retail operators (Stern and Ander 2008). As a Corporate Social Responsibility strategy, Companies that promote and distribute eco-friendly bags, cultivate customer trust and loyalty. The problems caused by plastic bags on the environment cannot be overstated; aside from being an unsightly litter to the landscape, they pose a threat to the survival of marine mammals that consume them. They are also stubborn contaminants to soil and water as they do not enrich its quality upon photo-degradation (Hill 2010).

5. What are the Downsides?

There have been concerns regarding the effort to make plastic bags biodegradable. Studies have indicated that these bags carry potential risks that may even be more harmful than clear polythene bags. Scientific research occasioned by the UK government found them to have harmful effects on the environment. Tesco, a leading retail chain with a presence in most parts of the northern hemisphere and a proponent for the use of this kind of packaging is already pulling them out of its stores (Poulter 2011).

This innovation is likely to revolutionize the future of packaging, with increasing numbers of producers and consumers opting to get on the ‘green’ train. Sustained awareness on the need to conserve the environment has ensured that consumers lean towards buying products made of or packed in eco-friendly material. Companies are also using this opportunity to gain leverage against the competition (Stern and Ander 2008).

7. The Implications of Broad Diffusion and Adoption of this Innovation

Adopting the use of eco-friendly bags in a large scale carries a lot of benefits to the environment. It will reduce the level of pollution by a wide margin; will reduce the amount of material that goes into production, and save energy. This innovation underlines the need for continual and constant efforts to adapting to environmental and technological changes if humanity is to reverse the damage it has inflicted on nature.