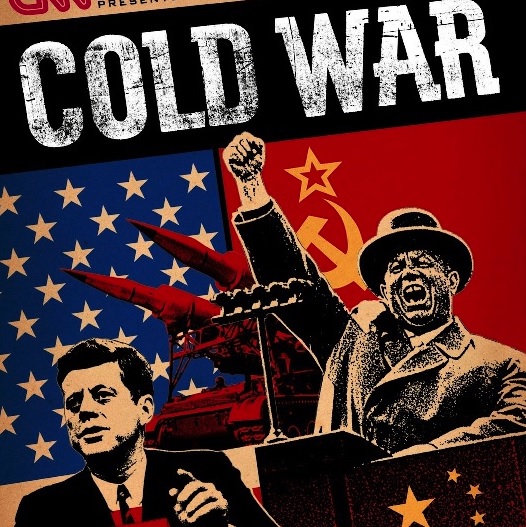 tolerate. The USA adopted capitalism while the USSR (Russia) adopted communism. In this case, the USSR was against the dominance of the USA of the other European countries while the USA did not tolerate the communist policy of the Soviet Russia. The arms race between the two superpowers also accelerated the cold war. The Soviet Russia increased the strength of its military by acquiring more arms. This prompted the US to start manufacturing deadly weapons thus paving the way for cold war. The Second World War played a critical role in the development of the Cold War. After the war, the two superpowers were inspired to upgrade their weaponry by using advanced technology. The arms race between these two superpowers enhanced their rivalry. For instance, in the year 1957, the Soviet Russia launched their first satellites known as Sputnik 1 and 2 in orbit. This prompted President John F. Kennedy to address the Congress to demand the Americans to go beyond the atmosphere. The first American astronaut known as John Glen heeded to his demand. He managed to go around the world three times in the year 1962. He was followed by other astronauts such as Valentia Tereshkova who become the first woman to go to space. The ability of the Soviet Russia to strengthen its military inspired the USA to start manufacturing dangerous weapons such as atomic bombs thus intensifying the rivalry. The USA adopted containment as their foreign policy during the cold war under the administration of President Truman. The policy was utilized the US to curb the spread of communism in Europe and other countries such as Africa, China, and Korea. The policy of containment came into operation between the years 1947 and 1987. The strange alliance came into existence between the year 1941 and 1945. It was an alliance that brought the USA, Russia and the UK together to fight the Axis powers. However, the increased demands of the Soviet Russia led to its disintegration giving way for the development of Cold War between the two nations.

The primary factor that led to the spread of civil war was the moral issue concerning slavery. The Southern States supported slavery while the Northern states were opposed to it. As such, the Southern states were committed to asserting their influence or authority to force the federal government to abolish the laws that interfered with the movement of slaves and their right to retain them. The South wanted to spread slavery to the newly acquired western territories which were opposed by the North. The formation of the Republican Party in the North which saw President Abraham Lincoln being elected in 1860 dealt a major blow to the South. They felt isolated. As such, they resorted to political decisions that ultimately led to the American Civil War. In February 1861, the Confederate State of America was established with Jefferson Davis as the President. Numerous changes took place during the civil war between 1861 and 1865. For instance, in the South over 3.5 million slaves were freed and were able to achieve the same status as the former slave owners. Racial prejudice intensified in the South, and it replaced slavery. In the year 1862, President Lincoln approved the Pacific Railway Act which created several job opportunities and led to the development of various urban centers in the North. Besides, more people found it easy to move to the urban centers thus opening more industries in towns. The federal government formed the Freedman’s Bureau in the year 1865 to protect the former slaves. The Congress passed the 13th Amendment to end slavery in 1865. The American Civil War represents American Second revolution since it led to the development of industries and mechanization in the North which replaced human labor (slavery). The war led to economic, social and political developments in the US. The war brought an end to the slavery and the planter class.

The United States colonized Puerto Rico in the 19th century. This gave it the opportunity to develop policies that dwelt much on democracy thus strategically positioning itself as an imperialistic nation. The United States also become a major player in the international trade allowing it to become an imperialistic country. The Spanish- American war that took place in the year 1898 under the administration of McKinley played a critical in the rise of the US to become an imperialistic nation.  The Treaty of Paris gave the US an opportunity to acquire more territories from Spain such as Philippines, Puerto Rico and Guam. This increased its dominance in the international affairs. The US also adopted flexible imperialistic policies during the reign of President McKinley, George Bush and Bill Clinton that increased its activities in the international community. The building of the Canal and participating in the affairs of the Caribbean made the United States overcome various obstacles making it influential in the world. The activities of the US in the WW II also enabled to become an imperialistic country.