Mini Cooper from BMW is one of the favorite cars of the people all over the world. It is sold in more than 70 countries in the world.  ‘Designed in 1959 by Alex Issigonis – a Turkish-born émigré to Britain who also designed the Morris Minor, another iconic small car, the Mini Cooper has captured the present US market. “The contemporary Mini, a Swinging 60s vehicle reincarnation that was a hit in its indigenous Britain but never really caught fire overseas, has been warm since it was reintroduced in Europe in 2001 and in the United States and Japan in 2002. Demand in the United States, especially, has taken off, thanks to a marketing strategy designed to build mystique through stealth advertising and limited distribution”( Maynard)

“From the toggle switches for the windows and fog lights to the rocker buttons for the fan-speed controls, every switch and dial in the Mini feels of a piece with Mini and only the Mini. In truth, some of the components are gently massaged BMW parts, but that’s not really obvious. And besides, BMW is a prestigious brand, so it’s not as if you’re getting second hand Daewoo stuff in your Mini”( Frank). Mini Cooper is not only attractive in appearance, but it is filled with lot of useful features which other cars of same type may not possess. Its hatch layout is well designed, with a low well for groceries and with seat uprights that flip forward 50/50.  Mini Cooper excels in safety features also compared to its competitors. It has defeated its competitors in most of the road tests and also excelled in National Highway Traffic Safety Administration crash tests. Moreover, it comes with six airbags (front, side, headliner), while its competitors only has standard front airbags. For an additional $500, people can purchase a Mini Cooper with stability control that will help keep the car on track in an emergency situation. 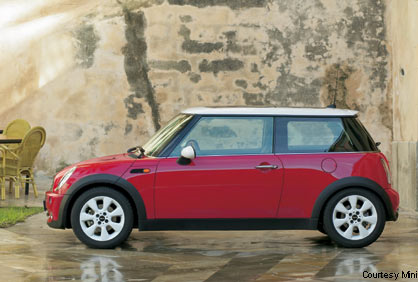 ‘A marvelous marriage of British character and German know-how, the 2009 Mini Cooper is stylish, fun to drive and remarkably good on gas. Stellar fuel economy, sharp handling, excellent all-around performance in S and John Cooper Works trims, endearing retro styling etc are the major features of the 2009 model of Mini Cooper’ (2009 MINI Cooper Review). With turbocharged engine, upgraded brake system, increased stability control and sporty look, the 2009 model of Mini Cooper looks far better in appearance and functioning. Higher-quality cabin, more comfortable seating and comfortable interior controls are some other major changes of the 2009 model Mini cooper. Another important feature of the new Mini is the optional lights package which features custom ambient illumination. “A panel of toggle switches in the roof lining allows the driver to switch the colors of the lights in said roof lining; the door storage pockets and the grab handle recesses. These can be changed at any time in five stages from warm orange to sporting blue, depending on personal taste – quite mad, but undeniably funky. Rear seat space, a big grumble amongst MINI customers, has been improved with recessed knee cut-outs in the fabric-trimmed front seat backs” (MINI Cooper: JUST LIKE THAT)

Even though irrespective of the age, gender or cultural differences, mini is acceptable to all. But still, as a marketing strategy BMW specifically targeting young people and slightly old people. ‘Those who aged 20-34, are experimental in outlook; enjoy trying new things and tend to be spontaneous and active. They like to stand out in a crowd and drive a vehicle noticed by individuals. They have a keen feeling of style and think they are being told a lot by a vehicle. MINI fits in with their picture and attitude towards life. They’re looking for the cutting edge and what’s fun and interesting. The second group is slightly older – likely to be 35-50 and represent a more affluent, yet progressive-thinking household. The third group would include classic car aficionados and Mini enthusiasts. These people have a keen interest in cars and have fond memories of the classic cars from their youth’ (MINI COOPER: A Modern Interpretation Of An Automotive Legend).

Britain, United States, Japan, Germany, Italy etc are the top market for Mini Cooper. In fact in these countries, no other car manufactures were able to beat Mini as far as selling or market share is concerned. BMW has utilized its brand value and expertise in marketing to make Mini the favorite car of many countries. They have realized that customers are interested in benefits rather than features of a product. The words like Mini, Midi, and Micro usually associated with computers and the general public think of highly sophisticated and technologically advanced machines, when they come across with such names. The word Mini is too cute and sexy and nobody can avoid having a look at the brand even if they are not interested in it. But at the same time, though the meaning of the word Cooper may not be sound, the careful mix of these two words made the name “Mini Cooper” more attractive.

A simple marketing strategy always works better than a complicated one and BMW knows this fact better than anybody else. They realized that Mini is for common people and hence the advertising must focus such segments of the market. BMW has focused mainly on the strategies of micro marketing instead of the mass marketing for Mini Cooper. The common people are experiencing a fatigue as far as the volume of advertisements injected into their minds daily by different product advertisers using different channels. Instead of going for the mass, micro marketing focuses specific marketing segments. For example, Mini Cooper aims to draw the attention of mainly young drivers aged 20 to 34. Perhaps Mini Cooper was the first one who successfully implemented the micro marketing techniques. Even the corporate giants such as Coca Cola and McDonald’s have started to follow the strategies of micro-marketing after watching the success of Mini Cooper marketing strategies.  In an overcrowded market place, it is economical to spend more money on targeting specific market segments rather than the mass marketing. Mini cooper has used Magazines, News papers, Television, and internet like sources to reach the specific market segments. They also utilized sports areas with digital billboards, and also spend more money to put their brand names in popular sports stadiums to attract youths as well as the old. They also utilized cell phones for marketing with instant messaging

Mini Cooper was not a big success initially in US and The Mini’s re-entry in to the United States market in 2002 was carefully planned. The unusual marketing strategies made the car a success in US market today. In Britain, the Mini remained on the market for more than 30 years, but in all that time in the United States, only 20,000 were sold. BMW’s marketing strategy was difficult to think for its reintroduction into the U.S. market. It deliberately limited American sales to about 25,000 annually, out of the 200,000 that are produced each year. BMW has promoted the car through internet rather than the television. They have stopped all the advertisement on national television and concentrated heavily on internet, in ads painted on city buildings and on baseball-type cards handed out at auto shows. To intrigue passers-by, BMW put Minis on top of sport utility vehicles and drove them around 24 cities.

“Mini sends a” covert “kit to the owners — mocked as a wizened-looking book — which will include unique glasses, a decoder and a” magic window descriptor.” Using these, web addresses can be found in the advertisements that lead to free awards and invitations to activities. Non owners will just have to feel slightly jealous that they’re out of the loop (Business week). The above marketing strategy was to get owners active about the brand and to develop the curiosity of potential buyers. It’s a type of covert and overt campaign at the same time. If you get the kit, you’re rewarded. If not, you may feel desperation for not owning a Mini which may force you to consider the purchasing of a mini next time when you think of going for a new vehicle.

Another marketing strategy adopted by Mini USA begins delivering custom messages to Mini Cooper owners on digital signs which the company calls “talking” billboards. “The boards, which usually carry typical advertising, are programmed to identify approaching Mini drivers through a coded signal from a radio chip embedded in their key fob. The messages are personal, based on questionnaires filled out by the owners: “Mary, moving at the pace of justice,” if Mary is a lawyer, or “Mike, speed is the special of the day,” if Mike is a chef (FEDER). These talking billboards created enormous interest among the people in US. The messages were customized and related to the customer survey questionnaire. Public who notices such talking billboard ads may feel something special about Mini Cooper and may keep a hidden attraction towards Mini in their minds. After running through three personal messages the talking sign switches back to the standard Mini advertising. This innovative marketing strategy was introduced effectively by Mini in United States.

Brand development is an important aspect for the successful marketing of any product and Mini Cooper has implemented some unique strategies for brand development also. The graphics and the colors used in the advertisements of Mini Cooper were selected after careful evaluation of the changing trends of customer preferences and choices. “MINI uses a recognizable graphic style, with brightly colored boxes around text and the same typeface, or font, for all its communications. All the marketing from MINI, is written in the same style, or ‘tone of voice’, using cheeky, intelligent humor, to make MINI feel gutsy and fun. It all has the same personality. At the heart of the brand is the car itself. Much of the MINI personality comes from the uniqueness of the design and the exciting driving experience” (Mini Education).

MINI Coopers has included testimonials from previously defrauded consumers as part of their marketing strategy. There are some dangers associated with using customer testimonials as a marketing strategy since the customer interpretations might be misleading. Even though some analysts criticized such a marketing campaign because of the misleading quality, which could leave its target audience feeling betrayed, the strategy worked well so far in sustaining good selling of Mini.

Usually a product undergoes five different stages during its life span in the market; (1) product development; (2) introduction; (3) growth; (4) maturity; and (5) decline (Product life cycle) The life of the product starts from the product development stage. During this stage the firms conceptualize their product. Introduction of the product into the market is the next stage. This stage normally characterized by low sales and low profits. During the growth stage only the product will be able to deliver high sales and profits to the company. Maturity stage is the key stage in product’s life cycle and after maturity stage the sales of the product will start to decline. Perhaps, Mini Cooper can be considered to be in the latter half of the growth stage and the maturity stage seems to be not far away.