Alcohol-Related Deaths in the United Kingdom

Alcohol consumption has been one of the causes of mortality in the United Kingdom. Alcohol-related deaths may result from people losing their lives in road traffic accidents or from alcohol-related diseases cause death among people who drink alcohol. One of the major causes of road accidents in the United Kingdom is as a result of driving under the influence of alcohol. This leads to loss of lives of people who are driving while drunk as well as the innocent passengers, cyclists, and pedestrians at the scene of the accident.

It is shown in the report that the number of people dying as a result of consuming alcohol considerably rose yearly between the year 1992 and 2008. The report provides evidence that the number of deaths was twofold. Alcohol-related deaths rose from 4023 to 9031. This shows that there was an increase in alcohol consumption among people in the UK between 1992 and 2008. The increase in the number of people drinking alcohol increased the probability of more people dying of alcohol-related deaths. This means that there was an increased risk of exposure to alcohol deaths as a result of more people becoming alcohol consumers (Berridges, 2007). 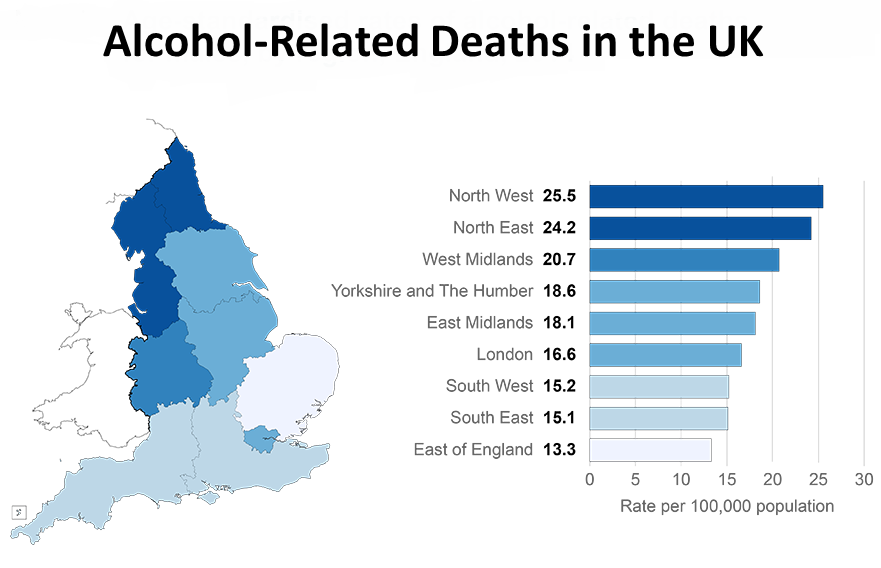 The report confirms that 66% of the 8664 deaths that were recorded in the United Kingdom in the year 2009 were men. This implies that just 34% of deaths in that very year were females. This could be due to the fact that the number of females consuming alcohol decreased as that of males increased. This led to more males drinking alcohol compared to the females. This means that males were at higher risk of dying as a result of consuming alcohol, as opposed to females. It means that there was either a decrease in the number of women drinking alcohol, or women reduced their consumption rate of alcohol. As a result of this, their risks of dying of alcohol –related deaths were reduced. On the other hand, there was either an increase in the number of men who consumed alcohol, or perhaps just raised their consumption rate. This puts men at a higher risk of dying due to alcohol-related deaths compared to women. It is evident from the report that the number of men drinking alcohol is higher than that of women consuming alcohol in the United Kingdom. If the trend continues, there will be more alcohol-related deaths among men than women due to high risk of exposure in the former than in the latter (Bromley et al., 2007).

The report shows that in 2011, liver disease caused 66% of deaths among alcohol consumers in 2011. This proves that there was an significant rise in the rate of alcohol consumption leading to the liver being affected by excessive intake of alcohol in the body.

The deaths also resulted from alcohol consumption due to road accidents and other forms of accidents that occurred after consuming alcohol. It is remarkable that people who are involved in irresponsible driving after drinking alcohol end up losing their lives, and the lives of passengers and pedestrians as a result of road accidents.

The study involved repeated cross-sectional surveys which were conducted nationally in the UK. The study also relied on a number of autonomous and credible reporting trends describing the consumption of alcohol from the secondary analysis which are not provided in all the official publications of the survey (Dolman et al., 2007).

The Inclusion and Exclusion Criteria

The study population had to be from the United Kingdom, and covered any ethnic or age group. The report also included trends of alcohol consumption among men and women in the UK over a period of time. The study only focused on the consumption trends between 1992 and 2011.