Advantages and Disadvantages of Expanding a Business Through Franchisees

A franchise can be described as a business agreement in which the franchiser (business owner) allows others (the franchisees) to own as well as operate a business on his/her concept and trade name. According to Tassiopoulos (2009), franchising is a proven business strategy developed by a franchisor that permits the franchisee to make use of its established trade names, propriety business strategy, and methods of carrying out business; in return for a recurring payment that involves a given percentage of gross profits or gross sales, along with a yearly fee. 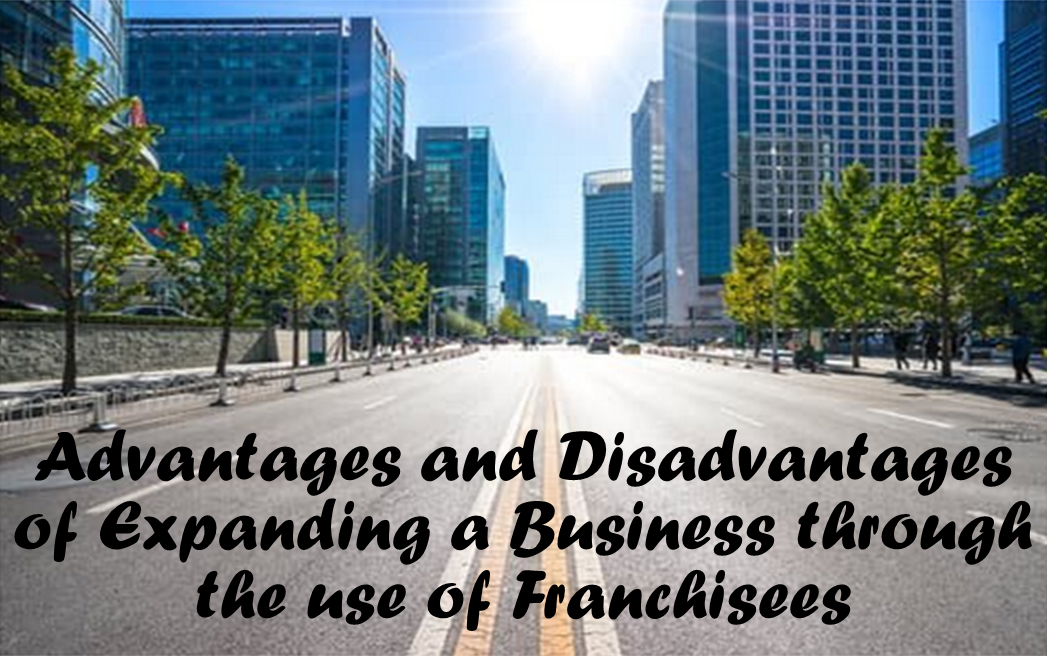 One of the biggest advantages offered as a result of expanding a business through the use of franchisees is self-funding expansion. According to Talloo (2007), a franchiser is able to expand the business rapidly without incurring much additional cost since the initial costs of creating and providing the franchise such as launch support, training, intellectual property rights, software license and site selection are normally recovered by the franchisee. Additionally, investment requirements to open each business operation, including vehicles and staff recruitment, lease, store fittings, is undertaken directly by the franchisees.

The ongoing costs of marketing, promotional activities, sales, websites, ongoing communications, providing support and managing the franchise network are also met by an ongoing management service fee provided by the franchisee, normally as percentage of the franchisee’s turnover. The only costs met by the franchisor are that of the overheads that are not met by the franchisee’s opening franchise fee (Moschandreas, 2000).Franchising as a business expansion strategy therefore requires less capital outlay compared to other business expansion strategies. Additionally, as a result of the self-funding expansion, franchisers find it easier to open multiple units, thus, gaining the competitive advantage on any prospective competitors. The multiple developments of units increase the firm’s advantage within the marketplace.

Another advantage offered as a result of expanding a business through the use of franchisees is in terms of risk minimization. According to Li-Tzang & Kansas State University (2007), previous research has indicated that franchise arrangements arise largely out of the need to share risks. Investing in a new a business is normally risky and most studies reveal that more than 90% of new investments fail within 3 years. Franchising substantially reduces the possibilities of business risks.

As highlighted by Spencer (2010), a franchisor is able to plan for these business risks and is able to reduce their exposure through contractual stipulations such as performance standards, clauses that shift legal responsibilities to the franchisees, restrictions on the use of intellectual assets as well as reporting requirements. The franchiser is also able to use a contract form as well as its provisions not only to protect the brand, but also to protect his/her business against risks of conflict or failure in the relationship.

Moreover, franchising allows franchisers to maintain their control over profitable units with more predictable returns while shedding fairly risky locations with uncertain revenues. To a franchise business therefore, franchising, implies spreading business risks by increasing the number of locations through the franchisees’ (other people’s investments).This implies faster expansion of networks and a better opportunity to put focus on the changing market needs, which in turn means reduced effect from business competitors (Tassiopoulos,2009).

Tesco, a UK supermarket brand present an example of a firm that has employed franchising to help it minimize business risks. The supermarket opened 18 franchise stores outside the UK and has seen it and the franchisees share the cost of opening the stores as well as the subsequent profits (Fletcher, 2010).

A franchisor also accrues the benefit of rapid expansion and increased market strength bye using the investment money provided by the franchisees. As a business growth strategy, franchising enables an existing firm to rapidly expand in terms of the number of outlets for its products and services without investing excessive capital or practical managerial input (Tassiopoulos,2009). This means that the franchiser is able to have his business expand rapidly with minimal capital outlay as compared to the cost of opening up new branch offices. At the same time, the franchiser does not loose his/her control over the products, marketing and delivery as in the case of a licensed agreement. Franchising therefore gives the franchiser an easier opportunity to exploit various geographical areas that would not otherwise be within reach.

An aspect of the rapid expansion of such firms as a resulting of franchising and increase its sale is that the expanded business as a whole gains market strength. The enhanced market strength often comes with advantages, including bulk buying from various suppliers of products and services. This business expansion strategy has made it possible for giant firms like MacDonald’s and Marks & Spencer to grow rapidly, while at the same time, increasing their market strength globally. For instance, McDonald’s chain of fast food restaurants has currently more than 2000 outlets globally, with only 25% being company owned. According to Moschandreas (2000), MacDonald’s reliance on widespread franchising has been a strategy that the firm has taken on after some experimentation given the fact that the proportion of the firm-owned stores increased from 9% of the total number of stores in the year 1967 to 33% in 1976.

Expanding a business through the use of franchisees also offers operational benefit to the franchisor. Franchised firms are normally larger in terms of outlet numbers. In international operations, distance and time increases uncertainty levels due to the information gap (Whitehead, 2010). It is therefore difficult and expensive to gather as well as receive information about foreign business operations on time. In addition, cultural differences may also increase the cost of gathering information. Franchising therefore offers the franchisor with an opportunity to have a smaller central organization instead of owning locations themselves. As a result, franchisers are able to easily manage their operations even within foreign markets and with minimal investments.

Franchising also implies standardization of procedures, which reveals consistency, enhanced productivity levels in addition to better quality. As highlighted by Whitehead (2010), global franchising has proven to be a significant strategic option in the foreign expansion of UK mixed retailing businesses. It offers firms with opportunities to gain access to foreign markets within minimal investment and high returns. For Marks & Spencer, one of the United Kingdom’s leading retailers, franchising plays a pioneering role.

Additionally; the franchisor acquires a higher return on investment by being able to concentrate his resources in expanding his business, instead of investing on additional plants, equipment and overheads. With a franchising business arrangement, nearly all the costs are met by the franchisees. However, despite the fact that revenue collected from the franchised units is normally less than those received from the firm-owned outlets, a greater percentage of the revenue is profit (Tassiopoulos,2009).

This business expansion strategy has made it possible for giant firms like MacDonald’s and Marks & Spencer to grow rapidly and increasing their market strength globally. As a result, they have benefited much from the higher return on investment that comes with expanding their businesses through the use of franchisees.

Expanding a business through the use of franchisees also involves a number of disadvantages. One of the most significant disadvantages that come with this business growth strategy is in terms of sales. Talloo (2007) highlights that all franchise firms are normally sales-driven at the start; as a result, this implies that one has to have a very effective franchise marketing programme with very resourceful sales people.

Franchise sales effort can be affected by a number of variables including interest rates, the state of the national economy, competition, the willingness of banks to provide loans for the franchise, etc (Talloo, 2007).Therefore, in franchising arrangements, if a business is not growing, then it is dying. A franchiser must therefore ensure the franchise business has the franchise income fee so to enable the franchise stay in business until there is a sufficient amount of royalty income to attain the monthly break-even.

Usually if the case ends up in a law court, the franchisor will most likely lose since the legal system has a very uneven playing field for the franchiser in terms of legal proceedings. The best way to avoid such conflicts is for the franchiser to offer his/her franchisee the best support as possible and make them successful.

A significant example of a conflict involving a franchisor and franchisee occurred between Burger King, an international fast food chain and its Israel franchisee. This was due to a violation of contract dispute. The case drew out reactions from members of the Arab League and the Islamic nations who made a threat to the company for legal injunction including revocation of the firm’s business licenses within the member nation’s territories (BBC News, 1999).

Managing growth within a franchise business forms another significant negative as the problem of managing can always prove to be fatal. As highlighted by Talloo (2007), franchising as business expansion strategy is a very efficient way of rapidly expanding a business, because the strategy has very few limits that inhibit growth. However, managing growth in a franchise business is not always easy. Firstly, the franchisor has often no direct, hierarchical control over his franchisee. Moreover; the franchisee is usually an independent contractor, and not an employee. As a result, the franchisor is able to damage the overall reputation of the franchise if they do not adhere to the firm standards.

Management within a franchise system is therefore more complex when compared to a truly uniform as well as a hierarchically managed system of a firm-owned unit. Great effort and resources are therefore needed to ensure the franchisees are successful. Burger King, an international fast food chain restaurant presents an example of a franchising firm that has suffered due to management problems that involved a lack of effective control over its franchisees. However; it was only after Pillsbury’s management hired an assertive executive from McDonald’s that the firm began to exercise effective control over its franchisees (Burger King Corporation,2011).

From the above analysis, what is evident is that, just like any other business growth strategy; business expansion through the use of franchisee has both advantages and disadvantages. The advantages of expanding a business using this strategy include benefits in terms of self-funding expansion, risk minimization, rapid expansion and increased market strength, higher return on investment and operational benefits. On the other hand, the disadvantages of this business strategy include Conflicts between the franchisee and the franchisers and negative effects that may effect on sales. However, what is evident is that expanding a business through use of franchising has a lot of advantages, therefore forms a good strategy of expanding a business.