Adam Smith advocated for state intervention in the market in certain circumstances. His book, “The Wealth of Nations” did not only focus on a single ideology; it focused on multiple systems of thought. He discussed public finance in the last part of the book. Taking a look at his theory; it is obvious that most contemporary public economic concepts such as borrowing as finance tools, the economic effects of taxes, public expenditures, and public finance were first advocated for by Adam Smith.

According to Adam Smith, the purpose of the political economy is to enrich both the sovereign and the people. The market and the state are integral features of the political economy.  Both the state and the market have their weak points. The image created of Adam Smith as a fanatic of a private market that is purely controlled by free market forces is wrong and misconceived.  He acknowledged that market forces could not be left to control the economy on their own because of the monopolizing spirit and rapacity of manufacturers and merchants. Adam Smith does not advocate for exclusive state intervention. So long as merchants do not violate the laws of natural justice, they can be left to pursue their economic interests freely so as to build capital and industry. 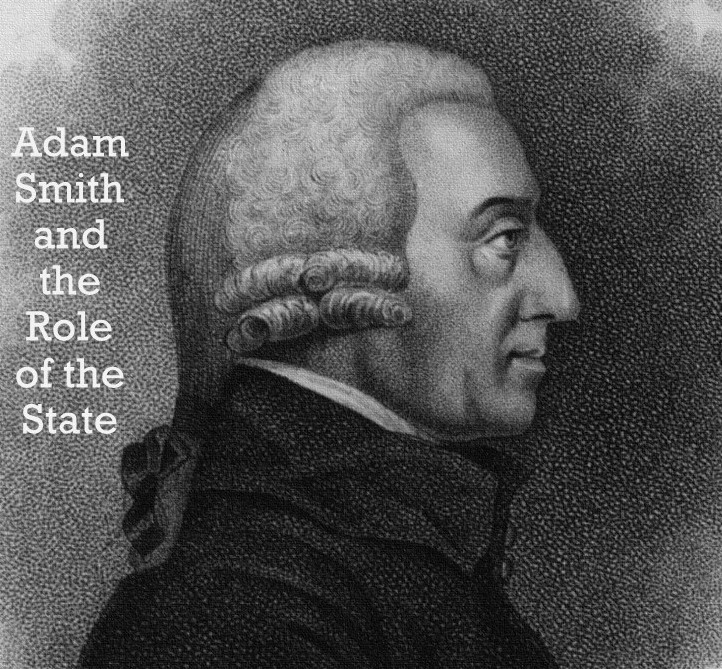 The capacity of the society is the main source of employment and wealth in a state. Regulation may not increase the capital or industry in a state, but it may redirect it into a specific sector of the economy that is advantageous to the society.  The redirection of capital that Adam Smith talked about refers to the development of a monetary policy by the state or the use of commercial regulations to self-finance a budget deficit in an economy.

Adam Smith objected to limitations and regulations in most economic sectors, but he advocated for state intervention in some economic sectors. They include the Banking and Finance Sector, defence and navigation; wages; incentives to advance industries; security; financing of public institutions and public works; the post office; company structures; monopolies; education; disease prevention; mortgages for boats, houses and lands; limitation of exports in times of necessity; borrowing rates and taxation policies. In Adam Smith’s point of view, the state has a right to intervene in the market whenever there is a possibility that individuals may breach natural liberty and endanger the society.

Adam Smith’s case is still applicable and convincing in today’s modern world. He correctly stated the duties of the sovereign as being provision of infrastructural services, justice, and security. He correctly surmised that taxes should be the main source of revenue for public services financing.  Today, the equity taxation principle is still used to finance most of the national economies in the world. The state still has the right to intervene in the market during times of extraordinary situations such as natural disasters and wars to ensure that it does not have a deficit in its budget.  State intervention in the market is still necessitated by the need for a long-term healthy economy and social peace.  If the economy is left purely to the control of market forces, the security and sovereignty of a nation can be compromised by greedy merchants. The state needs to intervene to ensure that the principles of natural liberty are observed in the market. Excessive state intervention can ruin an economy. The state should only intervene when it’s absolutely necessary to do so for purposes of public interest.