A Review On Kidnapping  (The Unredeemed Captive)

Kidnapping is a term that is typically employed in allusion to horror. Additionally, as Noelle Oxen handler noted in her expression of Polly Klaas’ kidnapping, the definitive dismay for parents refers is the years and years’ work or the comprehension that one’s child has a fortune that is different from that of the parent.

In this case, The Unredeemed Captive: A Family Story from Early America, represents a non-fiction portion that discusses Eunice Williams’ kidnapping. On the same note, the Kahnawake Indians kidnapped Eunice Williams while she was only seven years of age. In this piece, John Demos develops this sense of terror in the family of Williams when Eunice fails to return to her Puritan home.

As time advances, Eunice Williams obtains the name, Marguerite. Marguerite refers to an official mark of Eunice’s rebaptism as well as a submission to the Catholic Church. In other words, via the minor and major themes of gender roles, religion, and self-identity, alongside the book’s organizational flow, the writer gives the readers a historical overview of the Indian-white interface as well as gender concerns that Eunice encountered helping modify the American society of today. 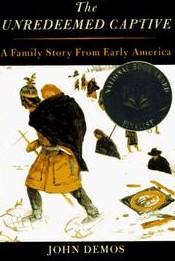 The first arguments of this book are the freedom of discovering the self-identity of one according to personal decisions, and religion. Adding to this further, upon the cabin of Williams getting invaded, the travelers are apprehended for later transportation by the Kahnawake tribe to Canada.

The travelers are afterward released. Nonetheless, the Kahnawake released the captives with except for Eunice. Later, Eunice ultimately weds an Indian thereby becoming part of that tribe. Upon knowing that the new tribe does not consider freeing their captives as an ideal custom, John Williams understands that his odds of saving his daughter are almost negligible.

Despite Eunice being a Puritan minister’s daughter, she is baptized thus reforming her into a Catholic. This part demonstrates some of the greatest revolutions of Eunice throughout the piece. Further, the transformation presents one of the greatest exploits of the Jesuits.

“I told her she must pray…for His grace every day…I told her she must be careful she did not forget her catechism and the Scriptures she had learned by heart”. Irrespective of the attempts of John or his loved ones to “free” Eunice by helping her uphold her Puritan heritages, the Jesuits declined to free her.

To make matters worse, after developing a bond with her newly wedded family, Eunice was not willing to return to her Puritan family either. Eunice remains impassive, and silent in her new home. She does not present any sign that she needs to return to her original family. In the book, the author notes that Eunice showed no flicker of interest or even warmth.

The author adds that she married a “savage” at an early age thereby choosing to enjoy her life as a Jesuit, and ultimately forgetting how to converse in English. Finally, with this emerged the assumption that if she failed to back to her original home, God would rebuke her. Throughout this period though, they had disregarded the religious lenience they shifted to the United States for primarily.

The author focuses on minor themes to present his source work. Pursuing this further, among the minor themes in this piece revolves around gender role. The theme stresses the relevance that gender portrays in the book. The theme also emphasizes on the role gender plays in both societies that led to the decision of Eunice for failing to return to her genetic parents.

Furthermore, women were inferior and submissive to men in the Puritan society. On the same note, the Kahnawake tribe valued women in their culture. Furthermore, Eunice was a foreigner, a female, and a captive, although under no circumstance did the Native Americans consider her as a servant or as inferior; they treated her as an equal.

Women, in the Puritan society, were curbed to their gender positions. The Puritans looked down upon women when they disregarded the culture’s customs. Besides, women were exclusively accountable for the family and the household. In that, their roles included doctoring their families, cleaning, cooking, as well as gathering of herbs. Men controlled women in the Puritan society.

Additionally, it was customary for men to head with the hierarchy creation. Thus, men in this culture headed their families considering that people considered them as superior to females. On the other hand, men became their families’ breadwinners, worked on the land, and traded. Puritan men were as well allotted to communal roles in which women lacked the capacity of participating.

In addition to this, while the roles of Iroquois men revolved around hunting and taking part in the war, women’s roles termed them as responsible for property and family. Unlike the Puritans, Iroquois men not only welcomed foreigners but also considered them as equals. In the Puritan society, people lacked the open-mind regarding cultures with different beliefs from theirs.

The author narrates the tale in the present tense from John William’s perspective but uses flashbacks for switching to the past. John Williams structures the account of his confinement by diving the story into four portions and chronologically. In the first place, the “pastoral letter” John Williams engraved to the detainees who came back home in 1706, August.

The second part focuses on a “lecture” he presented in December, days after he came back. His famous “narrative” was the third part drafted in 1706-7 during the winter and published around May. The fourth and last part concerned his talk “God in the Camp.” In this case, John Williams delivered this sermon in March before the General Assembly and the governor.

With the application of the primary sources since the start to culmination, John Demos precisely fascinates what took place in the 18th century in New England. The author as well incorporates some sections and the spelling used from the colonial era, which complements the piece’s overall tone. Therefore, through the structure in which he organizes all parts, the reader gets an overview of the captivity’s perception of William.

Overall, the book presented more of a sensitive appeal, tragedy, than any other thing. The biggest concern for most readers revolved around how a teen at a very early age gets divided from her family as well as the manner in which such a child manages to develop a different life without her parents’ support.

Another concern was on the way she progressively transforms into a Native American woman or different from the English girl Williams once recognized. The aspects are resulting in her definitive decision to never return to Williams regardless of his tries to authenticate the difference in gender, class, and race between both Native Americans and Puritans.

It might be wrong for some readers to assume that Eunice remained with the Kahnawake as a result of the antipathy towards her parent. Probably, she remained there since the woman’s role in the Puritan society as a caregiver was specific. Thus, the journey of Eunice helped her in realizing herself as well as longer recognizing her backgrounds, but her conversion into a Native American society.

The captivation linked to Eunice Williams reveals the ingenuity pursued by some early Americans to begin a new life, thereby abandoning their cultures, roots, and beliefs. All through the duration that Eunice stays with the Native Americans, she enjoys her freedom. Furthermore, even John Williams did not provide her with such freedom.