Understanding Conflict Management in the Workplace

Causes of Conflict at Work

Keeping the teaching profession in view, here some of the examples will be described to explain real world situations that how conflicts can come in reality at any workplace. In teaching department, there can be several resources, which need to be sued for betterment of students as well as the educational institutions. If teaching institute will have extra resources, then conflict can arise that how to usefully spend those resources. On the other hand if resources are not enough, then concern authorities may involve in conflict that how to use these resources, and where these resources should be used. The difference in personal values also can cause different conflicts in teaching institute. For instance, if the principal of a college wants things in one order because he has authoritarian personality, but a teacher don’t endorse authoritarian style, rather he/she wants to do something in his/her own manner. Here a conflict will come in the way of progress, and it can damage the benefits of the students. A conflict can emerge due to perception as well. Like if a principal has some negative perceptions about a teacher, then conflict can be there due to perceived thinking by the principal. 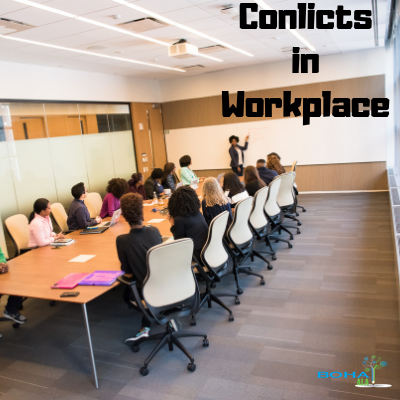 The Stages in The Development of Conflict

The things don’t look to have any conflict at a workplace in the first pace, but sometimes, these conflicts appear suddenly. It actually means that there are different stages for conflicts, where conflicts are developed until someone gets to know about them. There are five development stages to develop a conflict into reality. The first stage is called Latent Stage. It is a stage, where things don’t look conflicting in appearance, but conflict is certainly there. The issue of this stage is that people involved in conflict don’t know about it, until it is brought to the scene by someone. For instance, a teacher is preparing an exam for the students for other chapter 4, whereas it was supposed to be about chapter 3. In this situation, both teacher and students do not aware of the conflict, until they get to know, when they will see the exam paper. The second stage in the development of conflict is Perceived Stage (ROB, 2014)

It is a stage, where conflict comes to the scene and involved parties get to aware that both have misunderstood a position, so a wrong decision has been made by one party which caused the conflict. Like when teacher will give the exam question to students and students will notify that wrong chapter has been used by the teacher. The third stage is called Felt Conflict. It means that both teacher and students have come to know that something went wrong between their communication, and due to lack of proper communication and understanding, the teacher has made questions for chapter 4, whereas students think it was to be chapter 3 in the exam. The fourth stage is called Manifest Conflict, where both parties argue about the issue to prove that who is right and who is wrong and caused the conflict. The last stage is called Conflict Aftermath. It is a stage where involved parties will look for resolution or dissolution. Like the teacher and students will try to argue and make a final decision that who was wrong, and now hat should be done for the exam.

The Effects of Conflict on Individual and Team Performance at Work

Any organization or business firm has some kind of objectives, which they want to achieve with the help of individuals as well as teams. So, it is important that things work in order as per the plan so that objectives are easily achieved. But when conflicts arise, they are a big hurdle in achieving those objectives. The bad thing about conflict is that it can not only affect an individual’s performance, but it can also harm the overall team’s performance. It is very rare that sometimes a conflict may come up with some good result, but most of the time its effects will be negative. For instance, the above mentioned example from real world situation is a good one, where a teacher has made a wrong exam paper, whereas students have prepared for any other chapter. In this situation, the students can face a lot of stress and pressure, and they also may feel low on motivated as well, which can decrease their productivity (Brookins, 2018)

If students will feel pressures like this, then they will show more absenteeism. It is important for teacher to understand that due to some miscommunication and misunderstanding, this conflict has arise, but if they want to mitigate the effects of such conflicts, then they should come up with solution, which is more convenient for everyone. It is important to understand that this situation will badly affect all the students. If students are considered a team or group, then the team’s performance will remain on hold for sometimes. If students will give that wrong exam, they all may fail the exam, because they have not learnt in detail about chapter 4 to prepare for an exam. It shows that how conflict can effect individuals and teams.

The things can be difficult due to conflicts for an organization because it can have multiple effects, but the good things for managers and supervisors is that there are various techniques, which they can use to resolve conflicts, or at least minimize their bad effects. At any workplace, conflicts can happen between coworkers and people, but the real asset is to have some techniques applied to deal with those conflicts, otherwise things can be damaging for the individuals, teams and organizations itself. The Thomas-Kilmann Conflict Mode Instrument (TKI) is one of the best techniques, which managers can use to resolve any conflict or mitigate its effects. This technique talks about two behaviors, one is assertiveness, and the other is cooperation. Assertiveness means having desire just to satisfy one’s own needs, and cooperation asks for satisfying the needs that other persons have (kilmanndiagnostics.com, 2018)

The first technique in this regard that manager can use is Bargaining, which means that it will show the behavior of cooperation, and both parties will try to find a middle ground so that both can move on with things. The other technique is to use dominating term. This technique is more assertive in nature as involved parties fight and competes to get benefits for their own self, rather finding a better solution. Such technique is not viable for managers to use. The best technique for manager to use is problem solving technique. This technique is more near to the behavior of cooperation. This technique will allow the manager and other party to find a best possible solution for their conflict and for the teacher-students issue mentioned above; this technique is more considerable. There is one more technique called ignoring and avoiding, which is assertive and uncooperative. And one last technique for managers to use is obliging. This is neither too cooperative nor too assertive in nature; it can work to find a solution, where both parties may compromise with the situations in the end. It is important for conflict resolution to review these techniques, and apply one, which is more suitable in a given situation without increasing the mess.

It is a fact that a positive and friendly atmosphere can be instrumental for a manager to deal with conflicts, especially minimizing their adverse effects on the individuals as well as organizations. It is important for a manager to develop an essence of harmony at his/her workplace so that things remain calm most of the time. First of all, a manager must build trust and good relationship with his subordinates so that both can understand each other issues, and look for solution on collective basis. The communication happens to be the most crucial thing in developing a positive atmosphere. The manager should ensure that he/she goes with effective communication so that information is conveyed successfully with positive body language and having ability to listen to feedback more carefully. It is also important for manger to allow others to express their opinions and any fears so that relevant solutions can be found. It means that a manager should have active listening skills to develop a good work environment, which promotes harmony and respect for everyone. The manager should encourage regular team meetings, feedback sessions, and have a strategy to give rewards on regular basis. The issues can arise between people because of mistrust and misunderstanding, so a manager should develop team building essence and conduct more team building activities. This is how a manager can easily develop a positive work environment, where conflicts may arise with low average and lower effects.

Understanding What is Performance Management