Is Fran Bound By The Written Agreement With Marco?

The situation is that Fran appointed her brother to work with her indirectly assist her in her chocolate factory. Fran chocolate factory is very much famous and as well as very much liked the taste of its chocolate by the kids. The response of its chocolate taste is very much good because they are going to be distributed by her in the gourmet. As gourmet is one of most renowned bakery and it is very much trusted by the people in terms of doing shopping with it because they sell the products at low prices as well as the quality they give are exceptional as well as they offered some discounts most of the time to especially kids so that they like to take things from them.

Fran wants to expand her business of chocolates so she asked her brother to join her in her factory so that she can trust the person in her absence. Fran’s brother Marco was a van driver because he was going to meet his regular needs with the earnings of this van driving.  He when offered by her sister then he agreed to work with her but he tried to work with her according to proper terms and conditions. He consulted a lawyer that has prepared an agreement in this situation. Both after reading all terms and conditions have signed the contract. The main law was that Marco wanted the security of its Van maintenance because he will deliver the goods to other retailers. That why he made an agreement. 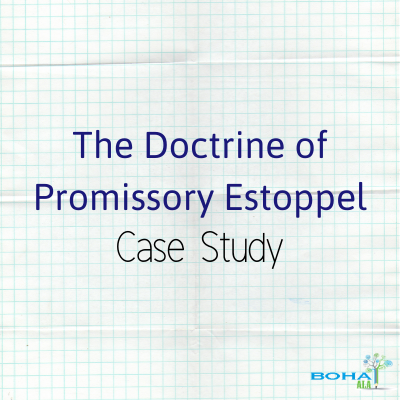 Right after the next day Fan cancelled the agreement by saying this that he is going to make Jane her niece as her partner in her chocolate shop. She refused to work with Marco, Marco then sued at her that she refused right after doing the contract. Therefore according to the law, Fan was charged by the fine in terms of breaching the agreement.  She has to give fine to her brother Marco because Marco cancelled the order of that retailer’s stores with which he was going to work in order to take their goods from one place to another breech cancellation causes him a great loss which Fan must compensate by giving the fine.

Does The Doctrine of Promissory Estoppel Apply To Fran And Octavia?

Fran was succeeding in terms of expanding her chocolate pieces among the distributors other than gourmet. Her taste was liked by kids very much. As kids are very much fond of chocolates but they do not eat all type of chocolates the taste which they liked the most are that which are plain as well as which have more sweet in them. A young kid likes nuts and beans in the chocolate because they like unique tastes in the chocolates.

Sometimes when kids taste something different they do not like it at the start but later they will like it if their taste suits you the best. Chocolates are liked by every person’s even old ages people also like to have it as an appetizer or sweet after a meal. Fran’s chocolates are very much delicious as well as they are very much common for treats as well. Fran wanted another big room for the chocolates because they are expanding their business as well as there is limited room in this field for this chocolate storage so that she is in search of a room or warehouse where she can save her chocolate stock in a bulk of amount because they are going to be sale on a high rate of interest by the people.

She once walking by the side of the road once she passed by the way she saw a person named Octavia who is going to sell it one of the apartment so she talked to her after visiting the house. She agreed to take it on lease and assigned to him an agreement but she suggests that she wanted a fan it this room’s kitchen. So Octavia agreed and called an electrician in terms of fixing the fan in the kitchen. But suddenly Fran once again refused to take his warehouse and breached the agreement once again. Therefore according to the law, Fran was charger by a heavy fine in order to breach the promise not which she made with the Octavia in order to not give him lease amount in order to take his warehouse for storing her chocolates. So she is a criminal according to the law but she has to be compensated the fine in terms of being cleared in the eyes of the law. (Legalservicesindia.com, 2018)

Is Dante Bound By The Contract With Fran?

Fran the planned to advertise her chocolates in different states and other retailers because it is very much important to advertise your business so that they can be expanded and business person can get the maximum profit out of it. She tried to start from the beginning and in order to get the high fame in the market she decided to hire a person for this work. She advertises of this and interviewed many of the persons among which she selected Dante because she finds him excellent in sales and promotion skills because this task is going to be tough because results should be increased in the sale and profit of the chocolates.

Dante was selected after a proper contract that he will not be able to promote anything else products as well as he is not allowed to do this business in its personal terms by getting a separately personal commission in terms of earning more money. Donate was assigned only in terms of promoting Fran’s chocolates other than few gourmet stores. Donate was after six months accused of theft that he was selling the chocolates in its personal ways because they are counted every day and it was analyzed by the warehouse manager so that it was caught red-handed because it is a crime so Donate was arrested on breaching the agreement and as well as it is being charged a heavy amount of fine which was more than the amount of the profit which he gets from extra earning way.

According to the law, this is actually a crime so it should be punished and must be charged by the heavy fine because they are going to be taken by the courts and by the company as well which hires that person in order to do the job for their behalf. (Dictionary law.com, 2018)

Is Arjun Entitled To The Month’s Supply Of Free Chocolates?

The Donate on his behalf was selling the chocolates to their loved ones for free because he knows some of his relatives who love chocolates very much but they are not able to take such delicious chocolates in order to eat for the free. Fran noticed this on her warehouse manager so she checked and kicked out the Donate. Once a person came in the Fran store and asked for his free stock he then known by Fran and Fran hired another person by his help more honest for this post.