Other forms of academic dishonesty include collusion, conspiracy, cheating, a duplicate submission, bribing tutors to obtain good grades, fabrication, copying another person’s work and submitting it as your own and misrepresentation. 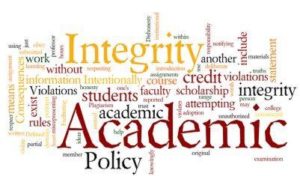 The forms of academic dishonesty which surprised me include misrepresentation, copying another person’s work without proper citation, sharing an intellectual property of the tutor or any institution without their approval, and duplicate submission. Besides, collusion during examinations surprised me. It shows lack of integrity among students.

If the student denies being involved in academic dishonesty, he or she will be given an opportunity to present the available evidence before the Student Conduct Committee. The evidence will then be scrutinized and the final decision communicated to the student by the Dean of Students or a designee.

Some of the sanctions of applicable to students who have committed academic dishonesty include academic sanction such as revocation of the degree, expulsion, and adjustment of the grade.

Cheating can allow a student to obtain good grades that do not reflect his or her efforts. On the other hand, a student who commits academic dishonesty can be expelled from school. Besides, the degree can be revoked. Therefore, students should embrace honesty at all costs.