3D printing has been there for the longest time, however, it has evolved from arts to fu 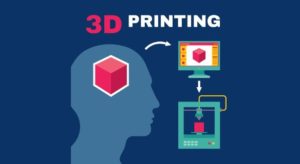 nctional use. In that, it has expanded its use from making prototypes of products and has found its use in the medical field. The medical device industry has found 3D printing quite useful in coming up with medical devices such as the hearing aids. It uses the concepts of a normal printer by applying layer after layer using specific materials to come up with a 3D model of something. For example, when coming up with a 3D model of an ear, a scanned image is placed on the 3D printer and by using human cells and a bio jell it comes up with a model of an ear. The use of human cells is for the sole reason of avoiding rejection. A great percentage of the medical device industry has potential in exploring the 3D printing section, as it observes economies of scale and it is cost effective. The 3D printer, can produce a large number of medical devices reducing on cost of production and observing the economies of scale. The company GROM is a startup business whose goal is to create an interface where parties involved in the scanning process and the creation of the medical devices can interact and hence, supply of information is made much easier between both parties.

The company GROM manages the design and production process in various ways, first of, it focuses mainly of optimizing customization, it does not necessarily come up with a new product, for that is a risky in the medical field, but rather helps in making sure the end product is of quality. “Yeah. So, for us, how it works is that we essentially work with existing medical device companies. So, for example, so, for us the reason is that this we’re just optimizing, and eventually, we will be replaced but what you find is well in the medical space and you need a lot of certificates and a sort of approvals for you to sell any–for example a brace or medical support for different joints, so, as a result, you do not really want to bring individual new product to the market, you rather optimizing the experience essentially. And for the moment, we help existing companies to optimize the customization process because it’s what we’re good at because we build software,” says the interviewee.

GROM Company is able to manage its design process because it builds the software mentions the interviewee, “because we build software. They claim that they are good at what they do because the build the software meaning they are really good at the design process. “from our side, we believe that building a software product without having that knowledge about–and partnerships to build an actual product you want to use, it’s sort of a waste of money because at the end of the day you want people to use your 3D printed objects and not just a gadget or some sort of trinket or something,” says the interviewee, to mean that they manage their design process by focusing on quality and coming up with a software that they have knowledge about.

When I comes to managing their manufacturing the company has chosen to do their manufacturing in china. Where they do their will observe cost effectiveness and labor cost is cheaper. “All right, there, I think there two things you’re saying here, number one, China, because of its relatively cheap labor, you can do post processing and so that rules out sort of Hong Kong as a base for doing the printing for your customized needs, he says.”  There special relationship with people has also attributed to the fast manufacturing that they do in china the interviewee mentions, “ So, 14 plus 1, 4. But we are a little bit faster because we have a special relationship with these people and with been a lot for a while but generally speaking, for example, if you look a company like Shape ways…. for example which is a huge company that is in China if look a post-processed parts, right? So, not just something common change another printer, it’s usually two to three weeks.”

GROM has worked with several countries and china is one of those companies. They have faced several challenges when working with the Chinese manufacturing companies especially in the sector of 3D printing. The interviewee mentioned that the Chinese manufacturing company are focused on mass production rather than quality. “So, our experience in China has been so far, that first of all, the Chinese current infrastructure of manufacturing is obviously very much geared towards mass manufacturing. So, you make a hundred thousand parts, maybe ten thousand or a thousand some of them are dysfunctional, and you throw them away but then again, 999,999 parts that are fine. What you find especially in the context of 3D printing that just completely flips process upside down where you need to be sure or if you make a one off product for an individual customer, every single part has to be perfect. So, what we found is that sort of culture of High-volume, just high-volume, low-quality culture, I imagine…,” he said.  He continued to explain that, a product from the 3D printing required post processing of the product that is of the required level. This means extra work and time wastage, checking if the products are in order. “So, when working in China, we thought that–especially like with 3D printing, there’s quite a high level of post processing involved. So, you’re getting something into a printer out of a printer is not a hard part, the hard part actually is taking out the printer and then, post-processing it to a level that is, in fact, a consumer grade product.”

The second challenge that GROM faces is lack of responsibility, or rather lack of a chance to enforce responsibility. The interviewee stated that, being a foreigner in another country, it is impossible to force a certain level of responsibility. The Chinese manufacturers are accustomed to mass production and it is hard to change what they are used to. “So, we found getting that stability in China was very hard because of that volume culture, as you said. And also, I would say to some extent, still sort of lack of responsibility, I would say, I mean, especially as a–as a foreigner operating in China, there is a limit to the responsibility that you can expect to enforce a particular level of quality with your producers. So, I think that’s very tricky you that is something is not really good, but you don’t already have, like a sort of a return policy where you say, “Okay. Do it again” every time you had to hope that they will do it again because they can say no or walk out on the deal because you are not a local Chinese entity with all the — I guess – the perks that come with that. So, I think that is the second challenge for sure.  And with 3D printing, the–doesn’t make sense? Before I….”

The interviewee mentions of another challenge is the 3D printing companies selling the IP’s. “: I wanted to add one more thing about the whole China issue, I think that’s also IP. Obviously, with 3D printing, I mean, I have to experience the past as well that we have designs working with a 3D printing company and all of a sudden, we found the 3D printing companies selling it themselves. So, I think IP is definitely a challenge and was interesting actually that I was at HKPC, like, the Hong Kong Productivity Council and quite recently and they said actually that they have maintained a certain level of customer-based like in 3D printing as well, because those companies are using them for prototyping, they don’t want to go to China because they don’t know where they 3D files will end up. So I think that is the definitely something I can say from personal experience that is has happened, and that is definitely with 3D printing in China, is some sort of a hazard, especially for complex 3D printing objects that are on a need to know basis, and there is some kind of risk,” says the interviewee.

Conclusively, GROM is a startup company that is involved with the 3D printing files, it comes up with the software involved. The company has managed to design and manufacture 3D printers because of its focus on quality and partnering with other manufacturing companies that are good at what they do and produce quality products. In addition, the company has managed to work with Chinese companies and has liked the experience and sees a lot of potential in the 3D printing sector growing in China. Working with china has been beneficial to the company in that they have it focused on cost effectiveness. Even though they focus on mass manufacturing and the company has to spend on labor when it comes to post processing, it is cheaper compared to other countries. GROM Company has faced some challenges when it comes to doing business in china, one of them being that some companies are selling IP, the mass manufacturing habit of the Chinese companies is a big challenge because quality is not much considered and the lack of a chance or ability to enforce responsibility to the Chinese companies is also a challenge. Being that the company is in a foreign company it difficult to enforce responsibility and if forced it may lead to dire consequences that may be a loss to GROM. As mentioned, 3D printing has evolved from arts to functional purpose. Coming up with medical devices using the 3D printers is a functional and beneficial use a field that the GROM Company has involved itself with.