There are many surface related analytical and experimentally available techniques which are helpful in characterizing the materials. They perform rapid solving of surface-related problems with chemical composition and physical structure characterization delivered by experts using the latest techniques. Some of the surface related techniques are listed as:

Oxide thickness is commonly measured by ellipsometry [1] but as film thicknesses is scaled down to several atomic layers, surface analytical techniques such as XPS become applicable tools to quantify these films [2]. An XPS measurement offers the additional advantage of providing information such as surface contamination and chemical composition of the film.

X-ray Photoelectron Spectroscopy (XPS) technique offers several key features which makes it ideal for structural and morphological characterization of ultra-thin oxide films. The relatively low kinetic energy of photoelectrons (< 1.5 keV) makes XPS inherently surface sensitive in the range (1-10 nm). Secondly, the energy of the photoelectron is not only characteristic of the atom from which it was ejected, but also in many cases is characteristic of the oxidation state of the atom (as an example the electrons emitted from 2p3/2 shell in SiO2 are present approximately 4 eV higher in binding energy than electrons from the same shell originating from Si0 (bulk Si). In the third place the XPS has the advantage that is straightforward to quantify through the use of relative sensitivity factors that are largely independent of the matrix.

The XPS recorded spectra were obtained using SPECS XPS spectrometer based on Phoibus analyser with monochromatic X-rays emitted by an anti-cathode of Al (1486.7 eV). The complex system of SPECS spectrometer presented in Fig.1.13: allows the ARXPS analysis, UPS and STM as surface investigation techniques [3]. 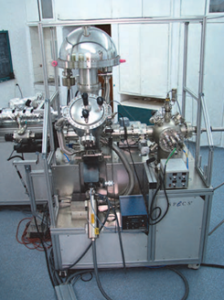 A hemispherical analyzer was operated in constant energy mode with a pass energy of 5 eV giving an energy resolution of 0.4 eV, which was established as FWHM (full-width half maximum) of the Ag 3d5/2 peak. The analysis chamber was maintained in ultra-high vacuum conditions (~ 10-9 torr). As a standard practice in some XPS studies the C (1s) line (285 eV) corresponding to the C-C line bond had been used as reference Binding Energy (BE) [5]. The recorded XPS spectra were processed using Spectral Data Processor v 2.3 (SDP) software. In its structure the SDP soft uses the DE convolution of a XPS line as a specific ratio between Lorentz Ian and Gaussian line shape and these characteristics ensures a good fit of experimental data. The explored depth of surface layers by XPS technique can be adjusted by the variation of θ angle.

Angle resolved X-ray Photoelectron Spectroscopy (ARXPS) is related to a XPS analysis of recorded spectra on the same surface at different detection angles θ of photoelectrons measured to the normal at the surface. The analysis chamber is maintained at ultra-high vacuum (~ 10-9 torr) and the take-off-angle (TOA) was defined in accord to ASTM document E 673-03 related to standard terminology related to surface analysis that describes TOA as the angle at which particles leave a specimen relative to the plane of specimen surface; it is worth to mention that our experimental measured angle is congruent with TOA as angles with correspondingly perpendicular sides. For a detection angle θ, the depth λ from where it proceeds the XPS signal is given by the projection of photoelectrons pass λm (the maximum escape depth) on the detection direction:

In Fig.1.14: is presented the TOA angle considered in the equation for oxide thickness evaluation as presented in [5- 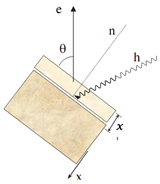 X-ray Photoelectron Spectroscopy (XPS) which is also recognized as Electron Spectroscopy for Chemical Analysis (ESCA) is an extensively castoff practice to examine the chemical arrangement of outer surface. The photoelectric procedure with is (once a light of convinced frequency poses on the exterior of a metal, electrons will engross the energy. If incident light energy is superior than the work function of the metal, then the photo electrons will be released and the additional energy is transformed to the kinetic energy of electron) with auger electron emission is the elementary circumstantial in this ground revealed by the Figure 1.15:

Figure 1.15: A representation of photoelectric effect and auger electron emission.

The XPS instrument measures the kinetic energy of all collected electrons.  The electron signal includes contributions from both photoelectron and Auger electron lines.

We have: BE= Electron Binding Energy

Here remember that energies of photoelectrons are dependent on photon energy. While for the case of Auger electrons they are not dependent.

If XPS spectra were offered on a kinetic energy measure, one would want to identify the X-ray source energy used to accumulate the data with the intention of to associate the chemical states in the sample with data unruffled using alternative source. The photoelectron’s binding energy will be founded on the element’s final-state configuration (see Figure 1.16 🙂

Figure 1.16: A band diagram illustrating the electron transfer which changes the electronic configuration.

The earliest work on quantum dot sensitized solar cells (QDSSCs) has been reported by Weller’s group [6]. These types of solar cells are alternative to dye sensitized solar cells (DSSCs) [7]. The diﬀerence between QDSSCs and DSSCs lies in the sensitizer employed to harvest the sun light. In the case of DSSCs this is an organic dye molecule or metal–organic complex whereas in the case of QDSSCs it is an inorganic semiconductor material QDs. Fig. 1.17 shows a scheme of quantum dot sensitized solar cell and its principle of operation. Briefly the working principle of QDSSCs is as follows: Upon illumination of the photovoltaic cell the QDs sensitizer attached on the TiO2 film absorb incident light. This causes excitation of an electron in QDs from the valence band to the conduction band. In this way the excited electron leave behind a positive hole. 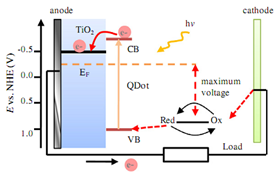 This system of energy is used in architecture and design of the building to control the heating and the ventilation in solar designs and passive assets. Photovoltaic: The Photovoltaic technology or of picovoltio uses the solar cells or the solar orders photovoltaic to turn energy of the sun electricity.

It continues being all the chemical agent and radioactive by-products of the contamination of the thermonuclear reactions in the sun behind, whereas only pure the radiating energy reaches the Earth. The energy that reaches the Earth is incredible.  By a calculation, 30 days of sun that press the Earth have the equivalent one in energy of the total of fossil of all the planet, used and unusual fuels.

A collector of the level plate is used to absorb the energy of sun to warm up the water. The water circulates through system closed due to the currents of the convection. The tanks of the hot water are used like storage [10].

We can also use the solar silicon cell as he is nontoxic, abundant, and relatively cheap and have mature infrastructure of the industry of the computer. Using this we can obtain many advantages like