Willowbrook School is a small private school that has retained your services as a systems analyst to assist in the development of a new information system for the school’s administrative needs.

The Willowbrook School staff accepted your interface, output, input, and data designs. Now you will determine the system architecture, which translates the logical design of an information system into a physical blueprint.

Tasks 2: Based on your chosen architecture from task 1, what physical and logical network topology would you recommend for Willowbrook School?

Tasks 3: Now that you have developed a systems architecture and physical topology for the network, make a list of the hardware that will be required for Willowbrook. Review the background information in previous chapters to develop your list.

The systems design has been completed and design specifications approved. You are now beginning the implementation phase of the SDLC, which includes application development, installation, and evaluation. One of the parents at Willowbrook has extensive experience with the database package as a Database Administrator at a local company, and has committed to providing 15 hours per week working with you to develop and test the project. You should assume that the server, switch, and workstations discussed in Part A have been purchased, installed, and networked.

Tasks 5: Choose an application development methodology for the Willowbrook system. Discuss the advantages and disadvantages of structured, object oriented, and agile development.

Task 7: Identify the specific groups of people who need training on the new system. For each group, describe the type of training you would recommend and list the topics you would cover.

Design of the System Architecture

The Willowbrook School seeks to develop a new information system in order to handle the requirements of the institution as well as the students and staff. The system should allow students and staff to access the information resources of the institution as well as allow the management of information and data. In light of these requirements, a client server architecture favors this form of systems in a significant manner. Though a file-server architecture would also work for the particular case, it will limit the flexibility and the scalability of the system. Furthermore, it is important to note that there are many data transmission and storage required due to the expected use of the system by both the students as well as the staff members.

In a client-server system, most of the processing and data access control processing is performed by the server (Zhang, 2013). The clients send requests to the server to access specified information from the server. The server then processes the request and either grants access to or denies access to the file based on the set configurations. In a client-server architecture, the files are stored in a central location which makes the administration of management operations easy for the information technology specialists. Secondly, the network peripherals are controlled from a central location. This centralization of both resources as well as data makes the administration and administration operations easy to control.

Based on the discussion and explanation provided by Oluwatosin (2014), the following diagram demonstrates a client-server system architecture. The clients can only access the data and the network resources through the server. The server acts as an interface between the client applications and the main data storage. 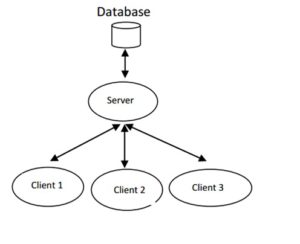 In comparison to the file server system, client server offers a significantly high performance in processing and replying to the requests by the client applications. According to Lin (2011), the clients request for services from the server which then processes the data and the request and then sends back the results of the processing work back to the clients who requested for services. High performance systems are required in the servers and as such, the client machines required may not be as powerful and costly as the servers. In comparison, processing operations are performed in the user machines in a file server system. This means that the system becomes more and more expensive as more and more users need to connect to the system.

Hardware requirements of the System

As explained in the introduction, the information system of Willowbrook School will follow the client-server approach and the hybrid topologies for the subnetworks. Another main consideration that needs to be taken care of during the design is the issue of network security. According to the research conducted by Prabakar, Marikkannan & Karthik (2012) though network systems provide benefits and advantages such as the freedom of mobility and enabling users to connect to devices and systems far away, they also bring in more threats to the companies than the traditional models of communication. As such, network security is essential in every network system. As such, the following are the hardware requirements of the proposed network system:

Three firewall systems: As explained above, security of the network system is essential. A firewall is a hardware device used to reinforce security policies (Taluja & Dua, 2012). It does this by filtering content into or out of the organizational network based on the content of the traffic.  These firewalls will be used in the implementation of a dual-firewall demilitarized zone for the security of the network system.

Switches: Based on the total number of client devices required in each department, switches that effectively connect all the devices on the department. Each department will be considered as a subnetwork and thus will need at least one switch.

Access point: Being an institution, most of the students attend classes with handheld devices such as tablets, laptops and smart phones. The Access point will be used to connect these devices through a wireless connection.

Servers: As explained above, servers services the requests from the clients. Some of the main servers required in the network include a database server, email servers, HTTP servers and others as may be required by the institution.

Client computers: These are the computer systems that are used by the staff and students at the company. Computers with a minimum configurations of 1.6 GHz processors, 2GB random access memory and a 40 GB hard drive will be sufficient for the institution.

This is a system design specification that details on the network system for the Willowbrook School to be used to connect the staff members as well as the students to the institution’s resources. The network is to be designed following the client-server architecture with each department forming a subnetwork of the entire network system.

Though a software system for the administration of the network system can be developed from the beginning, this will not be cost-efficient. Today, the market has many cheap off-the-shelf software systems for the management of network.  The most appropriate for this network system is the PRTG Network Management Software that offers services for monitoring the bandwidth, the availability of the different resources, performance and load monitoring (Paessler AG, 2016). The interface will be developed by NetBeans Java software development platform.

The system would be implemented as a secure, reliable and accessible system for all the authorized users.

Selection and Justification of Methodology

There are numerous different software development methodologies that are applicable in the development of a software systems. However, each of these development methodologies is applicable and most suitable for specified problems. As it was earlier explained, the institution’s system can be broken down into several sub-systems and phases. As such, the iterative and incremental methodology is the most suitable for this project. This methodology seeks to develop the application one step at a time in the form of an expanding model (Duggana & Thachenkaryb, 2004). Basic on the initial instructions and specifications of the project, an initial model of the application is developed. After its evaluation, the basic model is expanded until the final system is completed. Unlike prototyping, the first prototype of the system is not discarded. The feedback of the project owner is received after each of the iteration meaning that the system development follows the required direction in meeting the objectives of the system developer. The primary advantage of this methodology is that it mainly emphasizes on the design rather than the documentation and deviations from the main research objectives can be depicted earlier in the development phase (Despa, 2014).

Verification and validation are some of the main phases in system design and implementation. According to Sommerville (2007), validation answers the question of whether the right product is being developed while verification answers the question of whether the system is being developed in the right manner. To ensure validation and verification, two types of testing shall be conducted including system testing and release testing. Under system testing, the developers will conduct performance testing to evaluate the performance of the system, unit testing to evaluate the operations of each component and integration testing to ensure that the components operate as required when integrated. Under release testing, the developers will conduct requirement-based testing to ensure all the requirements have been met.

The other group is the group of institution’s staff members. The staff members in the institution will not only be required to insert data into the system but will also be responsible for managing the data stored in the system. As such, they will require training to be in a good position to carry out their operations in an effective and efficient manner.

Finally, the last group that will require to be trained is the group of information technology specialists and the members of the IT department in the institutions. As was explained, these are the main administrators in the system. They can do all the operations that other people can perform.

There are mainly four different types of changeover techniques that can be applied in conversion of one information system to another. These include the direct changeover, pilot changeover, phased changeover and the parallel changeover. Each of these techniques has its advantages and disadvantages and is suitable for some instances and not in others. The direct cutover is the direct approach in which the services of the old system are directly cut and taken over by the new system (Mallach, 2009). This approach is significantly risky and may involve losses in data. In parallel changeover, the two systems are allowed to execute and be used until the new system is verified to be operating as required, after which the old system is eliminated. In pilot changeover, the new system is allowed to operate at a specified section of the organization while the old system continues operation in the other sections of the organization (Mallach, 2009). After the system proves successful in the pilot site, in is implemented fully in the rest of the organization. As it was explained earlier, this is a new system that is expected to replace the existing system. Failure of correct operation of the new system can have substantial impacts to the institution. As such, parallel changeover is the most appropriate for this system. The two systems are allowed to operate until the new system is verified to be operating correctly after which the old system is removed from operation.