Who Gets the Engagement Ring if the Wedding is Called Off

When according to the law an engagement is broken off between a couple then the ring who will keep depends on the laws of the state. Laws vary from state to state. Some states has the law that the ring should be returned back to each other as the girl give the ring back to boy who has gifted her the ring and the boy should return that ring to the girl which she also gifted him. Some states have the law that both the person’s boy and girl should or can keep to them. This law should be implemented according to the state and you must consult with an attorney of that state who can guide you according to the laws of that state so that a complete legal process should be processed by the persons. (Kimberly, 2018) 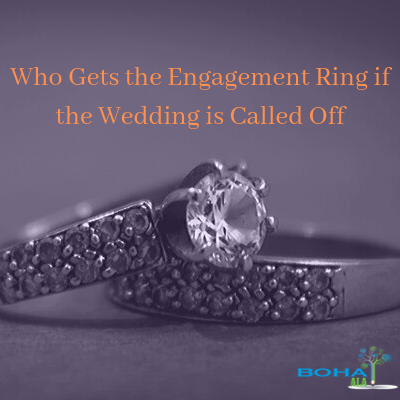 Wedding is mutual consultant decision of two people who spend their life together with each other. They promised each other in terms of keeping each happy and stays with each other honestly. They exchange gifts with each other, which is a sign of increasing love and understanding with each other. If there comes a situation then the couple after marriage can get divorce. If a couple get divorce then the question raise that who will keep the wedding gifts? This issue is a big issue according to the states laws because there are states made by every state according to the wedding. This varies with the law of states. Some states have the law that both the parties return gifts to each other whereas some law states that they can keep gifts to them if they want to keep. (Endershot, 2016)