Home > Projects/Reports > What is Quantitative Easing

What is Quantitative Easing

Quantitative easing is the process whereby the government generates money to purchase government assets and bonds with the aim of increasing liquidity. This is a recent practice mostly by big economies who try to increase the amount of currency in circulation to stabilize the effects of inflation. While this practice is achieving a lot of attention, economists still debate on the legitimacy of Quantitative Easing (QE) both to the developed and developing economies. Much of this debate relates to the quantity of currency being exchanged in the country, the value of the currency and its monetary impact both to the poor and the rich. Most governments feel that asset purchases provides additional stimulus to nominal spending and this is important aspect in reducing the level of inflation in a country. While this may be true, economist are still skeptical on the effects of such a move on asset prices, expectation of the public and the availability of credit for a stable economy. The uncertainty and the pace with which QE is picking up is making some economies to rethink the effectiveness of such a move to determine exhaustively its pros and cons.

The main aim of quantitative easing is to inject money into the economy to stabilize nominal spending by purchasing assets from private or public sector. When the government uses their new central bank currency to purchase resources, it boosts the quantity of central bank currency held by financial institutions which in turn boost the sum of deposits retained by firms and households (Benford 3). The increase in the amount of assets held by firms and households increases spending which is healthy for a stable economic system. Since central bank is the sole supplier of the currency in circulation, it takes money in the form of reserve balances held by banks to make payments between different banks. Benford argues that such a scenario was witnessed in in England in order to reduce the rate of inflation to protect consumers from economic crisis and it succeeded to some extent. According to Benford, the bank may decide to generate this money electronically simply by increasing the balances on the reserve account so that it credits the bank reserve account when the bank purchases an asset. 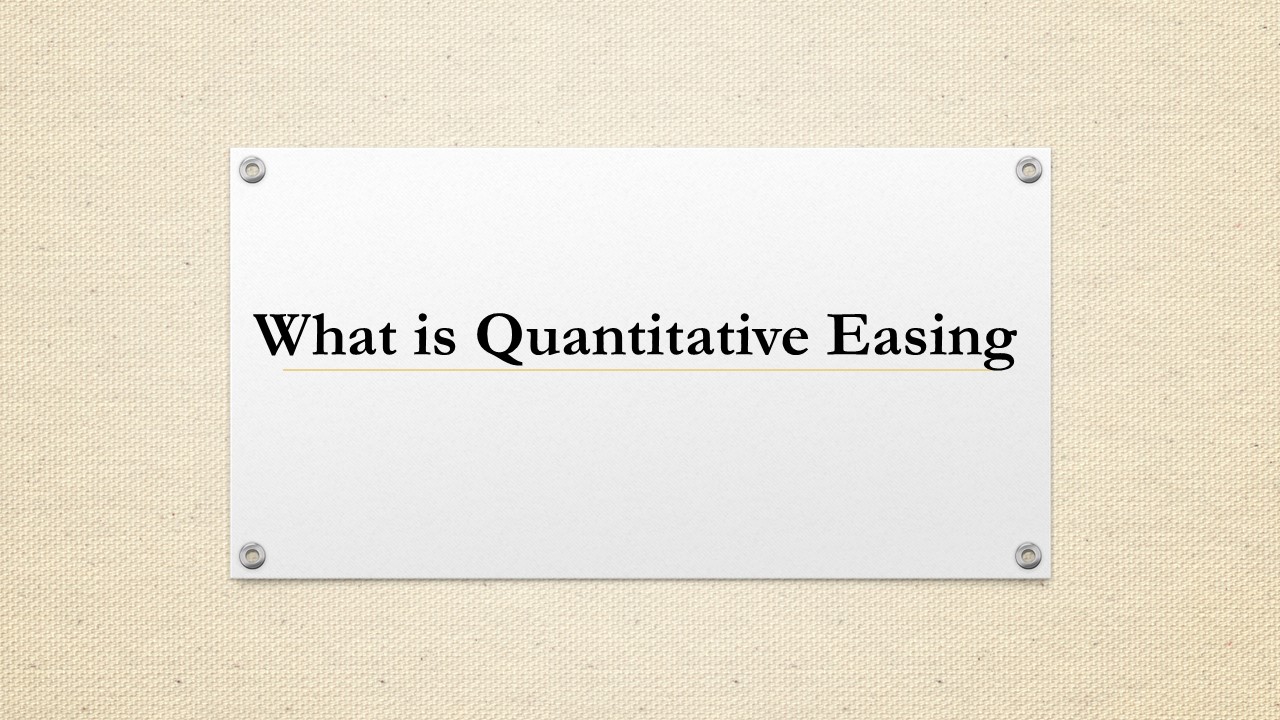 The central bank can also decide to purchase asset from a non banking institution by paying the amount directly via the seller’s bank thereby crediting the reserve account of the seller’s bank (Berger & Weber 36). By so doing, the asset of central bank increases which consequently increases the assets of commercial banks and the non bank institutions concerned. This ultimately leads to an increase in assets prices and spending and consequently reduces the rate of inflation to desired levels (Berger &Weber 37). Economists argue that this is a perfect method of expansion of supply of central bank money without increasing the rate of inflation in an economy (Benford 3). Controlling inflation is not easy due to pressure from financial hawks who are always interested in seeing high interest rates (Krugman).

Since quantitative easing involves large amounts of currency, there needs to be set properties to procure for it to be successful in the short term. Most of the purchases go to public organizations with private organization receiving less purchase with the aim of improving the conditions of the corporate credit. The injection of government money into the economy is helpful in increasing the liquidity in return for the assets which helps to improve the balance sheet of the private sector households and firms (Berger &Weber 37). Since money is highly liquid, its injection into the economy increases the buying of goods and services hence is a good manipulating tool for inflation.

Purchase of assets by the government increases the prices of assets reducing the cost of borrowing from household and companies thus resulting to higher consumption and investment spending (Benford 3). When companies have cheaper access to capital, the level of output increases and the prospects for employment also increases which is healthy to an economy. The purchase of assets by the government is also effective in boosting expectations due to the awareness that inflation is controlled. This high expectation encourages spending and price of commodities which has a direct impact on inflation. The public good perception on the economy is likely to improve spending due to increased confidence and this is healthy for economic development. QE increases the central bank assets over time and this is an indicator of economic growth over a period of time. The graph below represents the increase of assets in the Bank of Japan who have been practicing QE for significant period of time (Reinhart, 8). 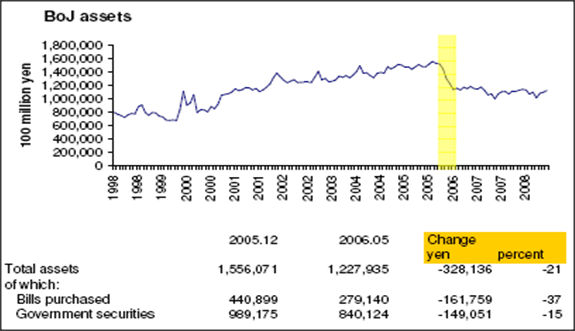 Efforts by most government to infuse liquidity sometimes come with negative consequences which are difficult to avoid and therefore sometimes hurts. Too much liquidity inflow from the government strains the lending channels of commercial banks which in turn renders them insufficient. This is partly because most of these unconventional measures come at a time when most banks are not ready for such rigorous exercise and therefore only mature banks may be able to undertake such an exercise. Central banks have a limited role in meeting the needs of consumers and therefore to some extent, infusing liquidity is seen as a means of stabilizing commercial banks as opposed to the general public (Klyuev, Imus & Srinivasan 17).  The political nature of most economies has rendered services unconventional services like quantitative easing to take up slowly. This is because they need to build political consensus before embarking on such projects for fear of falling into political oblivion. The central banks can also be subjected to such a practice before they do thorough research on the outcomes to determine the outcomes and such may negatively affect the economy of a country (Klyuev, Imus & Srinivasan 19).

The uncertainty over the right dosage is a problem can be a problem while trying to infuse liquidity since the right amounts of figures are always debatable. The first step in quantitative easing is always to determine the appropriate size of monetary impulse so that it’s not low or high so that it becomes effective (Meir 19). The timing of such a move can also be challenging and is still debatable among economist due to high risk involved. Some feels that it should be a precautionary measure before a financial problem while others feel that it should only be applied during economic crisis. This discussion has also extended to the exit of such a move which must be done in appropriate time to avoid nullifying the gains which have been made. The exit decision also requires careful determination of the speed and sequence to prevent the possibility of the project becoming wastage (Taylor).

Quantitative easing enables the central bank to absorb the financial risk initially held by the private sector by improving access to credit. This therefore makes the government vulnerable to financial crisis incase the project works unexpectedly (Meir 21). According to Andre, the government risk loosing huge amounts of capital is the assets acquired loose their value over time. This is likely possible when the government buys a lot of assets from private firms who carry the market risk (Meir 22). Meir also argues that capital loses by the central bank can seriously undermine its abilities and independence thus adversely affect its capacity to tackle inflation carefully.

Since most of the economies are political in nature, the ability of the government to roll out such huge financial projects requires a lot of political compromises for it to commence. Such compromise always take time and may not be possible to tame inflation in short run successfully because it may be late. The failure of such a project also comes with great political costs which can adversely affect the working of current government. The political sensitivity of such issues always ends in parliamentary duel which would erode the legitimacy of the current government (Meir 21).

Holders of government bonds have greatly gained from QE who have seen a rise in their liquidity and a rise in prices of bonds thereby gaining highly. Increase in money supply is known to reduce the interest rates which in turn increase business activities thus stimulating economic growth. When this is achieved, deflation can be prevented and the levels of employment are also expected to rise (Hilsenrath and Mcgrane).

Quantitative easing can also adversely affect the independence of the central bank which would consequently undermine its ability to control the government debt management structure. Since central bank controls commercial firms, it should be careful not to overindulge in direct business with them lest it looses it independence and legitimacy. Quantitative easing may lead to currency wars among countries and this is not healthy for global economic stability. This is evidently by the complaints raised by china to U.S over the value of debt it she holds which is often lowered in value thanks to quantitative easing. Brazil is also on record in voicing concerns about quantitative easing lowering the value of currency hence making a country more competitive than countries that do not (Hanly). Hanly also argues that Quantitative easing can lead to the sale of discount bonds which are sold below market price in an attempt to boost liquidity and such attempt can lead to inflation.

Therefore the effect of global meltdown has enabled financial institutions to engage in unconventional monetary policies with both positive and negative consequences and thus should be monitored keenly. The scale and scope of such effects is different among several economies depending on various factors. QE is successful in stabilizing the financial conditions in the short run but the long term effects needs to be studied carefully. This is because despite QE being in operation for some time, the world still witness economic meltdown therefore its effectiveness is debatable.