Home > Projects/Reports > What is Philosophy

What is Philosophy explains that The understanding of philosophy had varied in relation to different views and ideas from great philosophers. From 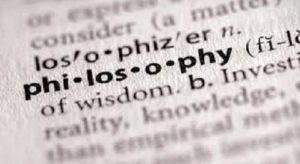 an angle, it may be weird, boring, or unsuitable despite the interest that can be foreseen. Basically, Philo means devotion or love in Greek, and Sophia implies wisdom. So in a very simple term, philosophers are those who are devoted to wisdom or those who love wisdom. But there’s more to philosophy. When we compare philosophy with science, we will draw out the fact that philosophy combines diverse disciplines together, which contain several interrelated sub-disciplines such as logic; that defines a study which makes us reason truths; value theory which aims at valuable things; metaphysics that is concerned basic questions as to what exists; and epistemology which is concerned with the facts of knowledge. (Korcz,).

Because of the different perspectives of various authors, I will be selecting five different authors in order to show what philosophy is in this paper.

First, Anselm declares his belief that God is “a being than which nothing can be conceived.”  (Anselm, p. 1) This statement had been regarded as Anselm’s ontological argument and a way to demonstrate and prove that God exists. Philosophy in this perspective becomes a logical position as the statement purports a self-contradiction to disprove that there are tendencies of the existence of a greatest possible being and therefore concludes that God truly exists. Anselm tries to refute fool who says in their heart that God does not exist (Psalms 14:1) and this fool is based on two features: his understanding of the claim that God actually exists and doesn’t believe the existence of God. (Anselm) His stand tries to show that this combination is not stable and anyone who thinks or believes the fact that God can be made to realize that God actually exist. However, the atheist is not making just any mistake, but his stand is internally inconsistent. This is the reason why this argument is called the ontological argument that is invalid because this reasoning apparently leads to false conclusions. Moreover, while he explains the distinction in his arguments, his depiction shows that it is one thing for him to understand the existence of an object, and another thing to understand it to exist. I selected this quote because it is a controversial issue to the author himself as he is seen to give a two sided with one direction of his concept about what he was trying to put forth.

Second, in a conversation between Socrate and Crito, Socrates says “. . . I only wish it were so, Crito, and that the many could do the greatest evil; for then they would also be able to do the greatest good—and what a fine thing this would be! But in reality they can do neither; for they cannot make a man either wise or foolish, and whatever result they produce is the result of chance.” This dialog between the elderly Athenian and Socrates is an example of an approach to philosophy. The statements are logical, and requires some in depth reasoning to depict the meanings of the conversation in relation to the problem at hand. Indeed, this dialog reflects the different circumstances that Socrates faced without being able to overcome them. This is the reason why more attention is placed on the reasons advanced by Socrates himself for the fact that he refuses to take the decision of escaping from the prison in order to save his life. He was in a circumstance where he could have been able to escape effortlessly, as much as his friends were urging him to take the step. This quote and many others from Socrate is a way he poured his heart to the evil men did against him. As a matter of fact, his quotes shows that he is not concerned with what anyone said to him, for he feels it is capable of neither any highest evil nor highest good. He postulates this, that it cannot make a man either wise or foolish. He was just not bothered about the idea of the majority. As much as Crito continues to convince Socrates about escaping, he keeps refuting it. (“CliffsNotes”) There was a time he asked if Socrates feared escaping and this could possibly lead to getting his friends in trouble, he admits this fear and still said it is not just that fear he has. Crito still continually tries to convince him of any assistance he could do, and even if he’s not capable of doing, there are friends who are ready to do it. I chose this quote to establish Socrates refusal for all helps and assistances despite the circumstances he found himself.

Third, Karl Marx says “Let the ruling classes tremble at a Communistic revolution. The proletarians have nothing to lose but their chains. They have a world to win.” The manifesto of the communist party delivered various quotes that shows the level of wisdom Karl Marx and Friedrich Engels put up. This quote chosen reflects the position of the Communists in relation to the various existing opposition parties in section 4. The manifesto concludes with this discourse pointing at the role played by the Communists  as they worked hand in hand with other parties. The aim of these Communists is to fight for the major plight of workers, although in the context based on the entire Communist movement. Thereby, creating an avenue for working with political parties that will send on the ends of Communism, even if they don’t have a choice than to work with the bourgeoisie. On the contrary, they continually instill into the working class to demonstrate a level of hostile antagonism existing between the bourgeoisie and the proletariat, as well as to help them obtain weapons which they will eventually use to overthrow the bourgeoisie. This made the Communists support all revolutionary movement put against the existing political and social order of things. This is what points to the last section which reveals the Communists political agenda. A final goal of a proletariat revolution and the getting rid of class antagonism and private property. Because their belief is based on how history must go through some stages. Also, the Communists’ strong theoretical foundations put them on a pedestal in which they can advocate and integrate predictions and observations in order to call on workers to unite someday, and promising them a better world in freedom. This quote is selected to explore the standardization of the Communists and how they were determined not to go against their said wills and words.

Fourth, Frederick Engels quotes “The slave frees himself when, of all the relations of private property, he abolishes only the relation of slavery and thereby becomes a proletarian; the proletarian can free himself only by abolishing private property in general.” This is a quote that came from the principle of Communism which is associated with some critiques from Karl Marx. (Blunden, 2005) The proletariat came to be as a class in the society living entirely from its labor sale and does not gain profit from any sort of capital; their life and death, weal and woe, and sole existence are based on the demand for labor. They are typically the 19th century working class. This set of people has been regarded as being poor and strictly the working classes that originated during the industrial revolution in England precipitated from the discovery of mechanical loom, steam engine, various spinning machines, and many other mechanical devices. In all this, there had been conditions that the labor sale of the proletarians  occurred to the bourgeoisie with respect to the price of labor at the time. Slavery in the quote exempts proletarians, that’s why Engels says the slave frees himself . . .and becomes a proletarian. The difference between the proletarians and slaves is that slaves are sold at once, while the proletarians sell themselves daily and hourly. Additionally, the slave is not opened to any form of competition and cannot experience all the vagaries a proletarian would undergo. The case of the abolition of private property becomes possible with respect to the change present in the social order. The choice to abolish private property by the slave or the proletarian is a free choice. (Sweezy, et al., 2005) The  Communists at the time allowed it, and since they know the level of conspiracy and the harm it gives, it becomes a free choice. This quote shows the choice that can be made with respect to the principle of Communism.

Fifth, Martin Luther King, Jr established a hand full of quotes in the letter from Birmingham Jail, and here is one. ““Just as Socrates felt that it was necessary to create a tension in the mind so that individuals could rise from the bondage of myths and half truths to the unfettered realm of creative analysis and objective appraisal, so must we see the need for nonviolent gadflies to create the kind of tension in society that will help men rise from the dark depths of prejudice and racism to the majestic heights of understanding and brotherhood.”  As he begins the letter with a tone that is remarkably restrained, he focuses on the clergymen and delivers his words. He was careful with his tone, and ensuring he avoids validating any kind of anxieties that might be felt by his audience. And so he made sure his restraint point was never close to apologizing to raise an encouraging tension. However, he justifies and embraces the necessity of tension. Since the Western civilization made the Greek thinker  feel like an archetype of wisdom, the reference to Socrates becomes important. The quote directs at the fact that if Socrates has a good mind, and had the right mindset to create tension in order to grow the mind, then Martin feels tension will be great to inspire mankind for growth. He carefully stresses that his context of tension  is nonviolent, even though no intentions of his was clear. In the same manner, the quote integrates the wager of inaction into its development. Towards the end of the lines, he postulates that continuing without tension will leave humanity in the dark depths of racism and prejudice. This quote is selected because it addresses segregation with tension, and if tension is not passively and implicitly warned, it could be dangerous.

Conclusively, these quotes ranging from Anselms’ to Socrates’ to Karl Marx’ to Frederick Engels’ and to Martin Luther Kings’, they have been able to establish the true facts hidden in the subcategories of philosophy as explained in the introduction. Philosophy is of diverse approaches, and these authors clearly used these approaches in these quotes.