Home > Projects/Reports > What is Interchange and Types of Interchange

Interchanges existence is necessary for roads that face sometimes overload and huge traffic. Interchanges are also the requirement of the road in case of the limited access divided highway. In the transportation system, building a grade separation at interchanges is quite normal from the very past. However, it was adopted for the trains in the 17th century prior than the road transportation system. 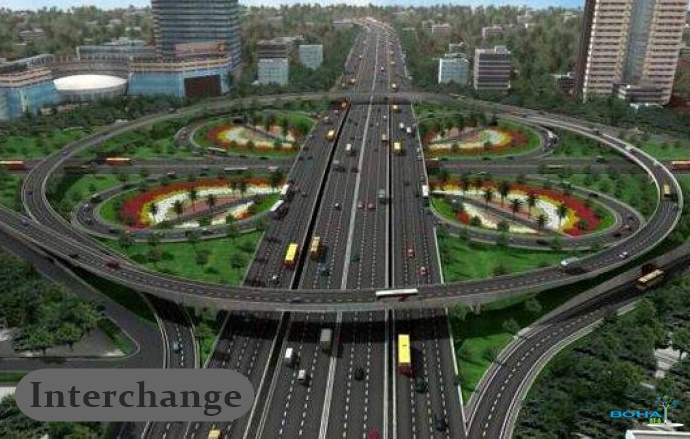 Basically, interchanges provide the solution to the problem of road’s capacity for the traffic. Various factors influence the configuration of the particular site as the traffic load, truck traffic, signs, intersecting legs, and topography of the site.

Diamonds interchange contain four ramps for traffic. In such interchanges, traffic gets entrance and goes out to the freeway with a small right angle towards the highway. Traffic signs and signals control the traffic going and coming from ramps at the highway. Diamond interchanges are cost effective however becomes more risky for accidents in case of the increase in traffic.

Cloverleaf is a complex designed form of interchange with four ways and two levels. In cloverleaf loop ramps works for all left turns. In case a vehicle wants to go towards the left side, it will first cover the targeted track and then it will get entrance in the 270 degrees sharp and curved loop ramp. Weaving is the current shortcoming of this type of interchanges. Cloverleaf also require less financial and material resources at the time of construction as it is limited to only one bridge construction. Therefore cloverleaf is also considered as a cost effective junction.

Partial clover having two quadrants and four number of ramps is also famous as folded diamond. Cloverleaf can be easily converted to the partial cloverleaf if there is no link with the highway. However, it reduces the capacity and eliminate the weaving but increase safety for the traffic.

What is Perceived Value

What do Kids do on Private Jets Case Summary