The Walt Disney Imagineering research and development, Inc. which is otherwise known as WDI or 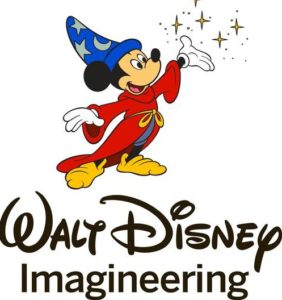 Imagineering refers to the design and development branch of Walt Disney Company. They are responsible for the construction and development of the Disney theme parks globally. Walt Disney founded it for the purpose of monitoring and managing the production of Disneyland. It was formally known as WED Enterprises, originating its meaning from Walter Elias Disney – the full name of the company’s founder. Around the 1940s, the term Imagineering was introduced to describe the association of engineering and imagination, and was further utilized by the Union Carbide based on an in-house magazine back then in 1967. After which it claims its first use in 1962. (Wright, 2005)

An effective role Imagineering plays in the Disney Company is the building and design of Disney theme cruise ships, resort parks and other related entertainment avenues at different stages of project development. Imagineering is an innovating concept of creative skills and talents of different intellects. There are various job titles falling under the different arms of Imagineering, these include architects, illustrators lighting designers, engineers, graphic designers, show writers, and many others. (Wright, 2005) Most of the Imagineers working with Disney work directly from the Disney headquarters in Glendale, California, and they are usually deployed to other satellite branches for as long as they desire to retain them within the theme parks.

Every organization is saddled with responsibilities based on various guiding principles.  Several Imagineers follow some key principle in the development of new ideas and the improvement of existing attractions. Usually, new ideas and improvements are developed to satisfy some particular needs. They are geared towards solving some problems through imaginations, for example, the ride vehicle of attraction that Soars Over California. The Imagineers understand they needed their guests to have an experience of the flight sensation, but they weren’t certain how they would achieve the activity of loading the people on to that ride vehicle in an efficient way having in mind that everyone is provided an optimal viewing position. Not until a certain day that an Imagineer discovered an Erector set in his attic, it was then he was able to envision and skillfully design a ride vehicle that could efficiently simulate hang gliding. (Scribner & Rees, 2007)

Another aspect of their principles is the fact hat they are known for returning to concepts for attractions and also shows that, no matter the reason, wouldn’t come to fruition. These concepts are usually reworked and they appear in another form – just exactly like the Museum of the Weird, an intended walk-through wax museum that had become the Haunted Mansion (Scribner & Rees, 2007)

The last guiding principle of the Imagineers is the principle of “blue sky speculation,” this is a process whereby Imagineers bring into existence great ideas having no limitations. (Wright, 2005) The ethics and culture at Imagineering depends on starting creative process with what is known as “eyewash,” the wildest, boldest and best idea that a person can bring to play, presented in a totally convincing detail. Several Imagineers have considered this fact to be realistic as the true beginning of a design process and then operate under the impression if it’s not possible to be dreamt, then it’s not possible for it to be developed. (Marling, 1997)

Walt Disney Imagineering is a conceptualized organization with creative ideas that have spanned through several countries, and have been awarded tremendously or their creativity. Over the years, they have been granted over 115 patents with respect to areas including special effects, ride systems, interactive technology, fiber optics, live entertainment, and advanced audio systems. (“Walt Disney Imagineering”) Their advancements explore their technological responsibility bringing in their systematic advancement in the Circle Vision 3600 film technique, as well as the FastPass virtual queuing system.

Everyone knows Imagineering for their specialization in Audio-Animatronics, which refers to a form of robotics developed to be used in attractions and shows in the theme parks allowing Disney to skillfully animate something in three dimensions. This idea was took its origin from Disney’s fascination with a mechanical bird he bought some time ago in New Orleans, which actually took up the development of the attraction ‘The Enchanted Tiki Room.’ This Tiki Room featured some birds that were singing Audio-Animatronic, and this marked the first of its technology. In 1964, there was a World’s Fair that took place, which featured an Audio-Animatronic depiction of Abraham Lincoln, it stood up and gave part of the Gettysburg Address for the Wonderful Moments with Mr. Lincoln exhibit. This marked the first human Audio-Animatronic figure. (“Walt Disney Imageering”)

In this present world, Audio-Animatronics are featured spectacularly in many famous Disney attractions, such as Pirates of the Caribbean, The Hall of Presidents, Muppet*Vision 3D, The Haunted Mansion, Country Bear Jamboree, and The Adventure Continue. Many guests are given the privilege to interact with some of the Audio-Animatronic characters, including Remy from Ratatouille, Lucky the Dinosaur, and WALL-E. The next revolution of Audio-Animatroic development is targeted at completely independent figures, which can be simply referred to as Autonomatronics. The first invented Autonomatronic figure is called Otto, it has the ability to hear, see, sense a human’s presence, engage in a conversation, and also sense and react to guests’ emotions. (“Disney Autonomatronic Figure”)

As time passes, Imagineering conceives different range of retail and grocery stores, hotels, and galleries that are designed to have an experience of it and then establish and sustain a very certain mood. For instance, the mood of Disney’s Contemporary Resort could be referred to as “the hello futuristic optimism,” and it’s promptly apparent providing the resort’s A-frame structure, modern décor, futuristic building strategies, and the monorail gliding silently across he lobby at every few minutes. All these combined together tell the story of the premise, precisely the hotel. (Marling, 1997)

Imagineering is the specific form of telling a story, and a visit to a Disney theme park should provide a feeling of entering a show. The major hallmarks of the Disney experience are geared towards extensive atmosphere, theming, and also attention to specific details. The mood is a totally different and identifiable experience. Furthermore, restaurants and shops that exist within the theme parks also tell stories. They consider all related details, ranging from the menus down to the names of the dishes, and also the costumes of the Cast Members. The focal point of these concepts is that all Disney parks are meant to give a unique experience in all senses. Even as guests walk through the Main Street in the United States, they should smell freshly baked cookies, which poses as one of the details that helps the story of the turn-of-the-century.

Everyone loves to hear the story of the Disney theme parks, due to the Imagineers design that strategically turned the place around and gave it an experience called “The Art of the Show”. Another dramatic aspect of the Disney Parks is the Cinderella Castle. It brings a different experience to the memory. The range of architectural elements utilized is really smaller in the upper parts of the castle in comparison to the foundation, which then makes it looks significantly taller than it real height of about 189 feet. (Wright, 2005)

Since the inception of Walt Disney Imagineering in 1952, they have established about eleven theme parks, four cruise ships, a town, resort hotels, shopping centers, water parks, sport complexes, and other related entertainment venues. (Wright, 2005) The external part of the theme park has an overhaul of Disney Stores which was planned with the help of Steve Jobs of Apple. They hoped to migrate from their traditional retail model, into an interactive entertainment hub per say.

These include the first Disney Store in Glendale, California, environmental and graphic design for The Disney Cruise Line, as well as DCL’s Castaway Cay, the purchase of Disney Stores by The Children’s Place in 2004, the design of the Tower of Nations, the design of exhibitions and galleries or the Autry Museum, the development of Encounter Restaurant by the Imagineering, the purchase of ABC Times Square Studios in New York City and many others.