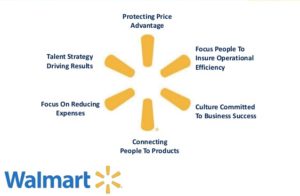 Walmart’s mission is to save people money so that they can live better lives. The company’s slogan, “Save money. Live better,” is synonymous with the company’s mission. Walmart sells commodities at reduced prices, and this helps consumers save money.

Culture is the foundation of all operations at Walmart. According to Walmart, culture is value in action. The company serves to deliver superior customer service, create a great front-line work environment and improve performance to achieve the purpose of saving people money so that they can lead better lives.

The company’s values are service to the customer, respect for individuals, striving for excellence, and action with integrity. Walmart fosters a culture of integrity, and this is promoted by global ethics. Walmart upholds their policies for ethical behavior everywhere they have operations.

The company is guided by the principles of a winning work environment, being true to who they are, and enhanced experience.

Walmart’s leadership structure is made up of an executive management team lead by Doug McMillon, the President, and CEO of Walmart, and a board of directors chaired by Gregory Penner.

The management style at Walmart is mainly based on transformational and transactional management. Other aspects of management at Walmart include charisma, vision, ethics, strategy and even distribution.

In 2016, Walmart reported a total revenue of $482 billion. The company had 2.3 million associates, more than 11,500 retail locations, 16 e-commerce websites in 11 countries, apps and a dynamically optimized supply chain. The company was able to return more than $10 billion to shareholders through dividends and share purchases. The company also announced a dividend increase to $2.00 per share.

Walmart is restructuring its U.S. store operations, and this will see the business consolidate its business divisions from six to four. The company’s restructuring comes in the wake of the recent changes in the global business dynamics. Walmart completed the acquisition of jet.com in January 2017 in a bid to widen its online presence and gain ground on their competitors.

Walmart’s main strength over the years has been its brand image. Walmart has been and still is one of the biggest brands in the retail industry.

Walmart’s financial position is also solid as evidenced by the company’s total revenue in 2016. The company earned a total revenue of $482 billion through its business segments, Walmart stores, Walmart international and Sam’s club. The company has also returned more than $10 billion to shareholders through share purchases and dividends.

The company has an excellent IT infrastructure to support its rapid growth and serve its large customer base.

Recent times have seen the sales growth of Walmart decline. This is attributed to reduced retail spending from customers despite lower fuel prices. The company is under pressure from deflation in key product categories such as food. The effects of the dollar abroad also have an impact on Walmart’s operations. The company’s heavy reliance on China for manufacturing makes it more vulnerable to currency rate changes.

Walmart’s management has also been questioned on a number of times. The management at Walmart has been in the spotlight because of what many have termed failure to connect with customers. The company has been said to have many managers, and this has had an impact on customer service.

The company failed to keep up with changes in the retail environment. Organizational change, management, and transformation have become prominent and permanent features of the business landscape. Business organizations need to be able to adopt such changes to their operations to keep abreast with their competitors. Walmart hasn’t been able to adapt to these changes, and this has hurt their business operations. Walmart missed the managerial revolution that has swept the American enterprise.

Some of Walmart’s business segments such as Sam’s club and e-commerce are struggling against their rivals. The area of e-commerce, for instance, is lagging behind Amazon’s, and this translates to a slower and weaker growth than Amazon.

Management strategy is an area in which Walmart can improve on. Recently the company improved employ wages, but the management strategy remains unaddressed. A large scope for further changes remain, and this could be addressed through strategies to improve employee working conditions and morale. Organizational and management restructuring would also improve customer experience and lead to larger profit margins.

Emerging Asian markets also present major opportunities for the brand to gain and form strategic partnerships with the local brands. Exploring auxiliary markets would work for the best interest of the underperforming business segments such as e-commerce and Sam’s club.

Walmart faces significant competition both domestically and internationally. The e-commerce business segment as mentioned earlier faces stiff competition from Amazon. Another company that poses a major threat to Walmart is Costco.

Walmart heavily relies on China for its manufacturing, and thus a strong dollar translates to low-profit margins for the company. The dollar has been growing stronger in international markets, and this has seen Walmart’s profit margins decline.

Walmart’s organizational structure is hierarchical and functional. The company’s organizational structure is made up of two features, hierarchy and function-based. Hierarchy is the vertical line of command and authority. Every employee, except the CEO, has a superior. Directives from the top levels of management are implemented by middle managers down to the rank-and-file employees in their stores. Function-based organization feature involves a group of employees fulfilling certain functions, for example, human resource management, information technology, marketing and the likes.

Organizational change affects a host of systems within a business structure. An organizational change in Walmart would among other things affect the management structure and the company’s workforce. Walmart’s organizational restructuring will see the number of regional managers reduce from 44 to 36. Departmental leadership will also in effect be restructured with an aim to increase the company’s competitiveness in the retail sector. A huge labor workforce will also have to be released during the restructuring of the retail company.

The need to maintain competitiveness and its status as the largest retail company in the world forces Walmart to change its organizational structure. A change in the structure of the organization will cause a restructuring of the company’s management structure for example integration of leadership teams and reduction of the company’s labor workforce. The restructuring will also lead to the creation of new positions.

Likert described four systems of management within an organization and proposed that an organization’s management system determined the organizational development of a company. Likert’s framework proposes that a management system could be a participative group, consultative, benevolent-authoritative or exploitative-authoritative. The organizational dimensions addressed include motivation, communication, interaction, decision making and goal setting. Walmart’s operations are aimed at achieving a set of goals mainly to save people money so that they can lead better lives. Walmart’s management has in the past been criticized for lacking in employee motivation skills and poor communication and interaction between the employees and their managers.

The theory proposes that organizations are social systems which are dependent on the environment they exist for inputs. This could be said so in the case of Walmart. Walmart owes its success largely to its employees. The environment is flooded with overpriced commodities and this augers well with Walmart’s objective to save people money to help them lead better lives.

The Burke-Litwin Model of Organizational change

Walmart should focus on restructuring their organization in a way that will promote both transactional and transformational changes. Management practices within the organization should be directed at improving customer relations and growing their customer base worldwide. Walmart in its bid to keep abreast with its competitors should also direct effort towards strategy and leadership which have previously been faulted for declining sales growth.

A behavioral approach to change emphasizes better utilization of human resources, and this fosters inclusivity of employees through participation, motivation, and empowerment. Employee participation, motivation, and empowerment will, in turn, enhance performance. A teamwork approach can also lead to solutions that can contribute to the development of organizations. Teams create synergy and thus teaming up at both the levels of employees and leaders will lead to solutions that will positively help the progression of the organization.

Education and communication are key to minimizing resistance. The leadership structure and the employees should be informed about the nature of an organizational change and the logic behind it through reports, memos, group presentations or individual discussions. Negotiations and rewards are other tools that can be used to minimize resistance and enhance engagement in the event of an organizational change.

Stability is also important since it reduces anxiety. The company should remain aligned with its vision, mission, culture, core values and guiding principles among other things. Organizational change should be implemented in an orderly manner, and the transition process should be managed effectively.

The most successful organization development at Walmart would be a change in the leadership and labor taskforce structure. Walmart’s leadership has been in the spotlight and has been blamed for poor organization and declining growth sales. The labor taskforce, on the other hand, has been reported to be poorly paid and this has no doubt demotivated the employees.

Organization development and change at Walmart has been long overdue, and the change, therefore, could not come at a better time. Once the organizational structure is developed and changed, Walmart will no doubt surpass its competitors even in the e-commerce business segment, a sector which Walmart has failed to dominate.

Cost of Life Imprisonment Without Parole Vs. Death Penalty in Utah