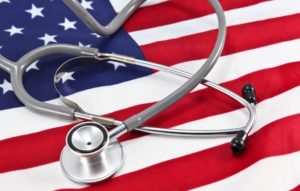 As noted in the recent studies, life expectancy in the US is lower than in other developed nations (Oeppen & Vaupel, 2012). At the same time, the US government has been providing adequate financial support to the healthcare system. In 2007, for instance, the US government used 16 percent of the year’s GDP to support healthcare, a proportion that was higher than in other developed nations (Preston & Ho, 2009). One of the main causes of the relatively higher mortality rate is the lack of adequate knowledge among most US citizens on how to manage and improve their health especially when they have serious illnesses (Preston & Ho, 2009). Although the use of mobile apps technology may not be the best solution to the issue, it can contribute significantly in solving it.

Mobile app is software that facilitates exchange of information through devices such as mobile phones, tablets or laptops (Boulos et al., 2014). Mobile devices, especially phones and tablets, have become very common in the US recently. A study conducted in Manhattan in 2012 showed that 87% of doctors and 90 percent of the residents owned tablets or Smartphones (Ventola, 2014). The mobile devices are very effective as communication tools since the users carry them everywhere they go. As such, healthcare information sent through such devices can reach the recipients easily and quickly. To address the issue of lack of inadequate knowledge and access to healthcare information among the US citizens, the Department of Health will need to work with other stakeholders to establish a quality improvement (QI) project involving the use mobile apps to educate the US citizens.

The rational decision-making model will be suitable in this case since there is already adequate information about the healthcare problem to be solved and the alternative approaches of solving it. Before developing mobile apps, the Department of Health will conduct research in order to gain more understanding of the nature of the problem of lack of adequate knowledge about healthcare by the US citizens. The second step will involve identifying and evaluating alternative solutions to the problem (O’Sullivan, 2014). Using mobile apps to supply health care information constantly to the US citizens is one of the options. The third step is to select the best option. If the mobile app option is selected, it will be taken to the final phase, which is implementation (O’Sullivan, 2014).

The life-cycle of development of mobile apps will involve the following stages:

The first stage will involve gathering information about the most suitable mobile apps to develop in regard to the problem to be solved and the objectives to be achieved. The Department of Health can develop one app for each of the objectives. The pre-planning stage can include the decision-making steps. Also, the scope of the whole project, its cost and the materials needed should be determined in this stage.

The second step will involve turning the ideas in the mind into sketches for the suitable software. In this stage, the interests and needs of all stakeholders should be considered.

In this stage, the functionality of the mobile apps should be determined. The developers should determine whether or not the apps are applicable in the mobile devices used by the stakeholders.

The design and development phase, the feel and look of the apps can be created using User Interface designer. Other design elements can be created using User Experience designer. Before making the final apps, the developers can start by developing a prototype that will be used in confirming that the apps are good and they have the desired features.

The apps will be built using the agile methodology. The methodology is suitable since it allows for changes when developing the apps. Also, the methodology allows the developers to add new features in case of a need (Adibi, 2015).

The functionality of the apps will be tested before launching. The tests will be conducted on the mobile devices of a sample comprising of healthcare providers, the workers of the Department of Health and citizens.

If the apps are found to be suitable, they will be launched and supplied to the targeted users through the internet. The apps will be made available for download and installation in mobile devices from one of the websites of the department of health and also in other relevant websites.

The mobile apps have already been found to be effective in reminding patients to take medicines or attend for healthcare services as advised by the healthcare providers. Also, the healthcare providers are already using the apps to provide advice to patients on how to take care of their health (Mosa, Illhoi & Lincoln, 2012). As such, the apps will be effective in improving quality of healthcare and reducing mortality rates if they are used by most, if not all, US citizens. Precisely, the apps will contribute in improving the life expectancy in the US.

My main leadership role in the project will be to guide the healthcare providers and US citizens how to implement and use the apps that will be developed. Despite the fact that using mobile apps to supply healthcare information may not be a difficult task, it involves several challenges. The most significant challenge is the leakage of private information. I will contribute in finding solutions to the challenges associated with the use of the apps.

My first goal for continuous improvement is to ensure that the mobile apps are effectively integrated in the mobile phones of the stakeholders and efficiently used to spread healthcare information to most, if not all, US citizens. The next goal is to make sure that the US citizens use what they learn to improve their health through self-management. The last goal is to target a reduction in rates of illness and deaths that can be prevented through self-management strategies.

The federal laws on the rights to privacy and confidentiality of all individuals will be the most applicable when implementing the project. The most applicable law is Health Insurance Portability and Accountability Act (HIPAA) Privacy Rule (Ehrler et al., 2013). The other laws that are applicable include patent laws, Pareto Principle and Zawinski’s Law.