The case study shows that in the tour operator industry, competition has led to consolidation. This seems to be a lucrative business, however, as tour operators receive about 87.9% of their revenue by planning, assembling and selling package tours. Tour operators derive 34.1% of their profits from domestic tours and the remainder from international tours (IBIS World, February 2013). Tourists from China, India and Brazil have been arriving in large numbers (Real Business, 2013).  Thus an analysis of the competitive and external environment (PESTLE – Appendix A) would help tour operators define their strategy.

Political stability in the context of growth pertains to strong institutions, an efficient bureaucracy, low corruption and a business climate conducive to investment (Shepherd, 2004). The UK tourism industry is unable to compete against international competitors due to lack of support from local government in the form of reforms and hence unable to reach its full potential (Stamford, 2009). Visit Britain expects tourism to develop into an industry worth £ 113bn if properly managed. However, despite tourism funding by the government being doubled since 1997, there is a threat that UK tourism sector could slip behind international competitors.

The tour operators’ industry has faced both economic and structural challenges over the past five years and through 2013-14 (IBIS World, October 2013). Industry revenues have been as a result of economic downturn, lower disposable incomes and reduced consumer confidence, due to which domestic tourists seek cheaper destinations.  Tour operators’ revenues in 2008 shows an increase over 2005 – from €60bn to €84bn (Appendix B) but this could also be due to rise in tour prices, rise in airfares and hotel charges. Therefore, loss of consumer confidence and declining incomes is a threat to the sector.

Several factors such as reunification of Germany, expansion of the European Union and International terrorism and war, have impacted the sector (Tourism Ireland, 2009). However, demographic changes, lifestyle changes have influenced the choice of destinations and travel patterns. Consumers demand value for money and consumers seeking peace of mind prefer packaged holidays (Euromonitor International, 2013). Tour operators now sell versatile, diverse packages, but also the effect of credit crunch on tourism. Consumers have responded to the credit crunch by choosing to holiday within the UK which has led to the trend of ‘staycation’ (Williams, 2008).  Staycation holidays have increased by 13% and outbound travel has decreased by 18% (Stamford, 2009a), which indicates that staycare and bundled holidays give tour operators the ability to update their product offerings.

Technology has empowered the consumer in many ways. Low cost airlines have made holidays more affordable; in addition are the high-speed train networks. Internet penetration provides an additional distribution channel. Technology allows access to consumer data which makes it easier for customers to customize their offerings. Mobile technology and social networking allowed consumers to search for information, compare and read reviews about service providers before booking their vacation. This has helped major tour operators like TUI, through the differentiation strategy, to target specific segments. Technology is therefore an opportunity to exploit the industry.

Tourism is generally associated with environmental degradation and ecological imbalance. The region is negatively impacted when the level of tourists exceed the environment’s ability to cope with the use (UNEP, n.d.). In addition, natural resources are depleted; land area is reduced as infrastructure development takes place. Local resources are also used up by tourists thereby impacting the lives of the local people. Pollution, both noise and air, also impact the environment. Threat to the environment is a threat to the sector.

The tour operators offering packaged holidays are bound to procure a licence called an Air Travel Organiser’s Licence (ATOL), and also contribute to a central protection fund called Air Travel Trust (ATT) (CAA, n.d.). Those who offer packages without air travel are bonded with other bodies such as Association of British Travel Agents. These regulations protect consumers against fraud. However, obtaining such licences can be costly and indirectly impact tour costs, thereby a threat to the sector.

Anticipating and interpreting change in the market place has become important (Fahey, 2003). While economic recession is the major threat facing tour operators, opportunities too, exist if certain structural changes are incorporated. The political, economic and legal environments pose threat to the sector but changes in the socio-cultural and technological environment offer opportunities. The tour operators should base their strategies on strategic intent, capability-leverage and market creation (Leavy, 2003).

The key drivers of change could be online sales, facilitated by technology as Euromonitor International (2013) expects online sales to be the largest proportion of sales by 2017. The ‘staycation’ trend also presents immense opportunity to the tour operators. However, more important than strategic planning is the manner in which planning is carried out (Ansoff, cited in Godet, 2000). Therefore, despite lack of government support, tour operators could design packaged holidays within England and interact with consumers through social networking platforms.

The tour operator sector in the UK is marked with consolidation as Thomas Cook acquired MyTravel and TUI acquired First Choice (Viardot, 2009). These two moves not only radically decreased the number of players in the industry but also became a deterrent to new players in the sector. Therefore, consolidation became a barrier to new entrants but advantageous to the existing incumbents. The table in Appendix B clearly demonstrates that the numbers of main players have significantly reduced in the sector, thereby confirming concentration of the market share in the hands of few. On the supply side, the existing players in the industry achieve economies of scale as large volume of sales results in lower cost per unit. Besides, to compete with the existing large incumbents, new entrants would need to invest huge capital, experience and learning. Customers would not be willing to switch to new tour operators as the switching cost would be high.

The main players, currently Thomas Cook and TUI are vertically integrated as they each have several companies under one group (Viardot, 2009). They have their own offices, sub agents, fleet, hotels and even airlines. However, there are other small tour operators dependent on external suppliers – airlines, hotels, distribution agents and transportation. Since the smaller operators have low market share, the suppliers too have few operators to cater to. Supplier switching costs would be low as there is no uniqueness in the supplies. The bargaining power of suppliers is therefore, low in the sector.

Consumers are the main buyers and now have higher bargaining power due to internet penetration and availability of information as well as the facility to book holidays online. In addition, switching costs are low as most tour operators offer homogenous products. Airlines are also directly approaching consumers and all of these can push down the price in the industry. Moreover, with regulations such as ATOL, consumers can decide to book their holidays only with authorized agents holding valid licence. Buyers are aware of competition prices due to the internet and hence can even package their own holidays.

Consolidation in the industry has decreased the number of players and the power lies in the hands of Thomas Cook and TUI. The combined revenue of these two biggest operators was three times of their three competitors (Viardot, 2009). Thus the other three operators – ReveTouristik from Germany, Club Med and Kuoni hold insignificant market share compared to these two large players. Indirect competition exists due to the online platform through which suppliers such as airlines and hotels contact the consumers directly. Even online bookings are dominated by specific agencies such as Expedia, Travelocity and Priceline who have taken market share from traditional tour operators. Differentiation is low while the exit barriers are high, which implies that competitive rivalry is high in the sector.

Threat from substitutes for the tour operators is high. Consumer trend of staycation could push them towards holidaying with families and friends. Hotels offer short-breaks and other forms of entertainment during weekends and vacations, which could be attractive to consumers.  Therefore, the impact of economic recession could result in threat from substitutes particularly as switching cost is negligible.

The tour operator industry in the UK is attractive as there are no threats from new entrants. Consolidation in the sector has made the position of the two largest players secure, particularly as they are vertically integrated.  While the bargaining power of suppliers is low, the bargaining power of buyers is high, facilitated by technology. Competitive rivalry is high and so is the threat from substitutes. However, competitive forces can change because of the high potential envisaged by Visit Britain. The major players currently have the advantage of economies of scale. Despite their tailor-made packages, the existing players must build barriers to entry to remain competitive. Firms should focus on differentiation by leveraging their strength (Porter, 1979).

Appendix A The PESTLE Framework 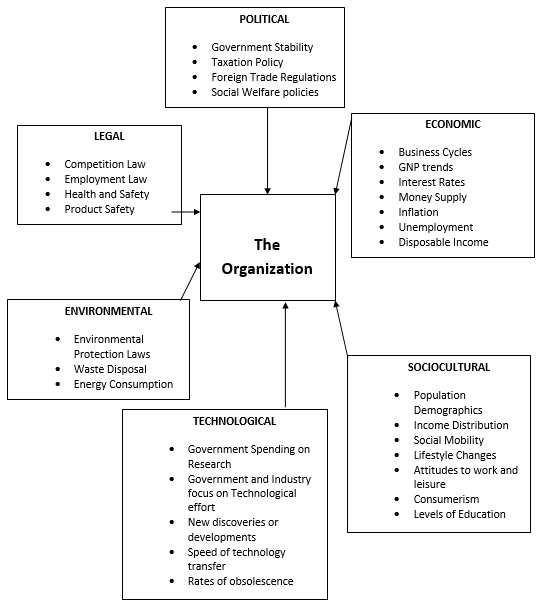