What is Human Nature 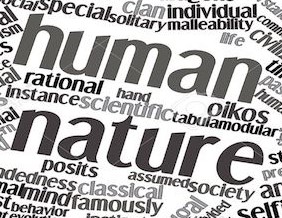 The implication that there exists something such as human nature suggests that there is a particular stance with relation to the things or rather what a human being actually is. It is a question of concern as to whether humans really to have this thing called nature. If indeed human beings have nature then it is a concern to understand what it exactly consists of. These concerns are not readily answered from the exclusive description of the particular traits, and it is this aspect that gives some of the major reasons why there are continuous debates over the issue of human nature. Talking about human nature essentially implies that there do exist certain things on how or what human beings need to be. Consequently, there is normally a sort of normative self-reference in the manner in which the concerns of what human nature is are tackled. It is actually an articulation of how humans take and should understand themselves.

The theories about human nature does state things concerned with the place that humans occupy in nature. The human nature theories tend to come up with definitions of what particularly constitutes the human being and as thus differentiating them from the other living organisms. There is a strong need by one to be able to understand and be in a position to distinguish themselves as being pats of nature as well as the nature that humans possess. The two issues, in most cases, do not coincide. The first case gives a descriptive approach as well as provides an investigation to the varied phenomenal and empirical aspects that does assist people so that that they can readily understand the place that they are occupying in nature. The other part is more or less a normative problem and is normally linked to the destiny of humanity in a general aspect and at the same time to a person’s future and the reason of the life that an individual human being may be having (Wilson, 2012). The importance of this relies on and is related to the interpretations of the places occupied by the culture and the history of human beings. Considering the two in separate views, the two approaches are seen to be offering a foundation for the interpretation of the human nature from more natural and human view points. As thus, the sciences are always attempting to come up with additional materials that are deemed relevant to the understanding of the place of human beings in nature and not only concerning the manner in which questions concerning the destiny of humanity are answered.

Theories of human nature that are putting into consideration the understanding of the human place in nature are normally having accounts for a number of issues. One of the issues would be to understand the things that are predominantly making the human race sort of different from the other species and the other would be on tying to understand why human beings are human beings and whether they are having a free will. Most of these issues would be seen as arising in attempt of differentiating among the issues that were in the past discussed with reference to the differences that occurred among the human bodies and their souls.

There are a number of ways in which human nature is expresses and understood. There are theories like the Platonic Theory of Human Nature and the Aristotelian Theory of Human Nature that are in a way contradictory. Considering the Platonic Theory, Human beings are seen as rational and social creatures. In this theory, Plato attempts to identify the nature of human beings with reason and the souls of humans and not just their bodies. In indentifying humans, the theory looks at the souls that humans have and it is this that dictates the role that they ought to be playing in the society. The failure or success relies upon the sorts of societies that humans live in and the human life ought to be political as per this theory. The theory sums up that for humans to sculpture who they are in the society and to identify with themselves and to be the people they should be, they are supposed to be, they need to live in the real society.

The other theory, Aristotle, sees humans as social and rational animals though their bodies and souls both form parts of nature. This theory acknowledges that without the society humans would be something else and it is the manner in which we are actualizing our natural potentials that constitutes the self. It is all about philosophizing so as to be in a position to find out true selves of humans after whom they actualize on the potentials which are moral and intellectual by virtue. Plato’s theory goes ahead to acknowledge that rationality is the nature of humans as it is rationality that is the natural function of humans and their nature (Pinker, 2007). It is rationality that differentiates humans from the other creatures and it is what makes them who they are.

The other theory is the Judeo-Christian human nature theory which identifies humans as the creations of an almighty God. In this theory, freedom is seen as a gift that is coming from God above and as thus is responsible for giving humans dignity. This theory views humans as being the children of God and being images of God. As thus is sees that it is humans who are symbolizing the makers as well as the readers of signs. In this theory, life success is attributed to submission to God and this result in divine assistance that helps humans see the meaning of their lives in reference to memory and reason. It is in the Judeo-Christian theory of nature that success is deemed to be coming about as a result of choosing between the good, which is God over the evil.

The Buddhist theory of human nature is the other religious theory. The Buddhist theory considers human nature to be more of a desire and a conscious and that humans do not get to create their selves but rather it is merely an illusion. According to this theory, the success of mankind relies upon one’s ability to escape from reincamation and being in a position to see the negativity of the nature of humans. Desire leads to suffering and builds up to bad things particularly when one is not justified. This theory as well acknowledges that the human consciousness only comes about when one is buried desire and thus it is more or less arbitration.

The subsequent theory is the Religious Existentialist theory of human nature sees humans as radically free and essentially uncertain creatures. It acknowledges that humans are radically free and that they are constructing a self by bridging doubts by faith in themselves, those of others and of God. Human beings are having a language and as thus they are having a mediated reality and therefore certainty is not possible as there is always doubt.

The Darwinian theory of human nature sees that humans are one of the several exceptional forms of the primates and that they are just animals. The theory has normative implications that the success of the human life is pragmatic. The ideas and the actions that are used are merely instruments or tools that are employed in solving practical problems and the ways of surviving. In this theory, nature is seen as having no purposes and only being a mechanism through which humans respond to the environment.

The principle of humanity is a section of nature and there is no way it is above or outside nature. The concept of human nature needs a lot of concentration to the nature as well as to humanity. There are physical traits of being man including being a member of a community, a family or a work community. Considering the theories of human nature as discussed in this paper, the distinguishing traits that we have are reliant on the way we want to be identified and the places we are in. Human nature at work and in my family are naturally and independently depended on culture. Human nature around me is directly implicated by ethics, politics as well as theology. Human nature is regarded as both sources of norms of conduct as well as ways of life. It is presenting an obstacle or constraints that are deemed important on living good life (Dewey, 2002). The theories of human nature imply the things that are entailed with the spaces that human beings occupy as this explains why my community is composed of human nature that is determined by ethics, theology and politics as the individuals in the community subscribe to either of these.