The author is a renowned writer with a characteristic economy of words making his works some of the effective delivery of the message with precision and accuracy. The story A Clean, Well Lighted Place was written in the mid-1920s at a time when modernity and traditionalism were clashing against each other’s realities (Shmoop para.1). Also witnessed in other works by the author, the themes of social exclusion, death, loneliness, and modernity demonstrate the relevance of the narrative in dealing with social issues seen in the plot.

Social Issue and Its Impact on the Narrative

Old age is associated with a stage in life when individuals settle down and have a peaceful life away from complicated activities since their energy dwindles. Spending time with the family, particularly the extended family and resting constitute the central depiction of individuals in their later stage of life. Pensioners enjoy the savings they made during their young ages as opposed to active participation in work. However, A Clean, Well-Lighted Place generates a different picture of a suffering older adult lost in desperation, loneliness, and isolation. Despite having enough money and resources to sustain his life, the main character older man struggles to fit in a society that cannot deliver the social experience he deserves. Social exclusion of older adults is a social vice that destroys the dream of a peaceful rest for the past generation. 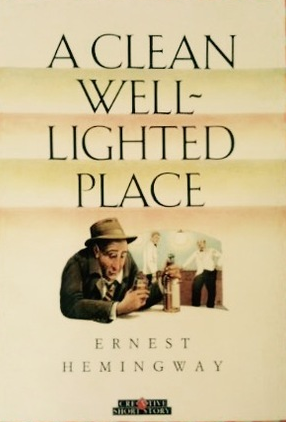 The events in world political history left a massive scar to the human society since war and aggression create animosity resulting in death and desolation. A cold society depicted by the setting of the story after a time of war shows the coincidence it has with social insensitivity. To illustrate this, the author uses the presence of a soldier and a guard in the story for the obvious reasons of some force needed to defeat certain disorderliness. Besides, the waiter’s treatment to the deaf older man shows insensitivity as speaking to the older man aware of his disability is quite an insult.

In terms of the fictitious application of the plot, the author selects the events of causation that resonate well with the social issue of neglect, isolation, and desolation of the old in society. In illustrating the nature of the main characters, particularly the older man, it is clear of how the loneliness and isolation manifest in the story development (Lombardi para. 2). It is perhaps due to the depiction of the difference in the condition of the commotion in the daytime and late-night silence that the author generates the gentle character of the older man, who chooses the late night for his drink. The author, on the other hand, portrays the young waiter as a violent and insensitive character by choosing to retire when the commotion subsides in the noisy and dusty lane. “‘You should have killed yourself last week,’ he said to the deaf man,” (Hemingway line 19). The older waiter’s character seems to be in the middle of the two extremes in that his lenience for the older man’s choice of drinking time does not convince him to take over. He understands the social impact of old age and the risks of desolation, and he is aware of the realities that await him in his later days not too far, unlike his younger colleague. The interaction of the three characters in the narrative shows the disconnect that affects the young and the old within the theme of responsibilities of a socially cohesive society. The young cannot understand the challenges of the ancient such as why they could opt to pick the late hours for drinking crowned with sheer lack of sensitivity. We also learn about the family setting for the older man, with only one niece making up the family that takes care of him. Lack of other family members raises questions on how practical his resting days are, shedding more light on why he is in virtual in existence in terms of social life befitting a pensioner.

Description of the older man by the waiters introduces the environment in which the story develops and perhaps enables the author to generate the tension between the characters, which form the social exclusion theme. One of the most critical developments in the story is the auditory disability and drunk attributes of the older man. The demand for service by the older man through rapping on the saucer initiates the direct interaction showing the language barrier in the beginning. To illustrate the insensitivity, the sign language issued in the beginning by the older man is responded with a nasty reaction through by voice and later some insult. Although the older man cannot hear what those around him say, the insults hurled at him describe the cold world around him as well as the depiction of the young waiter. The conversation between the two waiters sheds more light on the plot on potential reasons for the suicide attempt by the older man, absence of the wife and the fears of the young waiter to become mature. Denial for another serve of brandy to the older man and his honourable reaction of opting to leave silently leaves jitters on the young man’s perception of old age. “The old man stood up, slowly counted the saucers, took a leather coin purse from his pocket and paid for the drinks, leaving half a paseta tip,” (Hemingway, line 48).

The exit of the older man after denial for more brandy ushers in the episode to learn the actual darkness in the life of the young and older waiters who struggle differently to come to terms with old and young age. A section of the customers prefers to partake in late-night drinking due to myriad social challenges pushing them to insomnia. Fear of emptiness in life caused by the insensitive society causes many to suffer and sometimes contemplate taking their own life. Virtual darkness exists in one’s life when deserted and excluded by society, and it begins to make meaning when the older waiter puts out the café’s lights. Orderliness and cleanliness observed in the night when noise subsides and dust soaked up by the evening dew makes meaning in the night silent and cleaned up pub where life’s worries can be drowned in booze.

Visitation of the bar by the older waiter makes a mock of the theme of A Clean and Well-Lighted Place, which is depicted by the café. The bar lacks the balance of light and cleanliness, standards observed in the restaurant where the older man enjoys his drinks. The observation of the more former waiter to the effect that the bar lacks a critical element of cleanliness shows that age issues finally catch up with his choices and decisions. His option to remain sober for a little longer, however, illustrates his judgment mind as opposed to the old deaf man who wishes to soak his brain in alcohol. All the characters are finally brought together by the same force of nature and have to get to bed even if they have a different choice.

Old age and death take a fair share of social perceptions between the young and the old. Whereas the young think that they can escape old age and its predicaments, the author paints the picture that they need to have in that theirs is a transition stage that melts away with time. As an illustration, the use of the older waiter who understands the situation of the young waiter and that of the older man augurs well with the transition phenomena that the young must accept. It follows that the problems that face the past generation are not understood by the younger generation that almost dispels old age as an ugly thing. Perhaps the impact of the delusional perceptions is witnessed when the past come to the reality of life as opposed to their youthful expectation of remaining young for the rest of their lives. As a consequence of the existence of social acceptance of ageing among the young, old age is a burden to bear for them, usually ending in suicidal thoughts. “‘He attempted suicide last week,’ said one waiter” (Hemington line 2). The attempt to commit suicide by the older man shows some form of denial of the nasty things about age, which is against youthful wishes.

The theme of young age and modernity can perhaps be generated from the narrative as captured in the young waiter who sees the world from a different perspective. Because of the youthful and delusional thoughts that assume that confidence and young age are permanent and inseparable, the author depicts the young as hasty and judgmental. The young waiter explains to his colleague that he wants to rush home to be with his wife and is insensitive to understand that the older men would be alone. A hasty decision mind with a little understanding of the underlying issues shows how ill-prepared the youth is, in internalizing early age life. Perhaps an advancement in an age such as the older waiter would equip the young waiter to deal with insensitive and unaccommodating attitudes. By internalizing such issues, the youth would be ready to learn to appreciate life at all phases and cope with the shock of realities of loss of confidence and vitality that they are deluded to be permanent. The image of light and shadows in the story can be used to understand the age differences, perceptions, and wisdom between the characters.

The most dominant theme of the narrative is perhaps that of suffering for the older adults who should otherwise be enjoying the fruits of their sweat gathered at their young age, on the contrary, desolation masks the life of the older adults instead of finding consolation from the experience that they have built over the years. The author paints a picture of a difficult life of languishing in terms of social neglect leading to a cold environment for the aged to live in. By depicting the family taking care of the older man to be only composed of a niece, the author illustrates the void left in the core of social life that the older man has to cope with. Because of the many challenges facing the older man for living in an environment devoid of human warmth, the author uses the conspicuous absence of the wife to assist the man in life. Although he is old and aged at around 80 years, the loss of a wife to whichever cause is a devastating shock to the older men. Since the society does not take special note on the care needed by the old widowers, the impact of the loss sustained may lead to eventual loss emerges clearly from the narrative. It is perhaps the intention of the author to show the missing link for the roles of the entire family in maintaining social health for the aged under the predicaments of grief, loss, poor health, erratic sleep, and waning memory.

Case Study of the Foxconn Suicides: An International Perspective to Framing the Sweatshop Issue Analysis

What are the Pros and Cons of Praying in School