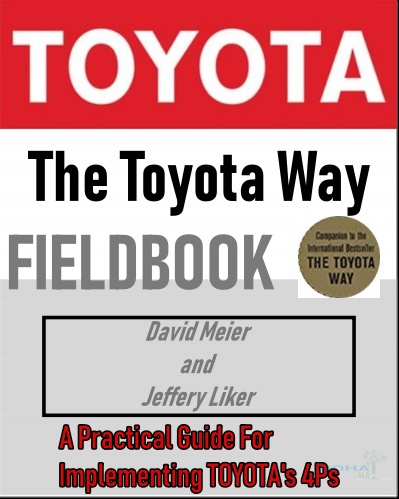 by addressing the philosophical aspect of one of the best automobile manufacturing company Toyota. This book talks about the operating systems of Toyota in details and highlights the practical approaches that are used by the Toyota leadership to achieve the goals of Toyota.

The big idea from the philosophical aspect of Toyota is addressed in this book. According to the book, it is explained that in the decade of 1980s people started to realized that the automobiles manufacture by Toyota is long lasting with strong durability that required comparatively fewer repairs to the care that are manufacture by the other companies. Due to this strength of the company, in present days, Toyota has become one of a best automobile manufacturing company as well as it is the most profitable company in automobile manufacturing industry.

The core competency of the Toyota is high-quality production in less time and with less on-hand inventories. Considering the key success, Toyota Way explains the business philosophy and management principle that are utilized by the Toyota to reach the heights of success (Liker, 2003).

Considering this aspect, the major aspect that is described in the book is the lean production management alongside the 14 principles that enables Toyota to produce the quality product with all the excellence. Furthermore, the book talks about the how these principles and lean production could be adopted by the other businesses with propose to improve the business processes by reducing the operational and production cost.

Following this in the book, the writer has talked about the power of Toyota that makes it world class automobile manufacturing company in the world. In this regards, the writers have stated that Toyota is using operational excellence as a weapon to achieve success in the business world.

In this regards, in the 1940s and 1950s Toyota introduced Toyota Production System alongside the lead production. The focus of the Toyota Lean Production was on to eliminate the waste material and waste time from the every single step of production process. In the result of the lean manufacturing, Toyota received fast business operations and improved production by ensuring the quality of work into work systems, by perfecting business processes, by eliminating waste resources and time, by developing a culture of continuous development and by reducing the cost of the resources and the raw material that is used in the production processes.

Toyota way also explained that 4Ps Model that is used by the Toyota way. The 4P model of the Toyota way was based on continuously addressing and solving the root problems through organizational learning, developing relations with people and partners to add value to the organization, utilizing long-term thinking and using an approach o Right Process that will produce the rights results.

The book has also talked about the ways though which Toyota became the best manufacturer in the world. In this regards, it is said that Toyota Production System is the key that leads the organization to become the world’s best manufacturer. Toyota made its operations flexible that appeared as the emergence of TPS. The book has also described the non-value adding water in the production process that could be controlled to control the manufacturing and to improve the organization operations.

Following this, the book highlights the principles that are used by the Toyota to become the most successful manufacturer in the world. In this aspect, Toyota adopted long-term decision making philosophy, develop continuous process flow, to avoid over production they use “Pull System.” Toyota also works on the principle that the workload should be level out, strengthening the culture to resolve the problem so that right quality could be achieved on the right time. Develop exceptional people that have the capacity to follow the philosophy of the company, give respect to the partners and suppliers. Understand the situation and make the decision slowly by addressing all the possible options but implement decision without any delay. Continuous improvement should be adopted to become a learning organization (Liker, 2003).

If we thoroughly analyze the Toyota Way and the knowledge that is provided in the book, we can learn that Toyota way is not merely a success story of Toyota but the factors that are used by the Toyota to become a world’s best manufacturing company are the basic factors that could be adopted and utilize by any service providing and manufacturing company. Toyota Company has managed well its operation management and this is the reason that company is successful; the company is following the management process as the inputs used effectively and connected with the output because the customers are satisfied.

In this regards, it can be seen that Toyota used its operational excellence as a strategic weapons. Through the case study, it is clear that top management is making the strategies, which means that the company focuses in on the strategies that are concerned with the strategies of operation management. Considering this factor, every organization can do this effectively by improving its operational excellence. The Toyota Way asks about to eliminate the waste resources and time by improving the organizational operations. This approach could be used by any organization. Likewise, Toyota Way talks about reducing the cost by finding the alternative to the expensive operational management systems. Another thing that could be adopted by the organization is the developing a learning culture that supports the continuous improvement of the organization.

Following this, the Toyota ways could be effectively use by taking action to improve the technical systems through the cultural change within the organization. Technical system and cultural change also focuses on the operational management because there is the factory management, production control, system analysis, cost control, productivity analysis and the material planning is focused by the company. The Toyota Ways gives a lesson that it is effective for the organization to improve the quality of their operations by doing first and learning second that reflects the practical learning approach.

Toyota is managing the relationship with the employees, as training is given. Another aspect of operational management is to manage the relationship between the people and the management, in order to achieve perfectness in the business process. Thus the, Toyota believe in continuous practice as they stated that if a person continues to do the same task again and again, then he will become fluent to do a specific task that will reduce the time of the doing a specific task as well as it will also improve the quality of the output.

Subsequently, the 4Ps model of the Toyota way could also be implemented if an organization focuses on the root problems that resist the organizational learning. Subsequently, as Toyota ways talks, the developing relations with the partners and people would result as a way to add value to the organization that could be done by any organization. Likewise, Toyota said that the focus should be on long-term thinking, therefore, in the decision making the organizations must consider this factor and use long-term planning by focusing on the future goals that also focuses on the principles of operational management, so that the right process could be focused. The focus should also be given on to improve the make the processes right because only the right processes will produce the right results (Liker, 2003).

Moreover, the core of the Toyota way is that value can be added by eliminating the non-valuable things such as overproduction, time wastage, incorrect or over processing, excess inventory, unnecessary movement, Defects, less productive employees.

In this regards, the Toyota ways could be used as a model to improve the organizational operations, however, the company is managing the physical and technical operations, so that there could be continuous improvement through the innovation and the manufacturing system could be focused, the operation management is followed here. The operation management is applied by the company because the principles of the general management are there. Toyota believes on the philosophy of sled reliance as well as Toyota supports the idea of let’s do it us attitude. Through this approach, any organization can improve its organizational output by improving its organizational operations systems. Furthermore, they should manage the workload as it could be effective to reduce the risk of unsold goods and it will maintain balance in the use of the labor and goods. Employee empowerment could be utilized by any organization to standardized task.