Transformer And The Three-Phase System

Transformers are the electrical devices that transfer electrical energy through circuits from one place to another by working on the function of electromagnetic induction. The current and voltage changes that allow the transfer of heat from one place to another without making any change in the frequency of the current and the voltage used in the circuit. The voltage used in the transformer is either AC or DC that diminishes and enhanced according to the need where it is going to be used by the circuit. The transformers store a large amount of electricity in them. They are usually used to meet the high voltage needs of electricity to meet the overall demand of electricity for the people to use it. There is now many advanced technologies have been developed in the field of making transformers in an advanced from so that it can facilitate well to the people they are serving well.

The auto transformer is a special type of power transformer that consists of a set of the coil that is connected at one side with each other to provide a step-down function. They are magnetically linked by a common core with the electrical connection as well. The isolation transformer has 1; 1 turn’s ratio, which makes it safe to use and secure as well.  The electricity that is transferred through grounded connections is transferred by the isolation transformer. By using this transformer if contact is made across the transformer’s secondary wires with second winding. Technically, they are not connected by the conductors but by insulators as well.  The isolation circuits are in routine form described point of view. It does not follow the step up voltage formation the up-down process of formation of the circuits. The instrument transformer measures a very high value of voltage or current by its terms. If we want to use the low range measuring instruments together with a uniquely formed accurate ratio transformer then we should consult to this type of transformer in future. It allows the instrument that is attached to it to run with full power in the instrument through gauge the current or voltage without movement of the instrument connected with it. (Galco.com, 2017) 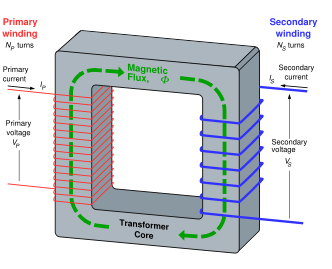 The main electric power is connected from this connection, which is the main power of electricity at the transformer.

The electrical power is sent to the load side by this connection. This depends on the connections where it is stuck or is connected with the load to transfer the current to the circuit. The current may be decreased or increased according to the need for the circuit.

There are secondary and primary two windings in a transformer. Both have different functions to perform. The primary coil performs the transferring function of power draw from one place to another or from the source. While the secondary coil transfers the energy after changing the voltage of the load. To reduce the creation of flux these coils are divided into several coils for reducing the creation of the coils.

The magnetic flux that is created in the transformer is controlled or transferred from one path to another by the portion of the core. It is not a bar of steel anymore; it is constructed by many sheets of laminated steels in the form of layers. This formation is used to reduce the heat in the process of transferring and delivering electricity from one circuit to another. (Quora.com, 2018)

The three-phase transformer is constructed and designed in a different way that it operates well in the working term of it. The transfer of voltage that is made easier for the transmission that we may not only concern with the one single-phase transformer but also with three phases or four phase as well. There are six fazed and along with the best efficiency, 24 phase transformers are available as well. The three phase’s transformers are used for the generation, transmission and distribution in industrial areas of electrical power. There are too many electrical advantages present in three phases there are three voltages and currents that are 120 degrees in angle. (Electronics-tutorials.ws, 2018)

The following diagrammed show the working of the three-phase voltage transformer in the system where to is concerned with. This line-to-line voltage is connected to the system and transfers current from one circuit to another. (Alaboutcircuits.com, 2018) 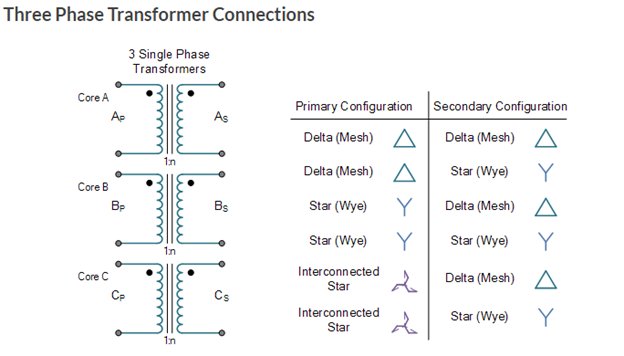 The connections in this three-phase transformer are very much sensitive and complicated as well. The primary and secondary coil interaction with this system can be connected in a different configuration to follow the required amount needed to meet the demand for it. In this situation, we connect in three possible connections that are “star” “delta” and interconnected star also called zigzag as well. The combination of these three connections when connected with each other they give the best results in terms of providing good efficient electricity through their wiring. (Ecmweb.com, 2009)