The Theory of Everything Overview


The movie of “The Theory of Everything” was released in the year 2014 which is a British romantic biographical drama film which is basically set at Cambridge University and discusses the life of theoretical physicist Stephen Hawking. The film has been directed by James Marsh. The movie stars Eddie Redmayne and Felicity Jones where the movie looks to discuss the extraordinary story of one of the world’s greatest and most talented living minds, Stephen Hawking who eventually falls deeply in love with the fellow Cambridge student Jane Wilde. Stephen Hawking who was once a healthy and active man received an earth shattering diagnosis at the age of 21. Jane fought tirelessly with Hawking and motivated him to work on his most ambitious scientific works (Jacobson, pp. 344).

Together with Wilde, Hawking defied all the odds breaking new grounds in science and medicine and eventually achieved more than what they could have ever done or dreamed off.  The film is therefore based upon the memoir travelling to Infinity: My Life with Stephen. The role of Hawking is played by Eddie Redmayne and Wilde is played by Felicity Jones with supporting cast including Charlie Cox, Simon McBurney, Emily Watson and David Thewlis (Laughlin,, pp. 28).

The world premiere of the movie was on 1st January 2015.  The film received all the positive reviews from all corners of the society. The message delivered in the movie has been accepted by one and all and it reflects upon the determination and hard work of Stephen Hawking. 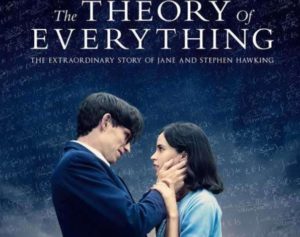 At the University of Cambridge, Stephen Hawking starts a romantic relationship with fellow student Jane Wilde studying literature at the university. In spite the fact that Stephen Hawking had interest in physics and mathematics; the teachers were concerned about the fact that he did not have the correct or the accurate thesis topic. Hawking along with his professor Sciama after attending a lecture of black holes decides to complete his thesis on the concept of black holes and considered it a part of the creation of the universe (Earnshaw, pp. 52).

While completing his research, Hawking muscle start failing and eventually causing him to fall and hit his head. He finally comes to know that he had motor neurone disease which will gradually affect his ability to talk, breathe, and swallow and movement of his body in about two years. Stephen eventually starts worrying about his brain where the doctors inform him that the disease will not be affecting the brain and nothing will happen to his thoughts. When Hawking become reclusive and remains focused on his work, Wilde confesses her love for Hawking and marries him where the two have a son also (Danger, pp. 5).

During this time, Stephen presents his thesis to the examination board where he argued that black hole which has been created in the universe in a big Band will emit heat radiations and will eventually land up in a Big Church. During this time, he eventually looses the ability to walk and starts using wheelchair. The movie throughout has discussed the determination, efforts, the commitment and constant motivation to achieve goals has been the major theme and discussion point throughout the movie (Jacobson, pp. 344).

The movie looks to reflects upon the hard work that had been put in by Stephen Hawking and how he actually motivated himself all his life in spite being disabled and limited to certain things in life. He never shifted his focus, his determination remained his most aspiring motivation and Hawking was able to deliver the results that made him what he is today.

As a scientist, the movie has been quite impactful for many different reasons. It does not only talk about the technical and educational achievements of Hawking but the movie has also discussed the science-themed movie where the math has been quite implausible. It also discusses the differential equations and the diverse integral forces have been expressed within the movie quite appropriately (Laughlin, pp. 28).

The movie basically explores the idea of three lessons that can be learnt from the movie. The most obvious message that has been given to the viewers is about the fact that how bad the life may be, there is always something that one can eventually do to make life better and succeed. The message of the movie is “While there is life, there is hope” (Hawking, pp. 15).

The important thing is to value it, realize and work upon improving it. Furthermore, the movie has expressed the importance of understanding the valuable aspect that we all possess and it discusses the importance as to how we can deliver better results and how we all can achieve better results in the future.  In addition to this, we are good at different things; we all are born with something special which we learn at school, college or at university (Molyneux, pp. 1070).

It is important to make the realization as soon as possible and work on improving it. In some situations, it takes a bit long to realize our strength and we learn it when we enter professional world, but the life definitely gives us all the opportunity once in our life time.

The message of the movie throughout discusses the struggles of Hawking and how he eventually came out of all of them in a successful manner where the movie also discusses the fact that we all are capable of something and if we can hold on to your beliefs and remain determined we can succeed in life and it is a fact that nothing can stop us (Dakin, pp. 80).

Hope is all about being positive and finding different ways to motivate ourselves. Until we die we have the opportunity to live and achieve our dreams. The person dies inside when he stops dreaming and does not try to improve his situation. The main idea of the movie therefore can be considered as the positivity which one has to find within himself. Life is all about opportunities; life is all about getting up once fallen. Life gives us all one opportunity and it is important for us to grab it and avail it (Earnshaw, pp. 52).

Along with this, the author of the movie has even expressed the situation where Felicity Jones (Jane Wilde) in the movie has multiple times said to Eddie Redmayne (Hawking) to remove the glasses off his face. The message that has been given in the movie is to basically showcase the fact that “This is better” (Jacobson, pp. 344).

The idea of this specific scene that is seen quite a few times is to explain the fact that when moving gets tough one has to come out of it stronger and needs to make the move in the direction of making all the efforts that can lead to improved situation.

We all need someone by our side to be there supporting us in tough times and motivating us to come out of it no matter what. This is the second message that is given in the movie and it is the continuation of the firs message and that is “Hope”.

Over here, Hawkins has been able to motivate himself because he had his wife and his little princess on his side. The movie depicts the message where it says that everyone has someone in life that can clean up the mess and bring in the positivity that can lead to achieving bigger objectives and goals. If the factor of motivation is around you, one can remain motivated and stick to the goal for a longer period of time (Dakin, pp. 80).

Finally, the last message that has been presented in the movie is presented at the end of the movie; he is seated on a wheelchair and the three kids walking towards them.  The end of the movie basically explains us the fact that we need to always reflect back on our achievements and should motivate ourselves based on what we have done in the past (Danger, pp. 5).

In the end, it can be said that the movie has been quite expressive in sending out the message of believing in you and understanding the things you have achieved in life and value them. It is important to be real and honest to yourself and achieve things that you always dream off. Life is all about understanding the achievements you can take out of it.

In the end, it can be said that the movie “The Theory of Everything” has been a true reflection as to how an individual with his efforts, determination and courage defy all odds and overcome his personal lacking and actually come out victorious. The movie has actually explained one and all that determination and constant efforts lead to glory (Dakin, pp. 80).

Stephen Hawking is an example for the younger generation that tends to lose hope rather soon. They complain about the things they do not have. The movie “The Theory of Everything” can bring in the motivation for the youth and they can learn a lesson or two out of it. Stephen Hawking in spite all his issues not only related to his health and disease but his marriage did not work either and he had to separate from his wife, he did not lose hope, remained committed to his goal of life and that was to serve the people with his research work (Earnshaw, pp. 52).

Therefore, it can be said that the movie is all about encouraging us, giving us the hope, improving ourselves and celebrating our achievements. It is necessary for everyone to be honest with themselves because if you will not value yourself no one else will do either. It is important to stick to the goals and achieve them in spite all the hurdles and drawbacks you have to face in life.  The movie is all about motivation in life and how you can deliver results in life (Danger, pp. 5).