The Stress Effect On Already Isolated Yeast Using Different Environmental Samples explains that Yeasts are eukaryotic microorganisms classified in the kingdom Fungi, with 1,500 species currently described (estimated to be 1% of all fungal species). Yeasts are unicellular, although some species with yeast forms may become multicellular through the formation of strings of connected budding cells known as pseudohyphae, or false hyphae, as seen in most molds.Yeast size can vary greatly depending on the species, typically measuring 3–4 µm in diameter, although some yeasts can reach over 40 µm. Most yeasts reproduce asexually by mitosis, and many do so by an asymmetric division process called budding.

he word “yeast” comes from Old English gist, gyst, and from the Indo-European root yes-, meaning “boil”, “foam”, or “bubble”‘Yeast microbes are probably one of the earliest domesticated organisms. People have used yeast for fermentation and baking throughout history. Archaeologists digging in Egyptian ruins found early grinding stones and baking chambers for yeast-raised bread, as well as drawings of 4,000-year-old bakeries and breweries .In 1680, Dutch naturalist Anton van Leeuwenhoek first microscopically observed yeast, but at the time did not consider them to be living organisms, but rather globular structures. In 1857, French microbiologist Louis Pasteur proved in the paper “Mémoire sur la fermentation alcoolique” that alcoholic fermentation was conducted by living yeasts and not by a chemical catalyst. Pasteur showed that by bubbling oxygen into the yeast broth, cell growth could be increased, but fermentation was inhibited – an observation later called the “Pasteur effect”.

By the late 18th century, two yeast strains used in brewing had been identified: Saccharomyces cerevisiae (top-fermenting yeast) and S. carlsbergensis (bottom-fermenting yeast). S. cerevisiae has been sold commercially by the Dutch for bread-making since 1780; while, around 1800, the Germans started producing S. cerevisiae in the form of cream. In 1825, a method was developed to remove the liquid so the yeast could be prepared as solid blocks. The industrial production of yeast blocks was enhanced by the introduction of the filter press in 1867. In 1872, Baron Max de Springer developed a manufacturing process to create granulated yeast, a technique that was used until the first World War. In the United States, naturally occurring airborne yeasts were used almost exclusively until commercial yeast was marketed at the Centennial Exposition in 1876 in Philadelphia, where Charles L. Fleischmann exhibited the product and a process to use it, as well as serving the resultant baked bread.

Yeasts are chemoorganotrophs, as they use organic compounds as a source of energy and do not require sunlight to grow. Carbon is obtained mostly from hexose sugars, such as glucose and fructose, or disaccharides such as sucrose and maltose. Some species can metabolize pentose sugars such as ribose.alcohols, and organic acids. Yeast species either require oxygen for aerobic cellular respiration (obligate aerobes) or are anaerobic, but also have aerobic methods of energy production (facultative anaerobes). Unlike bacteria, no known yeast species grow only anaerobically (obligate anaerobes). Yeasts grow best in a neutral or slightly acidic pH environment.

Several yeasts, in particular S. cerevisiae, have been widely used in genetics and cell biology, largely because S. cerevisiae is a simple eukaryotic cell, serving as a model for all eukaryotes, including humans, for the study of fundamental cellular processes such as the cell cycle, DNA replication, recombination, cell division, and metabolism. Also, yeasts are easily manipulated and cultured in the laboratory, which has allowed for the development of powerful standard techniques, such as yeast two-hybrid, synthetic genetic array analysis, and tetrad analysis. Many proteins important in human biology were first discovered by studying their homologues in yeast; these proteins include cell cycle proteins, signaling proteins, and protein-processing enzymes. 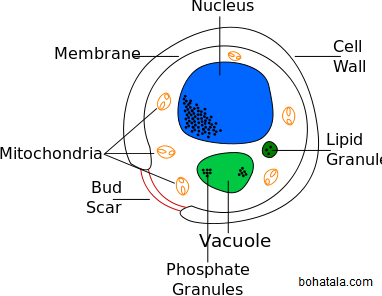 The main objective of study was to check the effect of stress condition on already isolated yeast from different environmental samples.

The isolated yeast strains were activated by inoculating then in YPD broth and incubating them at 37 ͦC for 24 hours.
Preparation for the stress conditions:

For the preparation of stress conditions, 6 sets of autoclaved test tubes, having YPD broth, were prepared in such a way that each set was labelled with U,V, high temperature, osmotic stress, high pH, less glucose concentration and controls.

Inoculation of test tubes and Exposure to the stress conditions:

After 24 hours plates were inspected and colony morphology was checked and noted in tables and compared   with controls. 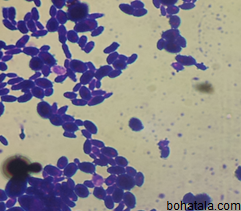 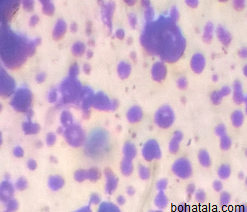 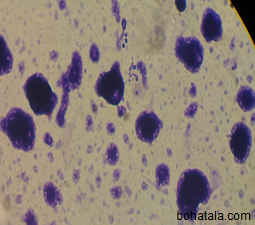 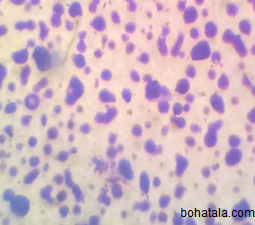 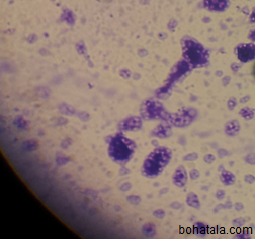 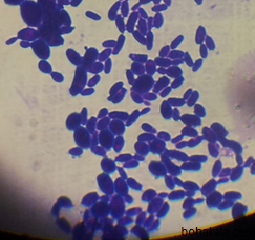 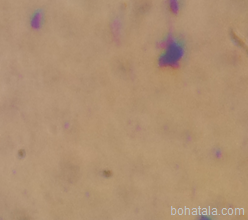 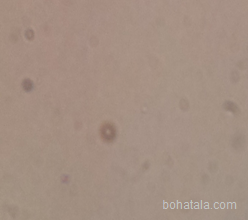 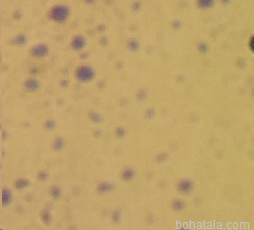 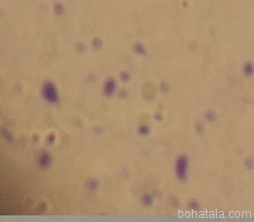 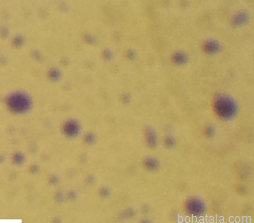 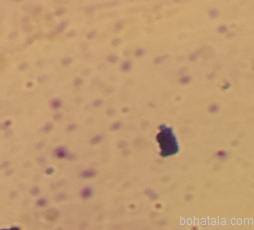 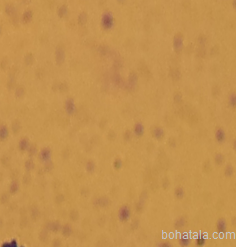 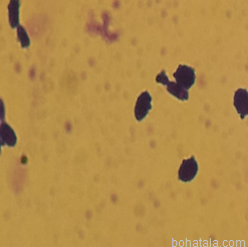 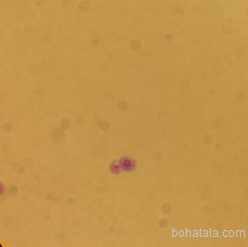 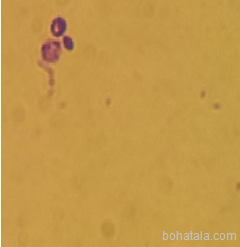 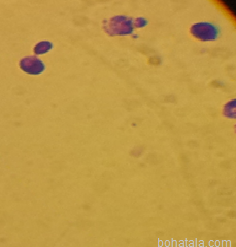 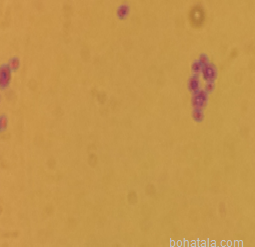 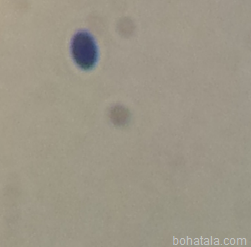 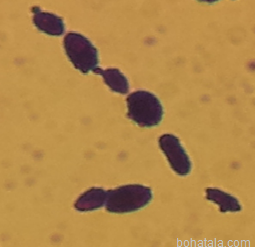 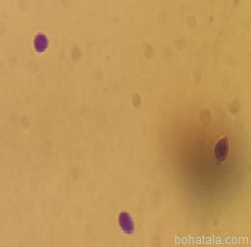 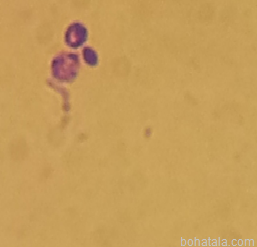 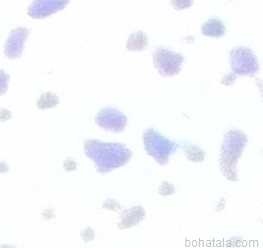 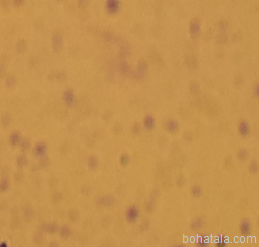 5.  Effect of  less glucose in media on cell morphology of yeasts: 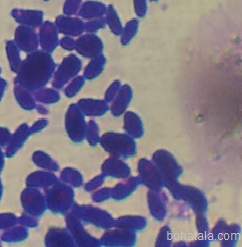 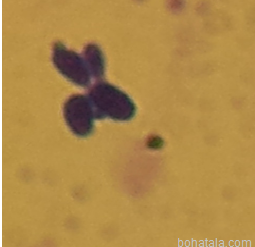 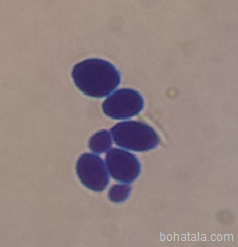 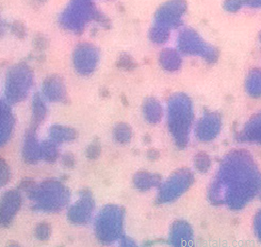 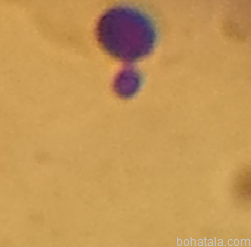 6.  Effect of  high pH on cell morphology of yeasts:

No colonies were found to grow under pH stress.

Yeasts are eukaryotic microorganisms classified in the kingdom Fungi, with 1,500 species currently described (estimated to be 1% of all fungal species). Yeasts are unicellular, although some species with yeast forms may become multi-cellular through the formation of strings of connected budding cells known as pseudohyphae, or false hyphae, as seen in most molds.Yeast size can vary greatly depending on the species, typically measuring 3–4 µm in diameter, although some yeasts can reach over 40 µm. Most yeasts reproduce asexually by mitosis, and many do so by an asymmetric division process called budding.

In the case of strain 2, the control colony showed a medium size under normal or favorable conditions but different changes were observed in the case of growth under different stresses mentioned in the tables. The reason is same that high pH cause the denaturation of enzymes as a result metabolic activity is altered and colony shape and morphology is altered along with the cell shape and morphology. That is all mentioned in the tables and figures.

In the case of strain 5 and 6 the colonies were round, smooth and glossy, having medium size under favorable conditions but as soon as they had exposed to the stress conditions their cell as well as colony morphology was altered.

Under the conditions of U.V stress the colonies showed reduced growth it was due to the fact that U.V creates thymidine dimers in the strands f DNA as a result the truncated proteins are formed and cells are not be able to grow properly under these conditions. Only those cells form colonies who have escaped from U.V either light repair mechanism or by some other method.

Under the conditions of high temperature, cells and colonies showed altered morphology because of the inactivation of enzymes. We know that enzymes are denatured and as a result metabolic activities are stopped under these conditions

Under the stress produced by high pH. The cell wall and cell membranes are disrupted due to the imbalance of ions or charge. As a result cells and colony morphology is altered.or in most of the cases cells don’t grow. Easts grow best at low (acidic) or neutral pH.

In the case of high osmotic pressure cells are shrinked due to the movement of water outside the cell and cell shows reduced growth.

Under the stress given by depletion of glucose, cells normally grow well until the glucose is present in the media after that they show reduced growth.

depletion of glucose, cells normally grow well until the glucose is present in the media after that they show reduced growth.

Yeast grow well under normal conditions but as soon as conditions become unfavorable the MAP kinase pathway is activated and cell adapt themselves to survive but this adaptation needs atleast 72 hours. But we have only exposed the cells to 48 hours as a result cells show stressed growth of cells and as well as altered colony morphology.