The Samsung galaxy S7 edge is a latest phone of Samsung, in telecom industry Galaxy S7 brings a 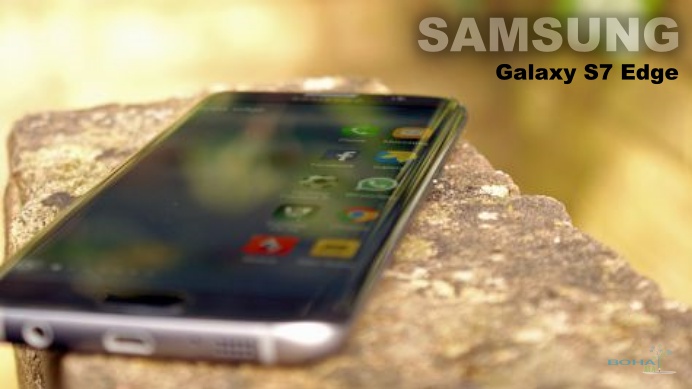 new way of thinking, it is beyond one’s thinking that what a phone could do. It is a big launch in the, with innovative perception in the industry. The phone Samsung galaxy S7 edge, stands out from a crowd, as it have curved display and flashy colors, which can attracts one to buy it. One can enjoy using Samsung galaxy S7 edge, as it is friendly to users, due to android interface, has new Marshmallow software version, which is better than a lollipop, Samsung’s take on Marshmallow as improvement is did in previous version. Samsung galaxy S7 edge has exciting features and one would love using it.

Samsung galaxy S7 edge, is bigger, flashier and is more expensive than any standard smart phone, it has awesome battery power, had turning curved screen, exciting features and extraordinary software. Samsung galaxy S7 edge, is the phone in which everything is improved, it attracts consumer demands, it has metal and glass material, a brilliant screen, the size is perfect, has expendable storage and a better battery.

Samsung galaxy S7 edge, has incredible specs, the two of important specs are its storage and battery, it has internal storage of 32GB, that can paired with the new, microSD card, user can place microSD card in the phone, and can enjoy up to 200GB storage memory. The battery is also large, 3600 mAh, which is more than Samsung previous models. Samsung phones are familiar around the world; as they are brilliant in technology. Samsung galaxy S7 edge, has curved glass back, the design is beautiful, and can give a slimmest feel to the customers, customer do not have to compromise with the big screen, it has graceful curved front and back, which can rightly fits in one’s palm. The design attracts many consumers because the design seems interesting, after the launch of Samsung galaxy S6 edge, company got profit, just due to incredible design, consumers appreciated the design, the company launch Samsung galaxy S7 edge, with more improvements in designs, which attracted customers again .

Samsung always get success, due to its good brand name and goodwill in the market, however, the services or technology they give to their customers is extra-ordinary, which force one to buy new smart phones again and again. Samsung galaxy S7 edge is designed again after keeping the consumers in mind; they have targeted the android fans, by upgrading their software, the consumers’ showoff the design with curves, in peer. The feeling of curve can make feel classy among others, as one feel different, as compared to other phones.

At consumer level the camera attracts more than any other thing, new generation love to take lot of pictures, the camera of Samsung galaxy S7 edge, is a competitive thing, camera has the autofocus, which make things obvious and clear. Camera is advance technologically, which attracts the costumers to capture the beautiful moments of life. Consumers get attracted towards Samsung galaxy S7 edge, as the phone is compatible with the latest gaming edition, many of the consumers play games at free time, and they feel relaxation and tension free while playing games. There are speedy games, in the phone; the phone is with protection, SD card save many apps, videos and images if virus occurs (German, 2016).

Samsung galaxy S7 edge, has 5.5 inches super AMOLED display tech, touch screen, dual core, that attract many consumers; this is what consumers expect from an amazing, Smartphone. The phone is much more then photos, files or data, it is incredibly easy, consumers can easily transfers the files, and sensitive data could be secured form the safely due to security. The displays have the range of brightness, which can turn on and off, the special display mode, make it easier to see. Samsung galaxy S7 edge is focused much on the excellent one-touch finger print sensor. There is the biggest improvement in the marshmallow’s new fingerprint detection. There is much more authentication, in the APls from the previous smart phones. Samsung galaxy S7 edge is also loved for its, waterproofing and dust proofing features. Unfortunately, if the phone drops off in the water, or the toilet, it will be saved. Samsung galaxy S7 edge, is best for the daily use life, this is the reason consumer get attracted towards it, the speakers are also great, there are plenty of gorgeous reasons, which still manages the great performance of Samsung phones. Samsung is building a strong, and a consistent images, from years for it consumers, moreover, the upgraded new phone is in hand of today’s people (MOYNIHAN, 2016).

Samsung galaxy S7 edge, is the great phone, because it has photographic fire power, it is comfortable to keep in hand, it has tremendous combination of processing, water resistance, moreover, it is “good enough” to satisfy one. Its fast focusing camera is wonderful, it has a lot of storage and curvy edge is a purpose for one to look cool. It has more consistent camera, it is more powerful and beautiful and best in its perfection.

There are four colors in Samsung galaxy S7 edge, which are grasp one attention to buy the extra-ordinary phone. The colors are glorious, includes, black, gold, silver and white. The black color attract many consumers, especially if consumers are fan of Samsung dark blue color, the home button and camera pod, accompany the black color, however, it is less reflective than the other colors, people would but black color if they have same children, because children can touch the phone with dirty hands, black phone never look dirty. In the case of gold color, many consumers’ have prefer this color, as gold color is mostly known as the color of Apple phones, however, gold in Samsung also appreciated by the loyal customers, most manufacturers are focused on this color nowadays, Samsung’s gold, more reflective and flashier, than its pervious gold. The white, also preferable by customers, as Samsung phones really look good in white, but in U.S, white is not a color of option, people like to buy other attractive colors, but at international level, it may be preferable. The silver color is more reflective than all colors and look beautiful when someone holds it in hand, as silver attracts like mirror, many consumers prefer to buy silver color, as it is improved like gold, then the previous Samsung phones, it is bright and flashy (MARTONIK, 2016).

The design of Samsung galaxy S7 edge, is brilliant, and good-looking, the size of battery is very good, this is because Samsung makes its own battery, the edges and curves look beautiful, the polished metal finishing attracts everyone around and the gorilla glass makes it exceptionally, a good-looking phone. It is perfect in it size; size really matters for a smart phone, too small or too big size, can frustrates one, because in too small phone one can not exactly type, what and how he/she perceived. However, in the too big size, one can be annoyed stretching the thumbs, one cannot feel comfortable in putting the big phones in the pocket. The size of Samsung galaxy S7 edge, is perfect, it is not too big or not too small (Sharma, 2016).

Like its sibling, Samsung galaxy S7, it has always on screen, it take advantage of its, AMOLED display’s ability. It is very smartly designed, as it is slim and comfortable to use, the user will never get annoyed from it. The dual pixel technology, never miss a shot, it is good and bright, the double tap on the home button, start shooting, the zoom-in is very good. The designed is focused on the beauty and elegance; they have not focused on the differentiation, because the differentiation can lead towards the negativity. The phone is gorgeous to look at; a one can manage easily full day, without charging a phone. The latest version of Samsung galaxy S7 edge is improved and better to use then the previous version like lollipop. The edge screen, is designed after keeping the new generation in mind, the new generation is very much, concerned about the phone, the design of phone attracts everyone especially the new generation.

Samsung introduce a better way to capture the attention of its consumers, the mobile payment services, from grocery store or any other favorite departmental store is very easy with your Samsung Galaxy device now. The Samsung pay, is a simple and secure application, it is designed in Samsung galaxy S7 edge, with the best available security, it can be used anywhere around the world, one can swipe or tap, the credit card. Due to the security many consumers attracted towards it, the application, is secure because it is secured with in fingerprint, there are several layers regarding security, it keep one’s payment information separate, so consumers no need to worry (samsung, 2016).

With respect to smart phone, Samsung Galaxy S7, have many different competitors, Apple iPhone 6s plus, is the biggest competitor. People who are Apple lover will never buy Samsung, for them they exciting features of Samsung Galaxy S7 does not matter. Apple remain dominant in U.S but Samsung is catching up the customers, through the innovations in the product, the Samsung have competitive advantage from Apple, because it is more friendly to user because of it android application. The new software Marshmallow is also designed keeping this point of view in mind, the loyal customer of Samsung will never move or shift towards the apple as the know Samsung also doing innovation with the products,  however, Samsung noticed the demand of silver and golden colors which attract the customers. The android software of Samsung very easily do transfer of files, videos, pictures then the other phones. Apple control 40% of smart phone market, Samsung has 31 %, however, LG and other rival take 10 % of the market share. Growth is the biggest challenge, for the Samsung, prices of Samsung new models is higher, then the other smart phones, but to maintain the market share, they are concerned more on prices. Samsung is the dominant player, in the emerging market, the competition in the market is tough, because Chinese manufacturer like, Huawai, Xiaomi, Blair etc., are also taking much of market share (Mendoza, 2016).

The Samsung Galaxy S7, is prided itself, as Samsung have the better display then, the Apple phones, there are double number, of pixels per inch, than the iPhone6s have, customers give feedback that Samsung phone have awesome results and can capture accurate image, while blurring the other things, with the help of auto focus. Samsung Galaxy S7, have more power as it have smart display, and better storage option. Last year, the camera of Samsung phones was challenged by the LG G4 in the camera quality, however, this year they are focused on camera and camera can capture wonderful pictures, and the low situation is best feature. Other smart phones set up, their games from different intelligent companies may be this year Samsung Galaxy S7, have to face stiff competition. Moreover, Samsung Galaxy S7 is the best phone, and company is going to take competitive advantage from it, Samsung have loyal customers across the world, who will buy all new models of Samsung Galaxy, at any cost.

Samsung Galaxy S7, is the choice of millions of users, customers really appreciated the new mobile by the company Samsung. It is the brilliant Smartphone; however, Samsung still need to focus on the competitors and problems, the price of the new phones need be lesser, the prices should be not too high, so the people love it more. Samsung has announced the Samsung Galaxy S7 as the most powerful and beautiful, android mobile phone. The design of Samsung Galaxy S7 is waterproof, which is the reason, that battery cannot be removed from the phone. The fast wireless charger can give the benefits at competitive edge and can attract more people to buy Samsung Galaxy S7.