Home > Projects/Reports > The Role of Black Women in Hip-Hop

The argument over the role of black women in the music industry cannot be overemphasized. It is promoting the 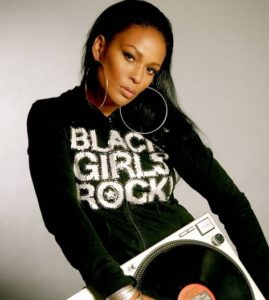 success of the industry in a very high trend, beautifying the industry, and their participation in all types of music such as rap, pop, rock, country, tagging or creating graffiti, and break dance have been tremendous. Their presence in the music industry is bringing up more challenges to their male counterpart and they have relatively increased their value in the Hip-Hop world through their talents, beauty, shapes, dress styles, trends and innovative concepts. It has become a norm and a generally accepted phenomenon that if a black woman is not in any music video, that music and the artistes wouldn’t make sales and popularity. While most Hip-Hop artistes cannot do without having them paint their music videos red, get the attention of listeners, promote sexuality through half-nakedness associated with the use of drugs and alcohols, it is also seen that many artistes of different classes and concepts have tried to prove this notion wrong and still preached simplicity to the world that this is not what should be portrayed in the industry, and making the Hip Hop world fresh and exciting (“Albert Brandon”).

It is clear that the role of black women in the industry has impacted more harm than good. They have degraded the positive image set on the industry in past centuries, imposed a great negative impact on upcoming generation, demoralized the prestige of feminism and giving the world a negative opinion about black women.

The Hip-Hop world values raps and does not build community values compared to how poetry does it. However, it is important to note that the Hip-Hop world is more than just a genre, it is a culture that has been promoted over the years, it’s all about good music, dance, dialogue among many other things and art done by this talented black women. To some uneducated individuals, they see Hip-Hop culture as violence, pestilence and ignorance. Considering the fact that they have some misconceptions they have heard over the news and social media, they however relate the Hip-Hop world to murder, money and drugs. Elites, who love and understand the Hip-Hop culture, see it as something that inspires, a desire, and aspire. From its general conception, Hip-Hop is all about expression and not for any kind of suppression.

It is evident that black women have performed a great role in the Hip-Hop world and male artistes have treated them as a collector’s item on how they display their forms of success. These artistes have put these women in their videos to really show they are living a good life, but this in fact is a façade that is greatly affecting the youths of this generation. (“Albert Brancon”). My stand is that the role of women in the Hip-Hop world is defacing this arm of the music industry and affecting our society adversely.

Some artistes argue that women’s role in the Hip Hop promotes their respects. As Feminista Jones, a woman who is a sex-positive Black feminist supports the involvement of feminism in the Hip-Hop world to actually show that the Hip Hop World wasn’t meant for the boys alone and they can make more differences with what they’ve got, she claims, “hip hop gave young people a secure avenue to feel respected by their peers in an extensive society that often silenced their great voices – maintaining the fact that respect was critical”. (qtd. In Salon). More researches and observations have depicted these women try to also join the male group for more respect. They take great risks to ensure they meet up with the standards they see the male counterpart do. They try to establish the fact that they also want greater respects from their male counterpart. The problem is that the means they achieve their respect desperately turns into a different outcome to their male counterpart and the general public.

The respect they aspire to have is not what they are getting in this present generation. Their involvement in the music industry has only but helped their male counterpart sell more. These male artistes do not acknowledge the respects they focus on getting. They refer to them with different names such as hoes, bitches, gold-differs, and trifling. (“Layne Asha”). This shows how bad these artistes have demoralized them. Many of these artistes have accepted these names as normal and they refer themselves as those names. Layne Asha pointed this that Nicky Minaj sang it in her song in order to gain attention from her competitors, and build more motivations from her listeners despite the negative meaning of the song. This is an illustration to show that the respect they intended to save is what they trade for money and fame.

Black women have also lost their respect in the face of parents who love their children to emulate better things from star artistes. The effects of their acts on the media adversely affect these young generation, most especially the young African-America girls (“Brandon Albert”). What they see greatly affect them as they also want to act exactly the same way they see these black women act on the media. Some pick one, two or more of these black women as their mentor(s) and want to talk, sing, dance and even dress like them. These young girls pick from these negative influences they see and act on them giving their parents great concern on what their children are turning to be.

The fact that many of these black women belittle themselves to make ends meet through being Hip Hop video vixens is enough disrespect to feminism. Since it had been believed that sex sells this days and it is easier to make some money through just exposure of their body, these black women do not find it difficult to perform their role in the Hip-Hop music industry. In order to make great profit, male artistes definitely find it easier to invite a large or small number of black women to feature in their musical performances and at the long run give them stipends not even up to an average of what these male artistes make per every track. “These black women negotiate little salaries just to make ends meet”. They have refused to consider their body peculiarity and find it a way of exchange for money. Therefore they find it very easy to do anything for money in the American life of today. (“Cheairs Katherine”).

Conclusively, it’s high time women started to feel better about their image, they have to stand up to oppose the derogatory words men sing against and about them. The African-American woman have to feature in hip-hop music videos to portray some level of positive culture in order to earn the respect that had long be forgotten about the black race of feminism in the hip-hop industry. They need to come to a realization that the only way to influence their generation is to portray good mannerism and reduce the disgraceful opinion that the world has against them. They also have to start to consider promoting the socio-cultural ethics of this great nation and improve on a better right thoughts and ideas on the growing generation.