Adopting an International Approach to the Local Market

A firm becomes international when it extends its activities or manages to sell its products into overseas markets (Kessapidou & Varsakelis, 2002, p. 268). The more a firm is involved in overseas markets, the greater the level of internationalization. Successful internationalization process requires a firm to adapt effectively adapt to cultural settings of the target overseas markets through a process known as localization (Nordea, 2003, p. 68). The purpose of this paper is to examine the process of takeover of French breweries by Vechtel, a Dutch brewery, during its internationalization processes. First, the paper examines three phases that occurred after Vechtel took over a French company.  It further observes the extent to which stereotyping is evident in the thoughts and words of the Jean-Pierre Courbet and Jaap Harmelen, and the impact that the culture of these two individuals had on the success of takeover of the French company. A brief comparison of the strategies adapted by Vechtel (Rotterdam HQ) and Brasseries Vechtel is given. An explanation is given of how these strategies are reconciled and how the two companies arrived at a common goal despite presence of differences in their respective national cultures. Finally, the paper explains how the overall process of internationalization of the Dutch company could have been improved. The purpose of including the above information is to identify cultural issues that organizations involved in international takeover may encounter and reflect how the cultural issues can be effectively managed to achieve success in the internationalization process.

Three distinct phases of internalization occurred after Vechtel took over the French company. The first phase involved creation of atmosphere for cultural integration and effective communication. Vechtel made a radical restructuring of the management system. Some employees who had been working for the French company were dismissed and some replaced with experts from other Vechtel operating companies. However, some key positions remained with French employees, including Jean-Pierre Courbet’s position. Most of the key management personnel understood languages used by Dutch and French and thus, there were minimal communication problems. As Schraeder & Self (2003, p. 513) noted, this phase was necessary to reduce communication problems and to create atmosphere for cultural integration in the organization. 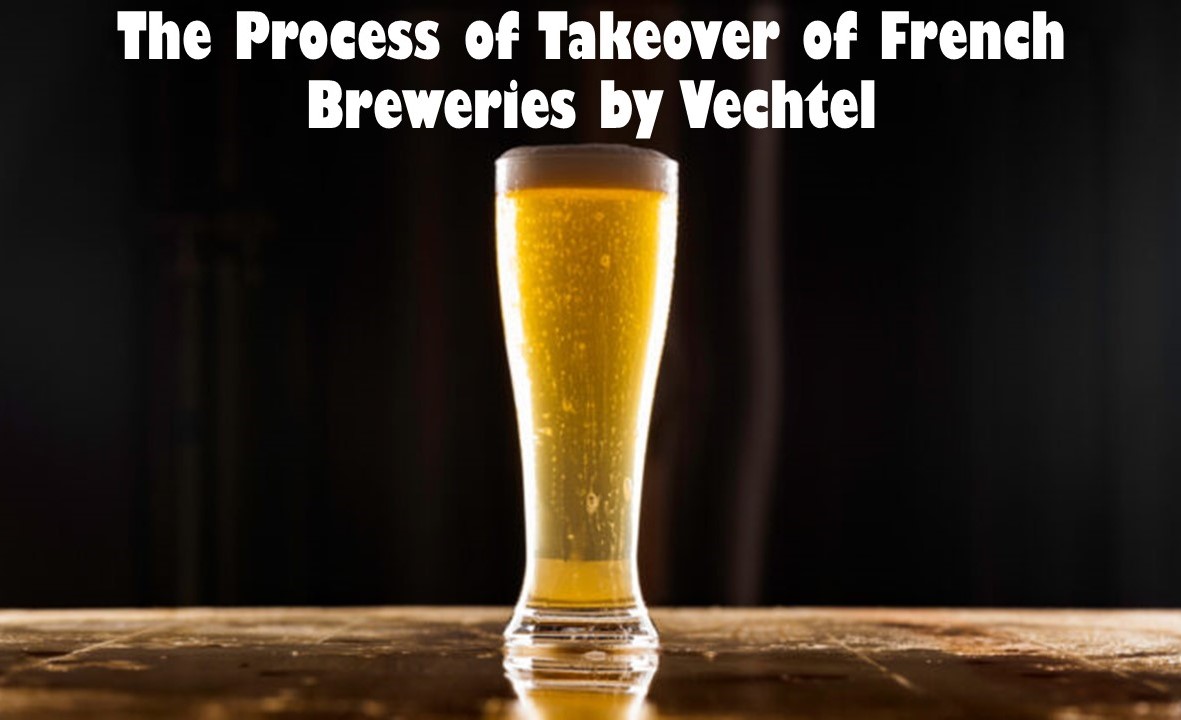 The second phase involved reorganization and integration of the functional structures and control systems. To deal with excessive financial number of breweries, deplorable set of financial figures and overlapping parts in the new organization, Vechtel closed some breweries and revised brand range. This step was essential to create identity of Vechtel as a brand within and outside the target market (Schraeder & Self, 2003, p. 513, & Riad, 2007, p. 41).

During the third phase, Vechtel evaluated the expected and actual outcomes of the acquisition.  Based on past experience, Vechtel revised the management structure through consultations, which increased involvement of Dutch employees in the organization. The Dutch chief executive in the French branch, Jaap Harmelen, was replaced with a Dutch, Jean-Pierre Courbet. This phase helped to further enhance compatibility between the cultures of Vechtel and French company. Generally, the three phases were essential in establishing cultural fitness between the two merging companies. Poor culture fit may contribute to failure of mergers and acquisitions that appear to be suitable and strategic as in the case of the merger between Monsanto and American Home Products which failed due to difficulties in trying to integrate the diverse cultures (Schraeder & Self, 2003, p. 513; Stahl & Voigt, 2004, p. 53).

The thoughts and words of Jean-Pierre Courbet and Jaap Harmelen in the case study shows that they has preconceived notions about the cultures of both Vechtel and the French company. Jean-Pierre Courbet felt that after the acquisition of the French company, Vechtel was most likely going to fire key French management personnel and replace them with Dutch employees, as the company had done in Spain. He thought that among other problems, this would lead to communication problems as in the case of Vechtel headquarters in Spain where key figures in management used interpreters. He thought that the dismissal of Dutch employees would lead to upheavals for the new company.

Though Courbet was a key player in the takeover of French company, he felt that Vetchel would likely do away with him just like it had done in Spain. Given that the takeover in France was pushed by the son of the founder of Vetchel Brewery, Courbet felt that this single reason significantly reduced the chances of the new company to succeed. As he expressed during a meeting with chief executive Jaap Harmelen, Courbet felt that Vechtel was going to interfere with operations of Inter-HRC, a distribution company whose sales included products of Vechtel competitors, as it had done in Spain. Generally, Courbet had a view that Vetchel was likely going to apply a poor strategy as it had applied in Spain, which would result in failure.

Jaap Harmelen was a chief executive of Brasseries Unies, after which he became a board member for Vechtel.  During the deliberation for Vechtel to take over French Schaefer brewery, Jaap Harmelen expressed that he had developed confidence in Courbet and for this reason, gave backing and support to Courbet plans. Thus, he had preconceived notions regarding Courbet’s capabilities.

Effect of Cultures of Jean-Pierre Courbet and Jaap Harmelen

Culture simply refers to values and norms held and shared by a group of persons or deeply held by an individual (Stahl & Voigt, 2004, p. 53). The full strength of culture is seen when divergent cultures are forced to become one as in the case of organizational mergers and acquisitions (Thach & Nyman, 2001, p. 147 & Schraeder & Self, 2003, p. 516). Thus, it is an important element of mergers and acquisitions and as Lodorfos & Boateng (2006) noted that it can be a make or break factor in the merger or acquisition equation. In fact, according to Lodorfos & Boateng (2006), a quarter of the mergers and acquisitions that take place fail as a result of difficulties in integrating the different organizational cultures. Thus, management of effective “human factor” in mergers and acquisitions is one of the most important aspects that lead to successful transition. Thus, the culture of Jean-Pierre Courbet and Jaap Harmelen had a huge impact on the on the success of takeover by Vechtel of the French company.

Strategies of Vechtel (Rotterdam HQ) and the Brasseries Vechtel (Lyons)

How the Internationalization and Localization Strategies are Reconciled

An internationally operating company cannot deny or regret the existence of international diversity, but as Hill & Jones, (2009, p. 131) argued, this should be regarded as an opportunity that can be exploited. Each country’s unique circumstances will pose different challenges requiring the development of different competencies. Different national climates create different opportunities for different innovations. Thus, if a firm adopts an internationalization strategy and taps into the target country’s opportunities, and leverage the acquired competencies, this can open opportunities and form a source of competitive advantage (Hill & Jones, 2009, p. 131; Carleton & Lineberry, 2004, p. 329). Naturally, these locally leveraged competencies and innovations would subsequently need to be adapted to specific circumstances in other countries.

This balancing act requires an organization to adapt a strategy that will optimally match the tastes and preferences of the target market in a foreign country (Hill & Jones, 2009, p. 131). Localization is the most appropriate strategy in such a case. This requires localization of strategic decision, products, R&D, use of local supplier networks, deployment of local human resources, localization of corporate image and adaptations to local manufacturing processes among others (Appelbaum, et al, 2007, p. 195; Hill & Jones, 2009, p. 132). After successful localization strategy, a firm can then translate the advantages gained into completive internationalization strategy.

The first phase involved restructuring of management systems to create atmosphere for cultural integration and effective communication. This phase could have been shortened or improved. Differences in organizational cultures and management structures are usually obvious and can be examined prior to initializing the takeover process (Trompenaars & Asser, 2010, p. 78 & Schein, 1990, p. 113). The differences recognized need to be acknowledged and incorporated into the pre-integration negotiations (Shook & Roth, (2011, p. 150). Thus, Vechtel could have reduced the first phase by examining the differences in culture and management structure with the French company and make agreement during negotiation on how the new situation would look like. Employees to be dismissed should have been determined during negotiations stage and their benefits be agreed on. This would have helped to shorten and improved the first phase.

The Takeover of Schaeffer

The process of take over of Schaeffer was optimal. According to Marks (1997, p. 271) once a target has been selected for alliance or acquisition and an appropriate takeover process has been agreed on, the task facing the acquiring company is to maximize benefits from the process. The most important ingredient to success in such a case is sensitivity to cultural differences (Marks, 1997, p. 271 & Ulijn, J., (2010, p. 136). There are many differences especially in management style which are attributable to cultural differences. Managers thus need to make allowances for those differences in dealing with their target organization. In order to maximize benefits from the alliance, it is also essential to build trust with the partner and make allowance to learn from them.

This lesson can be drawn from successful strategic alliance between Ford and Mazda as described by Tallman, (2007, p. 56). Managers of these companies engaged in meetings where they discussed not only matters pertaining to the alliance, but also took time to know each other better (Tallman, 2007, p. 56). Thus, successful takeover process of Schaefer by Vechtel, needed to incorporate the aforementioned aspects. Vechtel managers and experts set up framework of meetings with Schaefer executives, where they managed to build trust and facilitate harmonious relationship between the two firms. Eventually, Vechtel managed to purchase all Schaefer shares and those of its subsidiary, including those that were held by the public. Thus, the takeover process of Schaeffer adapted by Vechtel to was the best for that case.

Influential Elements in the Process of Takeover

There are various cultural elements that are influential in the process of takeover. One of these is the willingness on part of the target organization to embrace the vision and strategy of the acquiring firm (Buono & Bowditch, 2003, p. 142 & Gleich, et al, 2010, p. 10). Assessing how the key strategic personnel, who are business drivers of the target entity, will be retained or guaranteed continuity is also essential. It is vital to assess barriers that may exist to the emerging culture that might inhibit successful implementation strategies. Another important element is a communication plan which should be adopted to eliminate or reduce the likely incidence of anxiety to the change (Lejeune & Vas, 2009, p. 738). National culture also influences the process of takeover. Generally, there is need to asses whether the culture of the target organization and is compatible with the culture of the acquiring firm.

In conclusion, the process of internationalization takes lace when a firm manages to sell its products in overseas markets successfully. The three phases of internationalization that after Vechtel took over the French company are; restructuring of the management system, integration of the functional structures and control systems and revision of the management structure through consultations. Jean-Pierre Courbet and Jaap Harmelen expressed preconceived notions in their thoughts and words with regard to the process of takeover of French companies by Vechtel. The cultures of these two individuals facilitated the successful takeover of French company by Vechtel.

The first phase of internationalization after the takeover of French company by Vechtel could have been shortened or improved through examining difference in cultures and management systems and incorporate these into pre-integration negotiations. The strategy adopted Vechtel to take over Schaeffer was optimal and thus, it was the best. As mentioned, various cultural elements are influential in the process of organizational take over including the difference in vision and strategy, treatment of key management personal, barriers of the immerging culture to implementation and communication plan that should be adopted.