Political and Legal Environment Facing Business – Jim Cramer pointed the politics after the losses he faces, that “From an investing point of view, owning a drug stock has become a nightmare because of the fear that politicians will demonize all of them, not just the few who deserve it”. According to him, politics is hurting the market; the worse relation is between the business and government. Government is playing no role for career like technology, productivity and globalization. He discussed some drawbacks of US government, which he 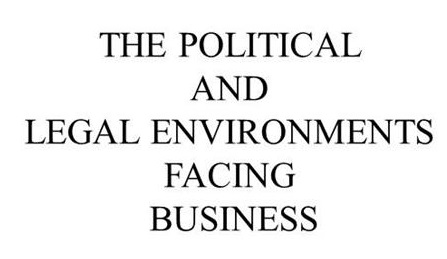 think effecting the business, the facts are, investor do not invest on stocks, due to the changing in everyday prices of stocks. He says that once oil companies were known as creator of jobs, however, now due to increase in tax, there is lose in money and presently oil companies will wipe out. He is not against the political party; he says that people will not invest in such doubtful situations. Jim Cramer also said that, “I am not suggesting that we whistle past the graveyard. I am suggesting that it is not really a graveyard, the politicians have simply made it feel like one.” (Stevenson, 2016)

The Quebec government is facing criticism in western Canada from the politicians. In Montreal, Quebec Environment Minister, David Heurtel speaks about energy pipeline project that, “Today’s motion is very simple and very clear. It signifies that whoever seeks to build a project in Quebec must comply with all Quebec laws and regulations”. According to the Heurtel Quebec, laws and regulations must be followed while constructing any project. The facts are, if any project does not fulfill the laws then it may be criticized and other states will do such oversight, make the projects without following policy and laws. He also said, “This is not only a matter of respect, but equally a question of fairness towards all companies that wish to do business in Quebec.” Heurtel wants to see equality in all states that is why he emphasis on implement and subsequent Quebec laws. (Remiorz, 2016)