The Killer Angel is a historical novel that was initially published in 1974. It was authored by Michael Shaara and 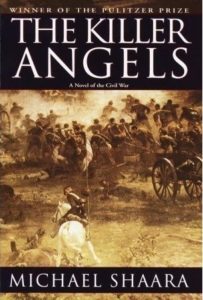 describes the battle of Gettysburg that took place for four days during the American Civil War. The story began in 1863, and it took place in Gettysburg. The novel describes one of the bloodiest battles in the history of the civil war.

The Killer Angel describes an American Civil War that took place between the Army of Northern Virginia (the Union) and the Army of the Potomac (the Confederate). The story describes one of the largest battles that have been fought in the America. The story is based on factual historical figures which insinuate that over 51, 000 people were either killed or injured at the end of the war. Throughout the novel, the author describes the obtrusiveness of death during the civil war. Michael Shaara reconstructs his story on how he piled up corpses during the war to protect himself from being killed by the bullets. He asserts that death can come at any time and men must be prepared to deal with uncertainties. Michael Shaara was successful in passing the primary idea of his novel since it reminds us of the number of people who died at the end of the battle.

The Killer Angels is novel about the Battle of Gettysburg. The leading character in the novel is Colonel Joshua Chamberlin. He is a young professor and a good orator. He is envied by Mark Antony because of power he exhibits while speaking to men. The battles beings when both Confederate and the Union armies gather at Gettysburg. The battle ensued because neither of the group was expected at the place at that particular time. General Robert Lee is described as a strong rebel was eager to deal with the members of the Union. He was committed to ensuring that majority of the members of the Union were killed especially in the areas around the Cemetery Hill. After the first days of the fight, the Southerners began singing victory songs since they were assured of victory. When the Confederates came with the range, the Union soldiers began firing their guns and killed a hundred of them. Pickett realized that he had lost the majority of his division forcing the Confederates to retreat causing the Battle of Gettysburg to come to an end. The Killer Angel is a strong and bloody story which is equal to its subject.

Michael Shaara novel has brought out the contribution of the Battle of Gettysburg in the American Civil. He has different accounts to describe the war during the four days. He has used a language that is easy to understand by outlining unbiased facts about the war. He has outlined the real issues that led to the war, and its significance to the America’s history. The Confederates lost the war after a series of victories. He has outlined the weakness of the Confederates that made them lose the battle. I think he should not have disclosed this since their enemies would be quick to learn their weakness. T Michael Shaara has described the character traits of the primary characters. Lee has been described as a tactful man, and this explains why the Union won the Battle of Gettysburg. The Union gained the first victory during the Battle of Gettysburg which depicts a significant part of the American history. The Confederate lost the battle for the first time since they lacked adequate resources and tactful soldiers.