It is fair to say that one of the most important events in Pakistan’s agricultural history with extensive e repercussions on other sectors has been the process called the Green Revolution.

The technology package associated with it generated major changes in the economic, social and political structure of the country. It forms a watershed between new and old Pakistan, while present-day Pakistan may have roots in the green revolution, a lot more happened in mid 1960s to make Pakistan what is today. 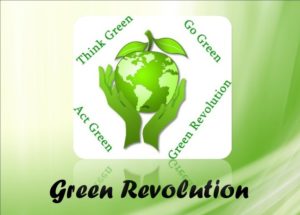 “The introduction of new technology in the agriculture sector”.

This revolution with the scientific and technological breakthrough in the form of input like high yielding varieties of seeds (HYV), fertilizer, pesticides and water.

Green Revolution is technological innovation and leave the result in the hands of God.

CR is the technological and pesticides involving seeds of agricultural output which is known as green revolution.

Green revolution is break through or remarkable increase in quality and quantity of agricultural output through the instructional technological reforms.

3. Historical Back Ground of Green Revolution

Green revolution based on agricultural revolution. Infact green revolution started with the introduction of high yielding varieties (HYV) of wheat by Dr. Norman Borlaug in 1950. Dr. Borlaug was of the view that man should not entirely depend upon nature for the production of agricultural goods. Man himself should make efforts to increase agricultural output by God. Dr. Borlaug introduced semi-duaf varieties in Mexico in 1940s and achieved the maximum yield and had made the USA self-sufficient in wheat made wheat was explored to other continents from USA.

4. Rationale Behind Green Revolution in Pakistan

Agriculture was allowed to stagnate in 1950, because the ruling elite of the country believed at that time, it was essential to industrialize at all costs and at great speed. Government policies were heavily against agriculture and it was only toward. The end of the 1950s when it became clear that growth in agriculture was necessary for the survival of the country—that the importance of the agricultural sector was recognized.

The phenomenal increase in annual growth rate of agriculture sector was observed during peak period of green revolution which was grew 11.7 percent and it maintained a high growth rate of 9.6 percent in 1968/9 to 1969/70. However these rate achieved?

5. Phases of Green Revolution in Pakistan

This increase in growth rate took place in two phases. In the first phase 1960 to 1964/5, the main cause of growth was the increase in irrigation facilities, mainly tube wells.

The second phase, between 1965/6 and 1969/70, showed impressive growth when the expanded irrigation facilities were supplemented by the technology package of high yielding varieties (HYV) seeds, chemical fertilizer and pesticides. Essentially, Hean it was the complete package of

Without any doubt, the most important ingredient in the technology package was water, and water which was guaranteed and available as a when required. It was the key variable that established the spread of Green Revolution Technology.

In the first phase, where the irrigation was the critical component of agriculture production, privately owned tube wells were the main factor responsible for the increase in water availability. Between 1960/1 and 1964/5 about 25000 tube wells were installed and farm areas serviced by tube wells doubled. In the second half of 1960s. Two HYV seeds, one for wheat, developed by the international wheat and maize institute in Mexico and other for rice, developed by the International Rice Research Institute in Philippines were introduced in Pakistan

6. HYV of Wheat and Rice Who Played a Key Role in Green Revolution in Pak

HYV seed of Mexipak of wheat variety was introduced with the personal interest of Dr. Borlaug in Pakistan. The Mexi-Pak wheat seed had been experimented in the early 1960s along with the IRRI rice seed, yielded high output. These experimental results were soon reproduced across large area of agricultural land. Since the HYV seed required large source of water, those areas that had better irrigation facilities and those that had installed the tube wells were the first to adopt those seeds. Moreover, the farmers who wanted to use the new seeds were also been sinking tube wells and the number of tube wells and the number of tube wells in the country increase from 34000, to 79,000 between 1964/5 and 1969/70.

The area serviced by tube wells increased six fold between 1959 to 1969. More than half of the irrigated area of country (6 million acres)  was cultivated with the improved seeds in 1969/70.

Fertilizer consumption also saw a dramatic increase of 150 percent between

There are several factors which are responsible for breakthrough in agricultural production. These factors mutually support each other in aiding green revolution.

The green revolution had its impact on the various aspect of farming including agrarian relation of production and exchange. The main impact of GR on economy of country are as under and we shall pay attention to the following aspects in Particular.