“The Great Gatsby” and “Winter Dreams”

“The Great Gatsby” and “Winter Dreams” 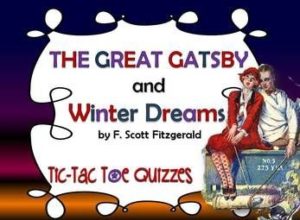 The Great Gatsby and the Winter Dreams are two comparative short stories written and published around 1925 and 1922 respectively. The stories revolve around the lifestyles of young men and women, and their ambition is life. The main characters in both are men, and they undergo the same path in life though under different circumstances and backgrounds. From the beginning we can see many similarities in both the characters but, as we proceed to the other paragraphs, we can notice the divergence in their dreams, business ventures, self-identification as so forth. The paper below compares the stories through summarizing a few noticeable similarity and differences.

There are a lot of similarities and unnoticeable deference’s that can be recorded between the “The Great Gatsby “and “Winter Dreams stories. To start with both stories point out the class rank and the standard of life the characters and their families live. In the third paragraph, the first chapter of The Great Gatsby the narrator boastfully explains how their family and the previous generations were well-to-do. The narrator Nick Carraway explains the family started by his grandfather’s brother setting up a wholesale hardware business that he passed on to his father to date. Similarly, the same class rank is brought in to attention in the Winter Dreams where the narrator explains how his father is a lucky glossary store owner though not reach. The picture of the families class rank comes clear when Dexter green decides to quit the golf courses to please and much the young girl’s wealthy status. This implies that they were not well off hence he was not happy about it.

Dexter in the winter dream works hard to pass a business course at the state university. His focus is to be rich despite his family inability to fully attend to his school needs dues to the bothering scanty fund’s situation. Dexter has the urge for glittering things, and the desire to be wealthy pushes him to work harder. After he finishes college we are told that he goes to the city borrows money to partner and set up a laundry shop, spice up the small business and within a year success follows him.  Similarly, in The Great Gatsby, Nick though not from a humble background compared to Dexter works hard through investment in the bond business to make it in life. Nick family is described as the “prominent, well-to-do” who made it in life before Nick’s existence, but He does not settle around his father’s business. Similar to Dexter he goes to a different city to start a business and struggle like anybody else to emerge a specialist in New York City.

Thirdly, both stories have some elements of romantic interests and love.  In the Winter Dreams, the author draws the picture of the relationship between Dexter and Judy Jones. Judy’s family is wealthy hence she has an extravagant lifestyle. She is skilled in romance, and we are told that she treats the men she dates horribly, but when she notices that a man is losing interest on her, she takes time to make him feel special by granting the honeyed hour.  She has the ability and makes men feel she is the unobtainable object of desire.  The images she portrays quickly traps men to quest for her and this same thing is what makes Dexter not exceptional. The story enumerates this love triangle and romance.   Similarly, there is love and romance picture drawn in the great Gatsby story through its foundations being wealth. There is a love tale between Daisy and Gatsby where the  Daisy is told have fallen in love with Gatsby after he acquired wealth and immediately she realizes the wealth was not genuinely acquired she leaves him. Also, Tom and Daisy are depicted to be in love, but later it erupts that Daisy is a money loving hence true love between her and any other man is impossible.

Both of the stories have some unsatisfactory fulfillment even amidst success. The two main characters in the stories feel unworthy and unhappy despite the fact that they live in a luxurious apartment. Love life is a big challenge to both of them. In the Great Gatsby, Gatsby falls in love with Daisy and invest his whole life hoping that she will reciprocate back with love which turns up to be lies.  The same sense of failure is seen when Dexter, he falls in love with Judy on her account of adventure and beauty and loses focus. We are told that Dexter’s desire to have Daisy was powerful enough to make him turn into a new direction despite the lifetime planning and dreams he hard.

There are complex differences between Jay Gatsby and Dexter Green in contrast to their similarities. Though their locations and characters are similar, there is a stark divergence in their businesses, self-identity, and dreams. Jay Gatsby’s fortune is gained from illegal activities such as bootleg operations and stealing bonds while Dexter Green is an elite scholar who gains honest fortune by being an entrepreneur dealing with laundry.

While Gatsby believes that he could have Daisy back in his life, Dexter undoubtedly knows that there is no possibility of Judy coming back to his life in Winter Dreams. When Gatsby becomes richer than the last time he saw Daisy, he becomes certain that he could capture Daisy’s heart. Dexter, in contrast, knows he cannot ever live up to Judy’s standards. He knows that even though he has enormous money, Judy would only flirt jokingly with him- marriage notwithstanding

Another interesting difference is how the two men relate to their dreams at the end of these two stories. Gatsby dies while still holding on to ‘the Daisy dream’; he waits for Daisy to call him even to his death. Dexter lets go of his ‘Judy dream,’ he lets the dream suffer. Dexter is seen dejected when he says” Long ago … long ago, there was something in me, now… it has gone’. While both men idolize the women they love, Dexter is not as obsessed with Judy as is Gatsby is with Daisy. Gatsby makes it his mission to change his outer life and inner life to compel Daisy to be with him. He alters his name, creates a mysterious persona. He lives a lavish lifestyle, throws extravagant parties, and the acquaintances he makes are a façade to woo Daisy and emulate the high society she comes from.

Dexter is very honest with his life and dealings; he takes time to explain to Judy how his life and his laundry business work. On the other hand, Gatsby lies about everything he is asked about. He tells Nick that he was born in Midwest of the United States then later says he is from San Francisco who is not in the Midwest.

Judy and Daisy are two components or items that are similar to their initial work but with noticeable differences at the end of their work. Unlike Daisy, Judy loves Dexter for some time in her life and strives to be with someone. Judy also moves on and falls in love with someone sheen ends up marrying judy and have kids. Judy learns to respect and love the man she marries though he is sometimes unkind to her in contrast, Daisy disrespects her husband, Tom and is unkind to him. Daisy, unlike Judy, is a careless and conceited woman while Judy is shallow fickle and full of pride. Judy cares less about how Dexter feels when she runs away unlike Daisy who cares more about Gatsby’s money than love. After Gatsby’s death, Daisy goes back to Tom.

Finally, I cannot forget to mention the different family backgrounds and the upbringing social ladder in the stories. The two stories epic the participants as from very different background one being from a wealthy background and the other from a relatively weak background.  In the Great Gatsby story as from the word go the family was wealthy. In the first chapter, we are told that they owned the best wholesale hardware store within the localities. The business was passed on from an uncle to the father.  From the father, we a not told of further inheritance rather we are told of a new journey through handwork to success. The Winter Dream story has a complete deferent set up considering wealthy and the life’s social ladder. Dexter’s father owns the second best grocery store in the Black Bear. Despite this, we are told that Dexter’s family was no well off as of that of Nick’s. We are told that even settling his school needs was a problem.

In summary the author of the two story is one person F. Scott Fitzgerald. He brings to our attention the two major protagonist characters Dexter and Gatsby who resemble his characters trying to achieve success and fall in love. The stories similarity revolve around both the protagonist characters growing up from scratch to strong business men and later they use this wealth they try to express their desire and love which turns in to a total disappointment. The difference in the two revolves around their divergence in their businesses, self-identity, and dreams. Both of the main characters are portrayed as idolizing on women up to their endings but a key difference is seen where one is not as obsessed as the other.