Signs Preceding the End of the World by Yuri Herrera

Literary Elements in Signs Preceding the End of the World

The narrative Signs Preceding the End of the World opens with an ominous and powerful sign. It shows the literal 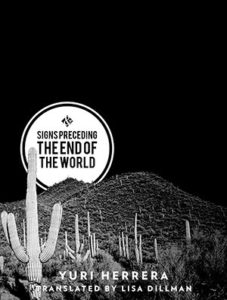 end of the world for the characters described by Yuri Herrera. A dog, a man, and a car are literary swallowed up when a part of the road is brought down by a sinkhole. Yuri Herrera renders down the message of the book carefully through the characters and literal elements to allow the reader have a casual observation of the book. The author outlines how the protagonist character Makina has navigated the perilous terrain and survived a lethal sinkhole in search of her brother. Throughout Signs Preceding the End of the World, Yuri Herrera utilizes different literary elements such as symbolism, tone, and figurative language among others to express an overall idea surrounding change and trying it to cultural identity.

Signs Preceding the End of the World illustrate the journey of Makina in search of her brother. She is a young woman who braves the lethal sinkhole between the border of Mexico and USA. Indeed, symbolism has been used extensively in the book. Yuri Herrera has a brilliant command of visual metaphors to bring out the meaning of the novel to the readers. Symbolism alludes to the apocalyptic nature of the novel and a mass exodus of the people from Mexico to the USA. A sinkhole has been used in the opening scene of the novel to convey the nature of life in Mexico City. The old man, a car, and a dog have been swallowed up by the sinkhole. ‘Slippery bitch of a city,’ Makina alludes to herself, “Always about to sink back into the cellar.” The sinkhole illustrates how life is unstable in the Mexico City. Some houses have been sent underworld to remind us how the criminals control the city. The foundation upon which the city is build is associated with criminals. Makina is forced to persuade such criminals before she can cross the border in search of her brother.

Yuri Herrera describes the landscape of Mexico as ‘villages emptied of men.’ The men are described by the nature of their weapons which is an illustration of violence and thuggery in Mexico. The men have left their villages and moved to the Mexico City to engage in all forms of violence including sexual violence that Makina encounters during her journey. The weapons are also used to describe men. The weapons also symbolize violence in Mexico City. The tone used in this context illustrates the hurdles that Makina underwent before she could reach out to her brother.

Makina is depicted as a negotiator in the narrative. Yuri Herrera has used Makena as a messenger and negotiator to develop the narrative. Makina’s role as a messenger symbolizes cultural identity. Makina works as village switchboard operator. She connects those who have left for America and the natives in Mexico. She is a female who is not afraid of speaking the truth and defending herself against lecherous fools. In this way, she performs her duties efficiently in a male-dominated society. Yuri Herrera has illustrated Makena as a messenger to symbolize the success of women because of their ability to adhere to set rules. Makena has been used to illustrate family and immigration. She lives Mexico in search of her brother. She symbolizes the love that exists between siblings in a family. She is depicted as a caring person who values family.

Yuri Herrera narrative emphasizes on several junctures such as worlds and feelings, dreams and consciousness and inside and outside. These junctures illustrate the figurative language that Herrera has used to pass the message of her narrative.  On her way to the Mexican border, Makina is guided to a door that descends to a staircase and leads to a room that is compared to ‘sleepwalker’s bedroom.’ This statement conveys a sense of unease. It describes what Makena’s life transpires to. When she is guided to a sleepwalker bedroom, one might think that she is intended to rest. However, she is compelled to keep moving between sleep and waking. In this way, she finds herself at the juncture of dream and consciousness. There is a nightmare that awaits her at every turn before she finally reaches to her brother. In her new role as a precipitator, Makina utilizes her ability to cross the border. Her ability to speak several Spanish dialects enables her to negotiate at the border.

However, Makina is introduced to a new language which is spoken by Mexican immigrants. This seems like a nod to the epic of tradition and culture. She considers this as a territory of what is yet to be born and what is dying out. The new language symbolizes the metamorphic qualities expected of her to survive in the new hostile environment. On her way, Makina encounters ‘hills of hills cementing the horizon.’ This is a figurative language that symbolizes the transition from rural to urban life. The hills symbolize the challenges that Makina encounters on her journey in search of her brother and the challenges she experiences as she travels from the rural to urban setup. She is compelled to learn a new language to allow her to survive in the city. Her dream to go through the eight hills symbolizes not only her physical journey but also the mental journey.

Yuri Herrera has used symbolism, tone and figurative language to illustrate the primary themes of the novel and allow the readers to understand the meaning of the narrative. Signs Preceding the End of the World is a narrative that examines what it takes for one to cross the border.