The current education system usually provides instructions to teachers and educators to use grades in assessing students. The grading system in education is a specific system that is used to evaluate the educational performance of a student and entirely depends on the points alone. Some of the significant purposes of instilling the grades to the student are to provide them with feedback on their achievement and progress, to be used for the various administrative purpose, and to offer guidance to the learner about their future coursework. For the regulatory objective, grades assist in decisions for student retention and matriculation as well as the placement when students transfer from one school to the other. There are many reasons why grades affect the learning progress and overall performance of the student. In this essay, I will discuss some ideas why grades are not right in the education system such as inflation of grades, poor communicator, and also reduction in the quality of thinking for learners.

Reduces the Quality of Thinking Among the Students

Both the grading orientation and learning orientation have been found to be inversely related, and any research or study conducted to investigate the effect on the intrinsic motivation of getting grade has discovered an adverse impact. It is wise to note that students lose the interest of continuing their education due to grades. In fact, once they receive negative feedback, they will tend to think less. Grades and the complete havoc they impact on the learning and teaching process affects the student’s desire to continue learning. If the primary goal or objective of education in the grade at the end of the course, the entire intrinsic motivation for the student to excel on other realms of life may not be accompanied by various extrinsic rewards in much more challenge. 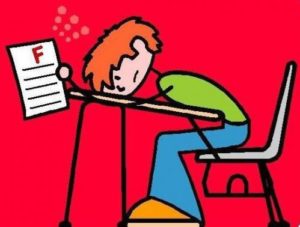 According to Virkler, on his book A Christian’s guide to critical thinking, he claims that it is common for most college first-year students to perform poorly in their first semester and to have lousy grade may affect further studies. The student undergoes many changes due to the grading of the education system and loses the self-esteem. The anxiety level of the students is often high, which in turns, reduce the ability to think critically, study, integrate, and of course, recall the information learned in class during exams or assessments. This shows that grading is irrelevant and may reduce the entire morale of the student which may affect his/her academic performance (Virkler, 2005).

Also Study: Effects of Dropping Out of Schools

Similarly, Alfie Kohn, on his article titled From Degrading to De-grading, published back in March 1999, by High School Magazine, he explains that students may lack the reading or study interest as a result of grades. He claims that those students who were graded using numerical grades are less creative compared to those students who usually receive qualitative feedback without grades. The performance of these learners who knew that they would be graded depending on their respective achievements is abysmal, and also, that student required more tasks for creative thinking. Rather than grading, Kohn explains that according to research, the highest performance in the student was found to occur only on those who were given educational comments. This validates that grades provided to the student in most of the education system affect the entire quality of thinking among the students (Kohn, 1999).

It is clear that somewhere along the educational path, there becomes an unspoken agreement that feedback is an effective communicator for the progress of the student learning. The society takes this bait; line, hook, and sinker. The variation of a student from one course to the other, teacher to teacher, state to state, and also, school to school, it can be discovered that the education system that involves grading does not place any stock in what the grading measure or communicate. However, at first, these grades are an accurate snapshot of the position of a student in educational achievements, but they do not precisely provide the parents or student with a meaningful feedback of improvement or even growth. Therefore, if parents want their children to be perfect learners, they have to demand a better way of communicating the learning progress of an individual student. In fact, it is complicated for all the involved parties in this dilemma to be transparent and accountable.

According to the Organization for Economic Co-operation and Development, marks and grades are not supposed to be a synonym for assessments. Therefore, according to their research, the grading of information on the achievements and performance of the student to make career-path or instructional decisions is not the perfect way to communicate the abilities of a student. The evidence that is applied to gather some marks is therefore supposed to be valid and measure what they are intended to measure, but not other factors. According to their study, the instrument to evaluate and present the achievements of a student are supposed to reduce the measurement of error achievement. If the grading has to reflect behaviors, both successes and actions are supposed to be reported separately with a precise and accurate emphasis on the intrinsic motivation (Development, Organisation for Economic Co-operation and Development, & Organisation, 2013). According to this organization, when both of the practice and achievement are explicitly decoupled from grades, and grades presented in a comment or just feedback, it tends to improve the performance of the student. It is hard to achieve effective grading practice, and some researchers argue that the only grading practice that is effective is replacing the grades or marks by an individualized narrative assessment for every student. This shows that grading is a poor communicator on the performance as well as behaviors of the student while learning and may have an adverse effect if applied to the students.

In the current education system that involves grading, parts of the reasons that are considered during grading are the cycle of interaction that typically happens between the student and the teacher. Most parents usually depend on the grades to communicate the progress of their children, and this makes the students feel pressured in attaining perfect grades and working hand. In most schools, teachers examine or assess the learners work and then assign a particular feedback in the form of scores, which is a typical cycle in the grading education system, but there is another step. If the grades that are assigned to a particular learner does not align the perceptions of their parents, there is an awkward conversation that ensues. Therefore, to avoid such embarrassing discussions, teachers tend to inflate grade by awarding some more point to the student or skewing the assigned grades toward the higher end of the spectrum.

Although grade inflation is widely perceived as harmless, it has many adverse effects on the learner’s future. According to Kevin Buice, on the article The Effect of Grades Inflation on College-Bound Students, he argues that with the padding that grades inflation supplies, the student will not have to work hard or study in order to receive a passing grade. This defeat the entire purpose of educating a child, which is to challenge the student through many complex and straightforward disciplines, hoping that they will develop critical as well as logical thinking skills (Buice, n.d).

According to Justin Marquis, on the article Why Student Should Fear Grade Inflation published by OnlineUniversities website, Marquis claims that for students, grades inflation means never understanding where they stand and make the student not to work hard to achieve a particular performance. He also says that it is a cultural demand that requires instant attention and gratification. Marquis claims that having things come easily does not develop or build the kind of fortitude as well as ambition that are necessary for the shifting and challenging global economy. Man research and studies have been done on grade inflation, and faculty members are required to maintain their academic rigor to students on hand as possible. One thing that causes grade inflation is grading system itself. Therefore, the current education grading system pushes teachers and instructors to inflate various students grades, with the aim of displaying a high level of performance on their students, to gain a considerable amount of reputation (Marquis, 2014).

On the other hand, having said all this adverse effect of grading and reasons why grades affect the performance of students in the current education system, grades have positive results. Grade provides feedback about the achievements of the student. One of the essential purposes of grades is to offer feedback on the entire performance of the students. This is the most common type of feedback that students receive in all typical lessons. Grades also provide a convenient summary of the performance and inform all the involved as well as the interested parties on the achievements of the students (Nitko, & Brookhart,2007). However, it is not guaranteed that grades will reflect the performance and progress of the student, since students may memorize the entire course without necessarily understanding the concepts involved. This will make them get an excellent grade, but do not know.

It is, therefore, clear that grades affect the learners’ performance. In this essay, I have explained various research and studies conducted on the position, effectiveness, and relevance of grades in the education system and found that grades have adverse impacts on the critical thinking, and the ability of the student to think. Grades are also responsible for the grades inflation in most institutions and acts as a poor communicator of the students’ progress.

Comparison Between OSPF and ISIS