The Big Short has the genres of biographical, comedy, and drama. The film is about the financial rubble, which had occurred in 2007-2008 and was caused by the US housing bubble. This film was also chosen for the Oscar award and is actually based on the book of Michael Lewis of the same name. This film is simply about the reasons and choices, which caused the financial rubble. The people who had predicted this rubble had gone on wrong ways, as they knew that the crisis was upon them. This event had caused them to doubt their own morality.

The whole system of the finance on an official level is difficult to grasp, however, the basic thing that you can get from the film is that, when on an official level, you cannot simply choose what you want to do without considering its effects on others. You cannot take short ways and path so to achieve what you want meanwhile ruining the life of others. In the film you will learn about CDOs, MBS and CMO. Although, it is hard to grasp the total meaning behind but it is rather easy to understand on the surface level. 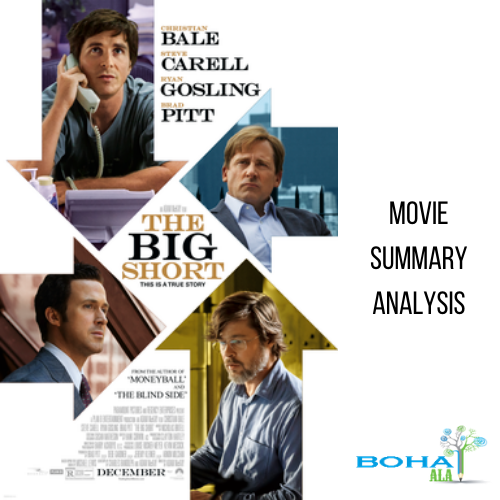 When a choice comes at the official level, you cannot only think about yourself. You have to try and understand what might be the consequences of the decision that you are going to make. You have to understand such and you cannot approach into anything hastily. When a situation is bad, others might seek their advantage from it and they will try their everything in order to gain what they desire for. You will have to stand strong and no matter don’t lose the ground. Meanwhile, it is a human nature that whenever you are in a big position, you get the second thoughts to simply take the short routes and cheat so to gain what you want but you cannot succumb into the desired which are threatening the prosperity of others.

Greed is corrosive as it slowly and slowly eats away the insides of a human and it doesn’t stops until the human wants it to stop. Greed is one of the seven sins and it is only categorized in such because of its corrosiveness in the human society. The movie shows only one point and that is only because of greed, everything fell from the hands. It was due the greed of Wall Street that the Global economy was completely ruined and people who wanted to take advantage from it also ruined as they were also doing it out of greed.